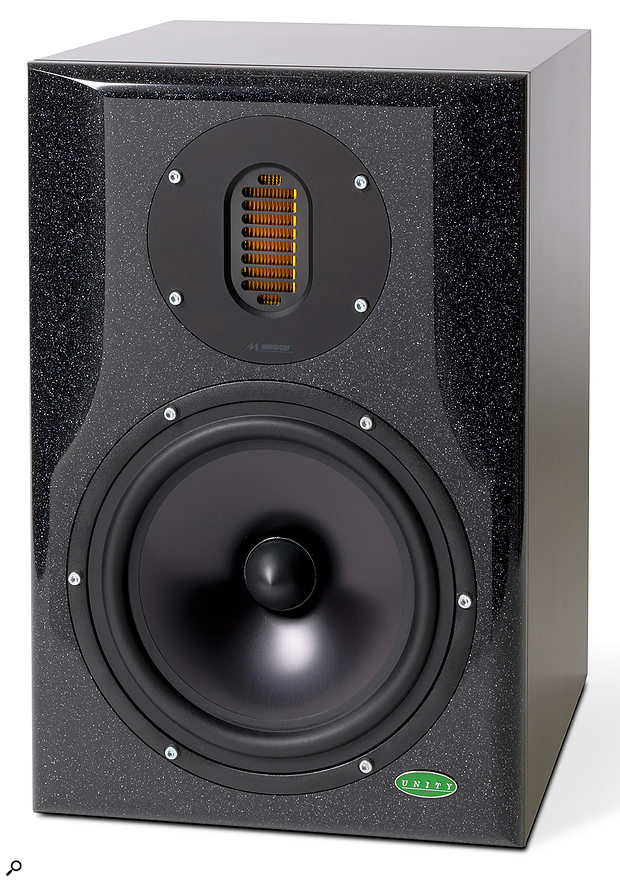 We fire up the latest model in Unity Audio’s geologically themed monitor range to find out just how much it rocks!

British pro-audio distributors Unity Audio are probably just as well known today for their individual range of high-end studio monitor speakers, most of which have been reviewed in Sound On Sound over the years. The starting point was the original Rock monitor (April 2010), a modestly sized, nearfield, active two-way design featuring — quite unusually for the time — a sealed cabinet. It incorporated a distinctive pair of ELAC drive units, the seven-inch bass driver having an aluminium veneer and the tweeter being a folded-ribbon or ‘Air Motion Transformer’. The Rock’s discrete, bipolar, Class-A/B amplification was designed by Tim de Paravicini and, in another unusual design choice, featured output transformers.

That original Rock model was replaced with a MkII version a couple of years ago, although the changes were fairly minor and mostly involved tweaks to the amplifier to improve the bass extension and dynamics. The motivation for those updates came from the experience of developing the company’s much larger, three-way Boulder monitor (August 2012). The Boulder design has since been upgraded into a MkII form as well (June 2015), although the changes there were rather more substantial, with new bass drivers and a larger cabinet.

For 5.1 surround systems, or those who just like flapping trouser legs, Unity also introduced a powerful active subwoofer to work with either the Rock or Boulder monitors, called the Avalanche (January 2014). And two later additions to the family filled out the opposite end of the range, with a very small two-way desktop monitor called the Pebble, and a matching ‘bass enhancer’ called the Bam Bam (December 2014).

This is a very impressive monitor range, with a full suite of models to suit most applications. However, it became apparent to Unity Audio that, for many customers, the step up from the Rock MkII to the Boulder MkII was just a bit too great, both in terms of cost and physical size. What was needed was something smaller than the Boulder, but capable of more SPL and bass extension than the Rock. That gap has now been filled with the introduction of the Super Rock. Don’t be fooled by the name, though: the Super Rock is actually more closely aligned with the Boulder MkII than the Rock MkII, at least in terms of the core components, although it does retain the two-way configuration and form factor of the Rock II.

When the design aim is to deliver greater SPL and more bass extension, it’s inevitable that a larger bass driver will be required, and so instead of the seven-inch ELAC unit used in the Rock MkII, the new Super Rock employs an eight-inch (220mm) SEAS woofer with a black aluminium cone and a prominent conical ‘phase plug’. This looks like the same driver used in the Boulder II, but apparently it has different technical parameters to suit the altered demands of the Super Rock’s smaller sealed cabinet. However, it does still feature the same long voice-coil motor assembly design to deliver high power handling with very low distortion.

An obvious knock-on from the decision to use a larger bass driver is that the cabinet needs to be larger to accommodate it, too, and so the Super Rock measures 268 x 406 x 354mm (WHD). That’s roughly 48mm wider, 81mm taller and 64mm deeper than the Rock MkII (so roughly 24 percent taller and wider). In comparison to the Boulder MkII, the front baffle width is actually the same width, but the Super Rock is 208mm shorter and 25mm shallower. So dimensionally, the Super Rock sits neatly between the Rock MkII and Boulder MkII — exactly as requested!

Just like the Boulder MkII, the Super Rock’s cabinet is constructed from nine-ply Baltic birch plywood, which is 18mm thick and features substantial internal bracing, while the front baffle is carved from 30mm Corian. This is a massive step up in constructional rigidity compared to the Rock MkII, which uses 12mm birch ply in the cabinet and a 12mm Corian baffle — the extra strength being needed to handle the greater SPL and bass extension. At around 15kg each, the Super Rocks are about 4kg heavier than the Rock MkIIs, although that won’t trouble the impressive height-adjustable Monolith stands that Unity Audio also make to support their monitors.

Another design feature borrowed directly from the Boulder MkII is the inclusion of strongly chamfered baffle edges either side of the tweeter, and more rounded baffle edges generally. Both of these changes help to minimise edge diffractions and improve stereo imaging.

Whereas the Rock MkII and Boulder MkII use ELAC folded-ribbon tweeters (and an X-Jet coaxial unit in the case of the Boulder II), the new Super Rock has switched allegiance to a Mundorf ‘Air Motion Transformer’ unit. This is another folded-ribbon tweeter, with the same superb transient response and extremely low distortion. Its different dispersion characteristics and power handling have allowed the crossover frequency to be lowered to 1840Hz (from 2.7kHz for the Rock MkII), which is the optimum for best integration with the larger bass driver.

The Super Rock’s amplifiers are the same de Paravicini design as those in the Rock MkII and Boulder MkII, although there have been a few component changes, including the use of some Mundorf capacitors in key positions. Total power delivery in the Super Rock is 100W, the same as the Rock MkII, but collectively the new drivers, larger cabinet, and amplifier tweaks enable the Super Rock to deliver around 5-6dB more SPL than the Rock MkII — so roughly 111dB SPL for one unit at one metre on axis. Meanwhile, the LF response’s -3dB point has moved down to 35Hz from the Rock MkII’s specified 37Hz (the Boulder MkII manages 32Hz). The Super Rock’s published specifications show a frequency response chart which is commendably flat and very well behaved, just like all its siblings.

I ran the Super Rocks alongside my reference three-way PMC IB1s (powered by a Bryston 4B SST2 amplifier), auditioning a wide range of pre-recorded reference tracks, as well as various mix and mastering projects of my own. The Super Rocks are very obviously larger and chunkier than the Rock MkIIs, but I would still describe them as (large) nearfield monitors rather than bestowing on them the midfield label that sits more happily with the Boulder MkIIs — although the Super Rocks can be used quite happily in a midfield setting if the control room was set up that way.

Hooking them into my system was simple, with both electronically balanced XLR and unbalanced RCA/phono connectors on the rear panel (along with an integrated IEC mains inlet, fuse holder and on/off switch). I actually controlled the Super Rocks from a Grace Design m902, which was being fed the same sources as a Bryston Sp1.7, which was driving the PMCs. This allowed me to match levels and switch easily between the two systems for straight A/B comparisons.

My overriding impression is that although the Super Rocks look like Rock MkIIs on steroids, they sounds more like Boulder MkIIs, with the greater acoustic power and LF extension. The latter is a relatively subtle improvement, but the increased power and headroom is far more obvious and will certainly be a very welcome benefit when tracking. Sometimes you need that extra volume to excite the room, or to pick up unwanted low-level noises, and the Rock MkIIs aren’t quite up to that kind of abuse.

The low-end extension is a benefit too, of course, especially when mixing (assuming a well-sorted listening environment), but I didn’t ever feel that the Rock MkIIs were particularly lacking in this respect, probably because the relatively gentle LF roll-off associated with the sealed-cabinet construction keeps deep bass more audible to lower frequencies than ported systems anyway. Having said that, the Super Rock is clearly capable of moving much more air, and that brings real benefits in delivering a convincing weight and power from low-end instruments, even at moderate listening levels.

With the new AMT tweeter and much lower crossover frequency, I was concerned that the mid-range character might lose out compared to the superb resolution of the Rock MkIIs. However, I needn’t have worried: the design team at Unity Audio have clearly spent considerable time and effort optimising the integration of these drive units, because the sound is beautifully balanced, with a superbly clean, detailed and neutral mid-range. My perception is that the stereo imaging is notably better, in fact: I found the Rock’s stereo imaging rather sensitive to the room and toe-angles, and they seemed fiddly to achieve broad, stable imaging with. In comparison, the Super Rocks seem to have noticeably better dispersion, and produce a more focused and stable image with greater depth cues, without really trying too hard. Whether that’s due to the different tweeter, the more pronounced baffle chamfering, or a combination of both, I couldn’t say, but it’s definitely a good thing!

In previous reviews I’ve found both the Rocks and the Boulders to be excellent professional high-end monitors, capable of revealing both the flaws and successes of different mixes with ease and precision. They both possess very good mid-range detail and clarity, a beautifully open high end, superb definition of bass instruments, a fatigue-free nature, and an overall balance which is the perfect definition of neutrality! They have a ‘British’ sound balance without any hyping of the highs and lows, or the ‘pushed mid-range’ favoured by some manufacturers. The Super Rocks maintain that neutral theme unerringly, while confidently bridging the performance gap between the Rock MkII and the Boulder MkII. For me, the stand-out feature is the markedly improved stereo imaging, but many will revel in the greater power and weight for only a modest increase in size compared to the Rock MkII.

Needless to say, with the quality of the drive units involved here, the bespoke amplifier designs, and the unusual cabinet construction, the Super Rocks aren’t cheap monitors. However, they are priced sensibly in comparison to peers of similar quality, and the price places them almost perfectly midway between the MkII Rocks and Boulders, costing almost 70 percent more than the former and 60 percent less than the latter! Overall, I think the Super Rock is probably Unity Audio’s best monitor speaker to date, and if your budget stretches far enough I’d strongly recommend an audition.

Staying in the Unity Audio family, the smaller and less powerful Rock II two-way monitors cost around 70 percent less, while the larger three-way Boulder IIs are around 60 percent more. At around the same price as the Super Rock in the UK, options include the Amphion Two18, PSI Audio’s A214-M and A21-M, ATC’s SCM20A SL Pro, Geithain’s RL904 coincident three-way monitor, and Genelec’s rather odd-looking 8351 three-way model.

Borrowing heavily from the Boulder II and boasting a brand new tweeter, but with the Rock II’s two-way format and form factor, the Super Rock sits perfectly between Unity Audio’s two high-end monitors in terms of power, headroom, bass extension and size, while retaining the precision, neutrality and balance we’ve come to expect.