Apple have ditched the feline theme and gone Mavericks, but what does that mean for you?

OS X Mavericks has been with us for a couple of months now. It comes on all new Macs and, being free to download for anyone on OS 10.6 or later, is a hugely tempting prospect for many Mac users, but how is it working out in reality?

For many studio people it's the return of decent multiple display handling that is Mavericks' number one feature. Where OS 10.7 Lion and 10.8 Mountain Lion wouldn't allow more than one full-screen app to be displayed at a time, and would fill additional displays with an unforgivably useless grey 'cloth' backdrop, Mavericks imposes no such restriction.

Visit System Preferences, and the Mission Control pane, and you'll notice a little tick box: 'Displays have separate Spaces'. This unassuming but wonderful new option does away with the behaviour of those pesky Lions for ever, and means that full-screen apps can expand to take up an entire display 'space' completely independently of anything else that's going on. So you can run multiple full-screen apps side by side, or next to fully functional, conventional desktops.

The way it all works becomes even more clear if you press F9 to go into Mission Control. All the techniques I described in the May, June and July 2013 Apple Notes columns still stand, including creating, deleting and reordering spaces. As before, you can switch between spaces as you work using Ctrl and left/right arrow keys, but now only the display that currently has 'focus' (ie. the one you clicked in last) will switch. This is brilliant! Mission Control as a whole seems to make a lot more sense too. In fact, it makes you wonder what took Apple so long...

An added bonus of these 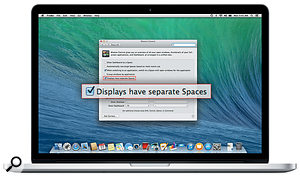 The new version of OS X — Mavericks — promises both feature enhancements and performance improvements, and it's already working out well for many early upgraders. Spaces/Mission Control improvements is having menu bars on all your displays, so you never face those 2000-pixel lunges from one display to another just to call up a single menu command. And Dock access too, so long as you have your dock's position set to Bottom (look in the Apple menu / Dock for quick access to that setting), and use a conventional horizontal (rather than vertically stacked) display arrangement. The dock won't actually appear on all displays simultaneously, but it'll be there when you need it. Just mouse to the bottom of the screen and it'll spring up as if you had Dock Hiding turned on.

The March Of Time

A whole range of Mavericks technologies seem to have been designed with power efficiency and battery life in mind, including Compressed Memory, Timer Coalescing and App Nap. They're discussed in some detail in an interesting Apple PDF that's linked from www.apple.com/osx/advanced-technologies, but with no user-facing options there's not much any of us can actually do with them, except enjoy the benefits.

Are they being delivered at the cost of raw performance though? Well, the answer I got from benchmarking the admittedly miniscule sample of two Macs I'm currently using — a 2011 i7 MacBook Pro and a 2013 i5 MacBook Air — is an emphatic 'No'. I ran Geekbench (www.primatelabs.com/geekbench) before leaving OS 10.8 and again after installing OS X Mavericks on each machine, and in both cases their performance score rose significantly, and for the older MacBook Pro by nearly 10 percent!

As for Mavericks' compatibility with pre-existing apps, plug-ins and drivers is concerned, things seem promising on the whole, but you shouldn't assume anything. For example, versions of Propellerheads' Reason prior to v.6 are irreparably broken. As I write, about half of Rogue Amoeba's audio apps are compromised (though updates are coming), and I've read sad stories of older, unsupported audio interfaces with proprietary drivers becoming non-functioning in the new OS.

On the other hand, a vast array of software by most major developers seems to have come through into Mavericks completely unscathed — at least if it was working in OS 10.8. It may seem obvious, but checking developer web sites and trawling (or starting) forum discussions is by far the best bet for gauging if a Mavericks upgrade will be trouble free or not. And when you do jump, just make sure you leave a nice, fresh, recoverable backup of your old OS behind you.