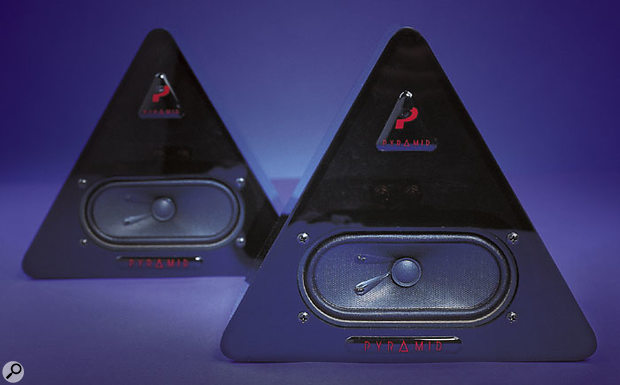 These monitors may look good, but they're actually meant to sound bad! Specifically, they are designed to replace the Auratone 5C and Yamaha NS10M as the discerning mix engineer's 'grot box' of choice.

When I started working in music studios, the idea of near-field monitoring hadn't really been conceived. However, if you weren't monitoring on the big speakers, you were using the little Auratone 5C Cubes, usually plonked on the console's meterbridge. These were the classic 'grot box' of the day — a simple wooden cube housing a single driver in an infinite-baffle configuration. The idea was that if the mix sounded well balanced on this terrible little speaker, it would sound okay on anything — a very simple, but surprisingly reliable rule. After the Auratones came the infamous Yamaha NS10Ms which, although a two-way design, shared many of the same characteristics and served the same purpose.

The reason why the Auratone and the NS10 have survived the test of time, and become indispensable tools to the majority of accomplished mixing engineers, is all to do with their skewed frequency response, lack of LF resonances, very low distortion and remarkably accurate transient response behaviour — all of which are inherent qualities of infinite baffle designs using small, responsive drivers. In fact, the Auratone is the more precise of the two models mentioned, simply because it employs a single driver — the NS10s two-way design allows greater volume and dynamic range, but has a deleterious effect on the transient response!

The two most critical aspects of a rock or pop music mix are the ratio between bass guitar and kick drum, and the balance of mid-range instruments — the snare drum, guitars, keyboards and voices. Speakers like the Auratone and the NS10 are particularly good at exposing mid-range balance errors because of frequency responses which rise smoothly to a peak around 1.5kHz and then fall smoothly away again. This means that the middle of the audio spectrum is emphasised in such a way that small changes of balance become very obvious. Hence, if the mix sounds right, it is right and will translate far more consistently to other systems, whether quality hi-fi, in-car, or 'cheap and cheerful' portable radio. The problem in balancing the bass guitar and kick drum is often to do with 'overhang' — a low-frequency resonance largely inherent in ported (reflex) speakers, which masks the true envelope of low-frequency signals. With no port to resonate, infinite-baffle speakers tend to have very accurate transient behaviour, and this makes it far easier to hear what is really happening with those low-frequency instruments.

Small, single-driver, sealed-box grot boxes can therefore be very useful for polishing a mix, but both the classic Auratone 5C and Yamaha NS10M are obsolete and no longer available. A recently introduced alternative is the Pyramid, produced by an American company called Triple P. This is a very simple design which shares many characteristics with the Auratone, but is shaped rather differently!

As the name suggests, the cabinet baffle is triangular, with a rather odd-looking elliptical drive unit mounted close to the bottom. The driver cone is made of paper, measures roughly 110 x 50mm, and has a 5W, 8Ω rating. A large air-cored inductor coil is glued to the back of the magnet and wired in series with the voice coil, presumably to provide a degree of high-frequency attenuation. The cabinet itself is completely sealed (infinite baffle) and made entirely of a dark-brown translucent acrylic plastic, and the rear panel carries a pair of binding posts that also accept the usual 4mm banana plugs.

Each cabinet panel is glued to its neighbours, and the driver unit, although secured to the front panel from the outside with screws, seems incapable of fitting through the aperture. Therefore, removal of the driver for repair or replacement would appear to require breaking the plastic cabinet apart! [We asked DACS, the UK distribution company, about this and they confirmed that user servicing was indeed not possible, but that the power handling of the monitors was such that drivers apparently blow very rarely during normal use. However, they also said that they would be happy to swap out such faulty units free of charge during the two-year guarantee period — Ed.]

I found these little speakers to perform remarkably well in their intended role. It is worth remembering that on first auditioning these speakers won't impress at all — but they aren't meant to. Check a few of your own mixes with them, though, and their raison d'être will quickly become obvious. They seem able to handle realistic mixing levels without strain, image reasonably well, and the intentionally 'middly' frequency response certainly makes this critical part of the spectrum very transparent and open. There is, naturally enough, no bass response to speak of, but this also helps the mix engineer to make sure the equalisation of bass instruments, and their relative balance, is optimal. In comparison with NS10s, the Pyramids seem very bass light, but I don't see this as a particular disadvantage.

I tried a few simple remixes using the Pyramids and found these speakers to be extremely revealing of less than ideal balances, such as between vocals and backing instruments, for example. I was usually left in no doubt exactly where the faders needed to be when using the Pyramids, whereas it didn't seem to matter much when mixing with some budget 'monitors'! The pyramids also highlighted mistakes in bass instrument equalisation very well, such as with a jazz band recording where poor EQ had allowed the kick drum to disappear entirely on anything smaller than a pair of full-range monitors — oops!

The traditional grot box is an essential tool for mix engineers, but not all of them are born equal. The Auratone and NS10 are pretty much unique in this role, and while few would choose to listen to them for pleasure, they are well suited to the task of fine-tuning a mix. I think the Pyramid may well acquire a similar reputation in time, as it seems to exhibit all the right qualities, and at about the kind of UK retail price I'd expect. Given that many home studios are running powered monitors, it would perhaps be worth Triple P considering the launch of a powered Pyramid as well, to compete with the likes of the Fostex 6301BX, the Yamaha MS101, or the Sony SMS1P, especially as none of these speakers are as critically revealing as the Pyramid.

Overall, then, the Pyramid is an effective grot box which functions well in lieu of the traditional classics. Add in the striking (even attractive) styling, and I'd say that the future should be bright for Triple P.