Can this mic preamp really deliver 'expensive' sound quality at a mid-market price?

True Systems have added to their range of mic and instrument preamps with the P-Solo, and appear to be aiming to provide the audio quality of an expensive unit, but at a mid-market price. I was keen to put it to the test as, if it can deliver on its promise, it should appeal to the project studio owner and the audio professional alike. 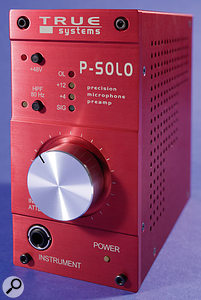 The P-Solo is a single-channel, stand-alone preamp based on the circuitry used in the existing True Systems Precision 8 and P2 Analog preamps. As in the case of those units, the design aim is to achieve extremely low noise and distortion: they are designed for accuracy and transparency rather than to add a particular flavour to the sound. According to the paperwork, military-grade, hand-matched components are used in critical parts of the circuit, which contributes the ultra-clean signal path for which True Systems devices are known.

The balanced dual-servo topography they have chosen minimises the number of capacitors in the audio path and provides a DC-coupled output. This means that the preamp needs no audio transformers, and so avoids their tendency to add coloration or distortion to the signal. While transformer coloration can be musically flattering, there's much to be said for starting out with the most accurate source possible and adding such processing as may be required later. This 'servo' approach is also one of the reasons the lower frequency limit of the units extends so much further down than typical AC-coupled designs, where very high-value coupling capacitors would be required to give the same low-end extension.

As with the Precision 8 and P2 I mentioned above, the P-Solo circuit comprises both discrete components and integrated circuits, while the generously rated internal power supply is a traditional regulated linear design that helps the circuitry achieve a fast transient response. Because of the higher than usual operating voltages, the preamp circuit has a wide dynamic range and plenty of headroom. Though the P-Solo is a no-frills spin-off from its more expensive two- and eight-channel siblings, the audio circuitry is essentially the same, so no compromise in audio quality has been necessary to meet the price point. Although not exactly entry level, as the manufacturers claim, the unit is still very affordable for anyone wanting just one very high-quality preamplifier.

Housed in a red anodised metal case, the mains powered P-Solo stands upright to minimise its footprint and its sleek, clean-cut lines appear to mirror its audio design intentions. It is an extremely simple unit. The rear panel offers just a mic input, with both XLR and balanced jack line outputs, while the front panel sports a high-impedance instrument input jack. Plugging into the instrument jack takes priority over the mic input. A large knob adjusts the preamp gain, and incorporates a click switch at the anti-clockwise end of its travel that switches in a 10dB attenuator pad. Up to 64dB of microphone gain is available, though very high signal levels (up to +25dBu) can be accommodated by switching in the pad, which sets the input gain to -14dB. There are also two buttons with status LEDs, one for activating the phantom power and one for switching in a low-cut filter at 80Hz. 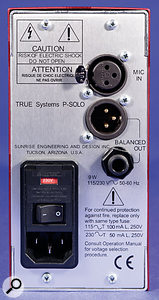 The P-Solo's metering comprises just four LEDs, indicating Signal Present, +4dB, +12dB and Overload. This set of metering values is well chosen for a preamp that will be used in conjunction with an analogue-to-digital converter, as these tend to require high input levels to achieve maximum dynamic range. The basic metering is perhaps the only evidenc eof corner-cutting, but since the preamp is clearly intended to be used mainly with DAW-style recording systems (or hardware recorders with their own metering), it isn't a serious issue, as the usual practice is to set recording levels using the metering provided within the DAW software.

The overall standard of construction is good and the unit is very neatly put together. Three glass-fibre circuit boards are used — one for the audio circuitry, one for the power supply and a further very small board to hold the metering LEDs. There are four Burr Brown op-amps in the audio path, along with a small number of discrete semiconductors. The combined IEC mains inlet and switch has a metal shell for screening and grounding, wiring has been kept to a minimum and all mains voltage-carrying pins are correctly sleeved.

Although specifications can't tell you everything about the way a preamp sounds, they can give some indication as to the integrity of its signal path. At a gain of 40dB, the P-Solo's frequency response extends from an astonishingly low 1.5Hz to 500kHz (+0/-3 dB), so even at higher gain settings, where the high-end response will inevitably be reduced, there is still more than adequate bandwidth. Frequency response is actually a rather clumsy way of measuring the transient performance of a piece of equipment, as it changes both with gain and with the amplitude of the signal passing through the various stages of the circuitry. What really matters is how quickly the voltage can change, a parameter known as the slew rate. In the case of the P-Solo, the slew rate is a very lively 40 Volts per microsecond.

The maximum output level prior to clipping is 31dBu. With an output level of +26dBu (which is a healthy level by anybody's standards), the total harmonic distortion when driving a 100KΩ load is an impressively low 0.0008 percent. The input impedance, at 5.5kΩ, is chosen to match well with a wide variety of dynamic, ribbon and capacitor microphones, while the instrument input is set at 2MΩ, so it will load guitar pickups even less than most guitar amplifiers.

My tests on the P-Solo included a session recording spoken word, as the very exposed nature of the solo voice would show up any flaws in the preamplifier and microphone. At the kind of gain settings needed to record a fairly quietly spoken female voice, the noise floor from the P-Solo was impressively low, and such noise as could be heard by cranking up the monitoring levels turned out to be mainly due to the choice of microphone, not the preamp. Subjectively the sound came over as crisp and well focused, but with plenty of genuine — as opposed to synthetic — warmth at the low end. Some people worry that an accurate preamplifier might sound sterile, or uninteresting. However, there's such a big choice of 'character' microphones and sound-shaping plug-ins that there's now really very little need to add further coloration at the preamp stage.

One benefit of using a clean and accurate preamplifier like this is that vocals seem to sit much more solidly in a mix and retain their clarity rather better than those recorded using an indifferent preamp. In the small studio, where the same preamp might be used for recording voices, miking instruments and DI'ing instruments, the difference in subjective quality when you get to the final mix can be very significant. Furthermore, the same type of coloration is unlikely to suit all voices and instruments, so where you can only afford one really good mic preamp, it makes more sense to buy one that doesn't impose its own character on the sound.

I really enjoyed working with this preamp, and it certainly delivered on its promise of clarity. It's not exactly cheap, but it is still very attractively priced for such a well-engineered unit and would be a sensible choice for the project studio owner who needs one general-purpose preamplifier to handle a wide range of vocal and instrument recording. Having such a clean instrument DI feed is also useful where software modelling solutions are used to shape guitar and bass sounds. In all, the P-Solo offers a very favourable balance between price and performance and is built to provide many years of useful service.

While there are a number of multi-function channel strips in this price range, and some comparable dual-channel mic preamps, like DAV Electronics' Broadhurst Gardens Number 1, there are fewer dedicated single-channel mic preamps. If you're considering the P-Solo you might want to look at units such as the Grace Audio Model 101 or SPL Gainstation.

If you need a no-frills mic/instrument preamplifier that really delivers on quality for a sensible price, the P-Solo is definitely worth a closer look.