The latest of many hardware emulations from Universal Audio reproduces a complete API channel strip in your DAW.

Universal Audio’s latest version 7.3 software update for the UAD2 platform includes tweaks to ensure full compatibility with Cubase 7, Nuendo 6 and Logic Pro X. Furthermore, the ’m’ plug-in format has been revived to allow DSP savings when processing in mono for DAWs such as Ableton Live that only instantiate stereo plug-ins. UA discontinued ‘m’ plug-ins a while back but customer pressure has seen them restored to their former glory. 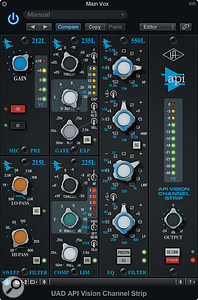 More excitingly, however, version 7.3 also sees the addition of a major new plug-in. The API Vision Channel Strip is modelled after that company’s Vision analogue console, first manufactured around a decade ago and itself inspired by the company’s earlier designs. API consoles have a distinctive ‘sound’ which UA feel makes this one of their more sonically colourful emulations. The plug-in requires UAD2 DSP hardware or an Apollo interface to run.

The Vision channel plug-in window comprises five separate processing modules, plus an output/metering block encompassing both dynamics and equalisation as well as the 212L preamp stage. Of course the preamp that you’ll actually be using is the one in your audio interface (or the one plugged into it), but providing that it is of good quality and reasonably neutral, this plug-in will give you the sonic signature of the 212L preamp circuit, including its custom-made 2520 API op-amp and transformers, most noticeably their saturation behaviour when pushed hard. Its gain control has a range of 30 to 65 dB so as to allow the user to dial in more ‘saturation’ where needed. As with the original it also has a 20dB pad switch, polarity invert (phase) and an LED level meter.

The Vision’s 550L EQ section is equivalent to the classic API 550B equaliser. This four-band design uses switchable frequency and gain controls arranged as dual concentric knobs, and the upper and lower sections can be switched between shelving and bell operation. The bell filters are not true parametric bands as they have no bandwidth control; instead, they have ‘proportional Q’ characteristics, meaning the bandwidth narrows at higher settings but remains broad when the EQ is used more gently. The EQ section can be placed pre- or post-dynamics, and a bypass control removes the whole EQ section from the audio path.

API’s 215L sweepable high- (500Hz to 20kHz, 6dB per octave) and low-cut (20Hz to 600Hz, 12dB per octave) filters occupy a separate section below the preamp. A button allows the filters to be removed from the main audio path and applied to the dynamics side-chain signal path for frequency-selective compression tasks, and below that, there’s a bypass button for the whole module.

Dynamic control comes from a recreation of the 225L Compressor/Limiter section, which offers the choice between feed-forward (‘New’) and feedback (‘Old’) circuits in the detector signal. All the familiar compressor controls are joined by a hard/soft knee switch and a bypass switch, though in this design the Attack setting just offers switched Slow, Medium and Fast options rather than being fully variable. Release time is fully variable from 50 to 300 ms. An LED-style gain-reduction meter shows how much compression is being applied, and there’s the expected bypass switch.

Directly above the compressor is the 235L Gate/Expander section. The original analogue circuitry has a reputation for being extremely fast-acting at its fastest attack setting, again selected from a choice of three. In addition to the expected threshold, attack and release controls, the module can also operate as an expander, and there’s an attenuation depth control that is variable from 0 to 80 dB. The section also includes a Release/Hold mode selector switch and a bypass switch. When in gate mode, switching to Hold converts the slow release envelope into an abrupt shutdown at the end of the hold time period as set using the lower knob, for those ’80s gated drum sounds. A five-segment LED meter shows the expander/gate attenuation.

Global control provides the option to unlink the left and right side-chain signals for dual-mono operation, and there’s also adjustable output gain and an 11-segment LED meter. All DSP processing can be bypassed using a single button.

To get you started, UA have included a large library of channel presets contributed by Joe Chiccarelli, Neil Dorfsman, David Isaac, Nathaniel Kunkel and John Paterno. When using presets you’ll still need to adjust the gate and compressor thresholds to suit the recorded level of the material, but they are nevertheless a great introduction to getting the best out of this plug-in; the right combination of preamp drive and compression deliver up some great rock drum sounds as well as punchy bass guitar.

If you’d rather roll your own settings, all the sections have fairly conventional controls and metering, so operation feels very familiar. While there are some great vocal sounds to be had, the ability to push the virtual preamp makes it particularly effective in adding a bit of weight and attitude to things like drums, bass guitar and bass synth. At lower gain settings it seems fairly benign, but as you push it the sound warms up in a subtle way. Push it some more and the distortion becomes more ‘growly’, and when you go all out, the sound sharpens up as the analogue electronics (or model thereof) start to clip.

I found the EQ section to sound pretty natural if used in its lower to mid gain range, but as the proportional Q circuitry makes the filters narrower at higher cut or boost settings, large amounts of boost can start to sound noticeably assertive. Conversely, large amounts of cut can be very effective, as the human hearing system is far more forgiving of narrow-bandwidth EQ cut than it is of narrow boosts. If you need to add that elusive sense of air to a mix, switching the upper band to shelving does the trick nicely.

The two alternative compressor characters only really reveal themselves at higher gain-reduction settings, where the Old mode lets you explore vintage gain pumping. The feedback topography used in this mode actually allows for the dynamic range to be reversed slightly, so that sounds with a loud attack can be pushed right down only to swell in level as the sound starts to decay. Keith Moon cymbals anyone? New mode behaves a little more consistently and has more of a focus for those occasions that need something less unruly.

Whether you want warm and subtle or punchy and attacking, this plug-in covers all the ground needed for a wide range of musical genres, so even if you have good EQs and compressors already at your disposal, I think you’ll be surprised at just how well the combination of these particular API elements works. Just make sure you adjust the output control to match the bypassed and processed signal levels, otherwise it is all too easy to fool yourself into thinking the loudest option is always the best-sounding. As always, UAD owners can check out the free two-week demo to see if they like it.

UA have come up with a very convincing-sounding emulation of the API Vision console, capable of imparting a classic sound quality to just about any genre of music.