As the title suggests, the musical target of Chillers Joint is downtempo soul, funk, hip-hop, trip-hop and related styles. This collection of 20 construction kits, comprises over 1100 loops, which account for 1.5GB of data, and uses Ueberschall's Elastik front-end, which Mike Senior described when reviewing the company's Groove Shadow library (SOS February 2008). Elastik comes as a VST, AU and RTAS plug-in, and provides a compact set of tempo- and pitch-matching tools, as well as a simple filter. 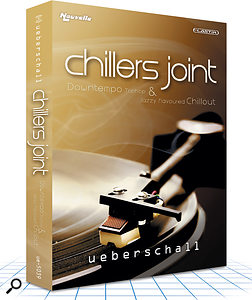 In each construction kit, the loops are split into four groups: drums, instruments, backings and mixes. The drums section contains multiple loops, both of complete drum mixes and individual layers, the latter offering both drums and percussion sounds. Sonically, the drums seem spot-on for the target music styles, with the kicks having plenty of thump, and a nice combination of very dry and very wet snares. The instrument sections generally include two or three bass loops, plus a selection of other synth-based sounds. The basses also pack a punch in the lower frequencies, while the synth material spans a broad spectrum, covering simple textures, rhythmic beds, filtered sounds and sound FX. The other two groups give you mixes based on the drum and instrument loops: 'backings' are simply mixes without any drums, whereas the 'mixes' provide various combinations of the loops pre-mixed and including the drums — and both are useful when auditioning each construction kit, giving you a feel for what's possible. Of course, this means that the headline loop-count is less impressive than it might seem.

As you'd expect from the title, the original recording tempos are in or around the 90bpm territory. The style of the musical content is also suitably chilled, although there's a range of moods. For example, the 'Chinchilla' construction kit would not sound out of place as a mellow Zero-7 track, and 'Train Of Thought' is equally cool, with its fretless bass, while 'Desert Storm' offers something rather darker. In contrast, kits such as 'Off The Hook' and 'Flashback' reminded me of Madonna, circa her Erotica album. Moods aside, there's a nice consistency of sound across the different construction kits, and loops can easily be mixed and matched for further variety.

If you're only interested in one or two Elastik titles, the thought of having to learn a new interface (albeit a fairly simple one) might be a bit of a deterrent, but Elastik can just as easily be used as an auditioning tool before exporting the loops to WAVs. (A drag 'n' drop function from Elastik to an audio track in your host DAW would be a nice touch, though.) Judged purely on the quality of its musical content, Chillers Joint has a lot going for it. John Walden