We have looked at a number of Ueberschall Instrument Series libraries in SOS, and they always provide interesting collections of melodic phrases, often from slightly left-of-centre instruments. The latest release in the series is Twelve String Electric and, while the title perhaps doesn’t give too much away in terms of the likely musical content, in most people’s minds, the instrument conjures the sound of late-’60s pop like almost no other. 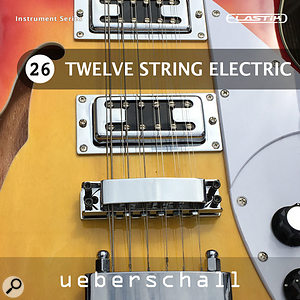 The organisation of the material is designed very much with ease-of-use in mind. In total, the library delivers nearly 5GB of samples and contains around 700 individual loops. These are, in turn, split into three tempo groups with original tempos of 80, 100 and 120 bpm (although Elastik has always done a very good job of pitch- and tempo-shifting if you need to fine-tune for a specific project).

Within each tempo group, as well as both dry and processed versions (the latter generally using some tasteful reverb), the loops are organised into phrase-based folders and it’s here that the producer-friendly organisation comes across. Each of these folders is built around a pair of related chord sequences and an ‘outro’ but, for each chord sequence, you are also provided with two different guitar performances. A mono recording contains the ‘main’ part while the second is a complimentary stereo part (supplied as mono L/R loops and a stereo loop). You can, therefore, use these individually or in combination to add variety.

Used together, and with the stereo version using the full stereo width, the sound is very impressive. This is, of course, helped by the fact that the recording and sampling quality is up to Ueberschall’s usual high standard. And, given that the sound is very consistent across all the phrase folders (I suspect all the material was played on the same guitar, in the same studio and by the same player), then building complete song structures is very easy indeed.

The ’60s vibe — full of jangling 12-string character — most certainly comes across in some of the performance folders so, for jobbing composers needing that instrumental sound for a cue or three, they can get there pretty quickly. However, there are also folders where the material introduces light jazzy elements and funk, while a number of the performances would also happily slot into a contemporary pop context. Like any loop-based library, you have to work within the confines of the supplied phrases and, at €99, perhaps the library is aimed more at the working composer/producer than the interested casual purchaser. That said, if playing a 12-string electric guitar is not on your personal skills list, Twelve String Electric is most certainly well worth a strum.