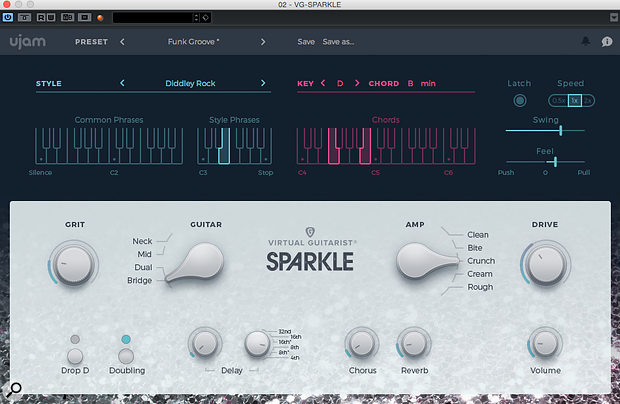 Sparkle delivers some cleaner tones from your virtual guitarist.

Back in the May 2016 issue of SOS, I reviewed UJAM’s Iron virtual instrument. Created by many of the Wizoo team that developed the original Virtual Guitarist for Steinberg, Iron was a re-launching of the VG concept, brought right up to date with the underlying sample engine rebuilt from the ground up.

Iron focused on the heavier side of the guitar and covered a range of rock-oriented styles but, as UJAM promised, Iron was to be just the first of a series of VG releases and two further options have now been added to the roster; Sparkle and Amber. In contrast to Iron’s more humbucker-based sounds, Sparkle is based around a single-coil type guitar and is less obviously ‘rawk’ in terms of the styles covered. Amber provides a steel-strung acoustic guitar with over 50 styles that span basic pop and rock, range through funk, folk and country, dip into reggae and ska and end up in some more experimental and alternative time-signatures (not everyone wants to play in 4/4).

I was impressed with Iron. While the guitar is my main instrument, I can easily see the attraction of this type of ‘ready made’ virtual session player. So, if you are interested in the format, but perhaps want your virtual guitarist to do something other than Iron’s more rock-flavoured approach, are Sparkle and Amber worth auditioning for your virtual band?

All The Right Tools

In terms of basic operation, both Sparkle and Amber offer the same key tools I outlined in the Iron review and, as can be seen from the screenshots, the interfaces are very similar. Rather than cover all that detail again, therefore, I’ll let those interested hop over to the original Iron review and, after the briefest of recaps, I’ll focus here on the distinctive features of these two new additions to the VG lineup.

As with Iron, both Sparkle and Amber feature some rather clever sample manipulation that allows the collection of stock phrases — the vast majority of which are strumming-based — to be triggered via MIDI and rendered in a range of chord types and at any tempo. The available chord types include major, minor, sus2, sus4, diminished, augmented fifth, maj sixth, min seventh and maj seventh and, while not sophisticated enough for some jazz/prog duties, these ought to be more than enough for pop, rock and most other contemporary styles.

Sparkle ships with over 90 core styles while Amber has just over 50. As before, within each style, you get access to 24 ‘common phrases’ (the same in each style) plus 12 ‘style phrases’ (performance phrases particular to that style), so there is plenty of performance variety available. For each style, there are intro, build-up and stop-type performances included, as well as phrases that span a range of intensities from sustained chords to busier strumming.

Other common features include options for Latch, Swing and Feel (so you can add a little extra groove), the addictive Doubling option (for an emulated double-tracking effect) and rather nice delay, chorus and reverb effects. Your pitch wheel will work, but more useful is the mod wheel that, as with Iron, allows you to apply variable palm muting to the performances. If you also have access to a MIDI footpedal that can deliver CC data to the Expression parameter (MIDI CC11), you can also add useful volume variation to the phrases. Both of these are really effective and go a long way to adding a ‘human’ touch to the resulting performances. 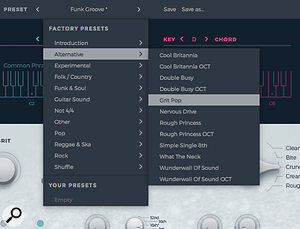 Sparkle’s presets and the associated styles cover a broad range of musical genres.Sparkle’s interface (see above) offers a Grit control, and this allows you to dial in a little high-mid overdrive to your sound. By default, this is linked to aftertouch so, if your MIDI keyboard supports it, you can apply this tonal variation as a form of performance expression. As with Iron, you also get dials to select a pickup choice and amp style (from clean to rough) and a Drive knob that allows you to push the chosen amp model a little harder. As with Iron, the Drop D button actually down-tunes the whole guitar by two steps.

Obviously, the most important difference between Sparkle and Iron is the samples upon which they are built. Sparkle delivers a Stratocaster/Telecaster-orientated sound and, while you can most certainly coax some very nice warm tones from it, it will also do twang if that’s your thang. The other obvious sonic difference is that, even with the Rough amp selection, and the Drive turned to 11, Sparkle stays fairly polite. If you do want a little more edge, you can always keep Sparkle’s own settings fairly clean and add your own guitar amp sim of choice as an insert effect in your DAW/sequencer. I tried this with Cubase’s own amp sim plug-in, BIAS FX and Guitar Rig and was suitably impressed with the results.

Of course, those cleaner, chime-like, tones might be exactly why Sparkle appeals to you in the first place and, if so, then the instrument will not disappoint; Sparkle can do a nice warm, ever-so-slightly crunchy, tone right through to a very clear, bright bite. As suits the range of tones, the 90+ styles are perhaps less obviously raucous than those found in Iron. Yes, they do cross over into rock but, in the main, they occupy more mainstream pop, folk, funk, country, soul and shuffle grooves. The bulk of the styles are based on chordal playing, but there are also a number of styles that provide octaves (essentially root-note pairs for whatever chord is playing) and even a couple of useful single-note styles for when something less harmonically complex is required. Pretty much without exception, all the styles have something useful to offer.

Given that the original Wizoo/Steinberg VG offered both acoustic and electric options, it is great to see UJAM now offering a steel-strung acoustic option in Amber. 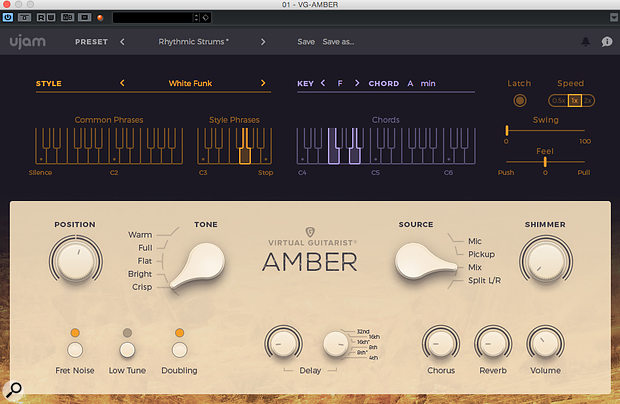 In terms of the control set, the variations here are in the Position knob, which simulates the position of the strumming hand relative to the neck/bridge and therefore changes the tone, while the Shimmer knob adds a little high-end sparkle. You also get to dial in the Tone control from warm to crisp and to select between a microphone, pickup or mix in terms of the sound source from the guitar. The combination of these various controls does mean you can go from big and boomy through to very thin, high-end, ‘ching’ and, while the extremes are perhaps reserved for special occasions, there is plenty of very usable ground in between. You could, of course, also use your DAW/sequencer’s own EQ to dial in the tone you require just as you might with a ‘real’ acoustic guitar recording.

Like many of the other acoustic guitar-based virtual instruments (see the 'Alternatives' box), Amber does make it ridiculously easy to get a classy-sounding acoustic guitar coming out of your monitors. There are somewhat fewer preset styles included here but, given that a strummed acoustic perhaps performs a more generic role in pop, rock, funk, country, reggae and related styles, it is still pretty easy to find something to suit the most musical moods. 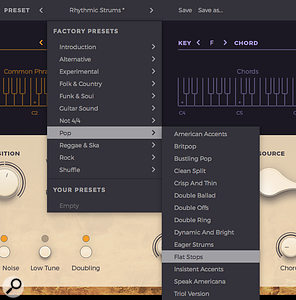 As with Sparkle, Amber’s presets and styles cover plenty of ground.In use, I had no technical issues with either Sparkle or Amber when used in Cubase (my usual host of choice) and the quality of the guitar tones is really very good indeed. I’ll qualify my next comment in a minute but, as with Iron, these are perhaps instruments that are best suited to a supporting role within a production rather than being isolated or used as a very obvious ‘featured’ instrument. This is not because the sound isn’t very believable (it is) but simply that it is very ‘produced’ straight out the box and the performances are always right on the money in terms of timing.

And that qualification? If anything, to get the best from all these VG products, you have to master those performance expression options. Using an Expression pedal to add volume dynamics to the parts and the mod wheel to get creative with the palm muting is pretty much essential. Without these humanising elements, the performances can become just a little too polished and consistent to be believable. Unlike a real guitar player, neither Sparkle nor Amber are going to play any duff notes, but you do need to do a little work (and just a little) if you want the parts to breath and get close to the dynamics of the real thing. That comment aside, it is scarily easy to create polished guitar tracks with both of these virtual instruments.

Like Iron, both Sparkle and Amber do a rather good turn as virtual session guitarists. The new VG line is expanding rather nicely and it is easy to suggest possibilities that UJAM might have on their horizon for further releases. VG Bass would be top of my personal wish-list but VG Ukulele could also be a lot of fun.

I’m not sure any top-notch session players are going to feel too threatened by the VG series, but for media composers or solo music producers looking for a speedy way to a fully polished strummed guitar part or three, both Sparkle and Amber are capable of delivering the goods. And, given that particular target audience, I think they are also very reasonably priced.

Top of the ‘playable’ virtual guitarist tree would be products such as the RealGuitar series, Acou6tics and Electi6ity. All of these products are more flexible in terms of the performances you can coax from them than UJAM’s VG series but, equally, all come with a steeper learning curve, more effort required by the user and a higher price. For Amber, a more obvious comparison is Native Instruments’ Strummed Acoustic, which also delivers creditable results with a minimum of effort.

Both Sparkle and Amber are excellent additions to the new VG line. Neither will perhaps replace the character of a well-played guitar performance but, if they suit your stylistic needs, they deliver a polished and professional result with a minimum of fuss.