Subtitled ‘essential tuned percussion’, this Kontakt-hosted collection of instruments offers Marimba, Xylophone, Glockenspiel, Tubular Bells, Glass Marimba, Song Bells, Vibraphone and Crotales. All eight instruments and their parameters are available in one simple GUI, this being much larger (in particular wider) than was possible in Kontakt libraries so far. Kontakt 5.6.5 is able to display super-sized GUIs such as this one, so that version is the minimum requirement to run Mallets. 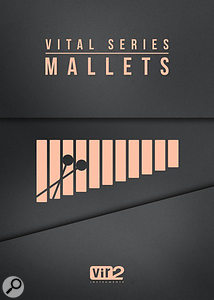 The samples’ recorded quality is excellent; all instruments are recorded dry and in stereo, with up to four velocity layers and five round robins. There are six different mallet types: Soft, Medium Soft, Medium Hard, Hard, Rods and Bow, the options dependent on the instrument in question. All have between two and four types except the Tubular Bells, which provides only one: hard. Each instrument occupies its own ‘box’ on the GUI, each with an identical set of parameters: on/off, mute/solo, mallet type, volume, pan, stereo width, octave, extended range on/off and an ADSR envelope. The octave parameter is counter-intuitive; rather than transposing in octaves, it shifts an instrument’s position on the keyboard by up to +/- two octaves; so a setting of +1, for example, will cause an instrument to sound one octave lower relative to another set at zero — the opposite of what you’d normally expect.

Vir2 intend Mallets to be a creative sound design tool as much as a compendium of tuned percussion, so it’s somewhat curious that instruments can’t be shifted in semitones, or even detuned against each other; a missed opportunity, as these types of instrument sound great when layered at different intervals. Since all under-the-hood editing functions are ‘locked out’, there’s no DIY option available to make such changes for yourself. Another oddity is the non-functioning sustain pedal — instruments always ring out according to their envelope’s release time, making the Vibraphone in particular a potentially messy affair as you can’t damp unwanted ringing notes as you would on the real thing. Nevertheless, there’s plenty of sonic mileage here layering different instrument combinations, mallet types, octave offsets and ASDR settings.

Further processing includes Kontakt’s built-in EQ, distortion, delay, reverb, transient and compressor effects. There is also a ‘rolls’ generator with speed and humanise controls, using the modwheel to control the rolls’ dynamics. Sensibly assuming your virtual malletist only has two hands, rolls only apply to two notes or a single note. In addition, a filter with cutoff and resonance controls, plus four independent tempo-sync’able LFOs for volume, pan, low-pass filter and pitch modulation, can be applied globally to the whole sound combo. It would have been nice to have each instrument individually routable via the filter and LFOs allowing, for example, modulated vibraphone layered with non-modulated crotales, eliminating the need to run two instances of Mallets.

In conclusion, Mallets combines good-quality samples, simplicity and sonic versatility that, even if you have this genre of instruments covered elsewhere, offers potential for sonic inspiration in one convenient place.