The sound of orchestral percussion as a backdrop while bad guys get chased, gigantic robots fight and time runs out has become something of a cinematic cliché. There is a reason for that — it works. There are a number of really good sample libraries that can supply the necessary level of sonic excitement, but a relatively new (and modestly priced) option on this front is Vir2’s Cinematic Thunder: Epic Orchestral Toms. 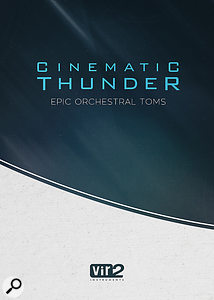 Well, I say new but, in fact, v1.5 represents a significant update on the original Cinematic Thunder released some four years ago. This revision comes with a substantial overhaul of the sample base, new samples added (the library now spans around 5GB), a brand-new Kontakt UI (the library requires the full version of Kontakt) and a pattern-sequencing option added. Of course, the heart of the library is still those multi-sampled (up to 14 velocity layers and three round robins) orchestral toms, with 18-, 16-, 12- and 10-inch drums sampled and new Surdo samples added for this version.

Four master patches — Sticks, Mallets, Group Hits and Group Big Hits — are included, each bringing a somewhat different sound. Within the Sticks and Mallets patches, the samples are mapped across the keyboard based upon drum size, with two keys for easy manual playing. However, you also get extra keys for two-, three- and five-stick hits and a ‘roll’ key that responds to the Mod Wheel to build crescendos. The two Group Hits patches are somewhat simpler and map various pairs of toms to single keys across the keyboard.

The main page of the new (and rather nifty) UI allows you to mix and match between three different microphone placements (from dry to ambient) or to use a ‘processed’ option (a pre-configured mix of the three main mics plus some added ambience). However, do be reassured that these sounds can get impressively big if you want them to and the multiple velocity layers make for a very expressive playing experience. The option to add a little pitch and velocity randomisation also helps here.

The Effect screen offers a convolution reverb, delay, limiter, EQ, distortion, stereo widener and compression. However, the Transient Master is really worth exploring as it can dramatically alter the character of the hits to suit your needs. The final page — the new Sequencer — allows you to program a single sequence of up to 32 steps and with variable note divisions to sync to your project’s tempo. This is a doddle to use and you can create some great pattern effects. It is, however, a bit of a shame that there aren’t additional options for pattern saving or for key-switching between multiple patterns.

That minor comment aside, as a source of very playable — and suitably thunderous — orchestral toms, Cinematic Thunder provides plenty of bang for a relatively modest buck. Well worth auditioning alongside some of the obvious competition.