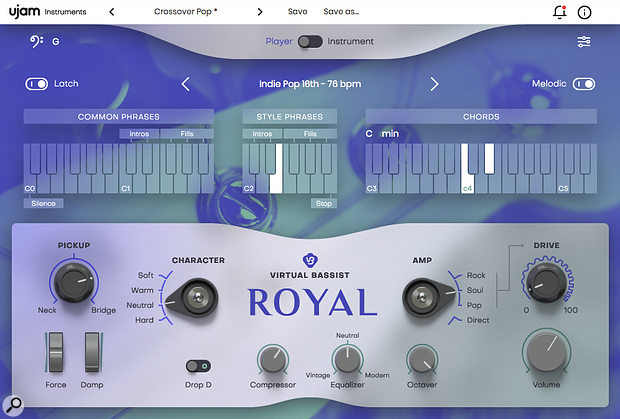 In 2016, UJAM revived Steinberg's Virtual Guitarist concept when they launched Virtual Guitarist Iron (see SOS May 2016 issue for a review). With Iron designed to rock, they subsequently broadened the style palette with Sparkle (clean electric), Amber (steel-strung acoustic) and Silk (nylon-strung acoustic) and have also added a range of style-based virtual drummers. However, the latest release — and the subject of this review — is a trio of virtual bassists: Royal, Mellow and Rowdy. These provide classy electric, organic upright acoustic and overdriven rock virtual performers. So, if you are looking for a bass player — albeit a virtual one — to lay down a solid foundation to your own productions, are UJAM's trio going to pass the audition?

The underlying concept for Royal, Mellow and Rowdy is identical to that of UJAM's virtual guitarists. You can select from a large number of musical styles, each of which contains a selection of 'core' (simple bass line patterns that are the same for each musical style) and style-specific (less generic and with more musical flavour) options. You can change patterns via a set of MIDI keyswitches spanning C0 to B2.

The note range C3 to E5 allows you to trigger chords and the VB engine will then play the selected style pattern based upon the chord selection. A very respectable range of 15 chord types are supported and, while you can trigger chords by playing the full set of notes, many of the simpler voicings can also be triggered via one or two keys.

So far, so VG, but compared to the VG concept all three VBs bring a couple of interesting — and very welcome — additional performance features. The above mode, where VB plays phrases that follow chord changes, is termed Player mode. However, you also get Instrument mode and this gives you the same range of bass sounds but in a more conventional virtual instrument. This is an excellent addition, and Instrument mode means you can simply play your own bass lines from scratch or add a few additional notes to a Player mode performance for a bit of extra character.

In addition, Player mode itself can be switched between two behaviours. With the Melodic switch off, the performance patterns stick to just notes from within the current chord. However, with the Melodic switch on, notes are added from outside the chord to create more musical interest. And, providing you set the overall key for VB to match your project (via the bass clef icon, located top-left), the engine ensures that those non-chordal notes do actually remain in key.

The addition of Instrument mode transforms VB into a fully playable virtual instrument.

A further very useful new feature in Player mode is the addition of intro and fill options within the core and style-specific patterns. Usefully, when triggered, these patterns only play once before the VB engine then takes you back to the previously selected main pattern. This makes it super-easy to drop these little bits of musical ornamentation into your overall bass line. You also get options for adding variable swing, adjusting the push/pull feel and opting for tighter or looser timing.

The bottom half of the UI lets you customise the bass sound, and many of these controls are similar in all three instruments, including a small selection of amp/mic and 'character' choices, simple compression and EQ, an effective +1 octaver that adds a little more mid-range edge if required, volume, and a drop–D option. All three instruments make use of the pitch and mod–wheel controls to adjust Force (which varies the playing dynamics) and Damp (which controls the degree of note damping/muting).

There are also a few differences. For example, Royal and Rowdy offer Drive controls while Mellow provides a Room effect that's more suitable given its acoustic nature. Rowdy also has a Fuzz control instead of Neck/Bridge pickup/fingering position options.

VB Royal (shown above) is described as a 'session pro' and, sonically, what you are getting is the sound of a classic electric bass recorded in a pristine studio environment. In use, the sound is very full and suitably solid and there is a lot of bottom end there if you want it (indeed, I found myself rolling some of the very low end off for busier playing to clean things up a bit). As a bread–and–butter electric bass, it is right on the money and ought to suit a very wide range of musical styles and contexts.

In all, there are over 40 musical styles and 450 phrases included within Royal's repertoire (the other two players feature similar numbers). Yes, I guess a real session bassist might have more than 450 licks to offer, but with the fills and intros, and the Instrument options where you can add some manual playing, it really is possible to coax a lot of performance variety out of Royal. The preset styles span Ballads, Funk/Soul, Hip–Hop/R&B, Indie, Latin, Pop, Reggae/Ska and Rock. No, there is nothing too leftfield here but, without exception, the styles are very useable. Providing something fits your musical mood, VB Royal can deliver a super-solid bass part that will fit into almost any mix.

UJAM suggest Mellow is a 'virtual double–bass–playing jazzy acoustic hipster' and, while I've yet to see those words used in an actual bassist audition listing, it does capture the essence of what this VB is aimed at. It also implies what it's not, which is a full-on jazz double bassist. Yes, there is a selection of jazz performance presets — and very good they are too, with a genuine jazz flavour — but Mellow is not going to replace a virtuoso jazz player. Alongside jazz, however, Mellow does cover Blues/Rock, Country, Funk/Soul, Hip–Hop, Latin, Pop, Soul and Alternative style groups. Perhaps Mellow is best thought of as an acoustic bass player who is a very accomplished jack-of-all-trades rather than a master of one? 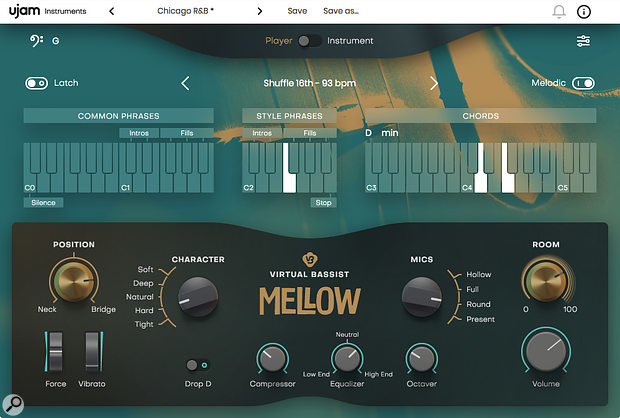 In terms of sound, Mellow is very convincing. Again, there is plenty of bottom end if you want it but, equally, you can also get plenty of clear low-mid/mid articulation out of the instrument if that's what your mix requires.

It's also pretty impressive as a playable instrument in Instrument mode, with performance articulations such as legato, slides and dead notes that make some very credible performances possible. No, you don't get the finesse or tiny details that a real double bass player can bring, but Mellow is double bass done easy and, if a solid performance and a simple life are what you are after, it can get the job done.

If your bassist needs are, in UJAM's words, for "loud–mouthed and rebellious", but without the reality of the stroppy behaviour that might accompany it, then Rowdy might be your choice. The key differences with Royal are that more overdrive is available and the selection of style presets are more rock oriented. In sonic terms, it can certainly be aggressive but, like a seasoned professional player, Rowdy never loses the plot, and will deliver something that can serve a song. Perhaps 'rowdy with performance restraint' is a good summary? 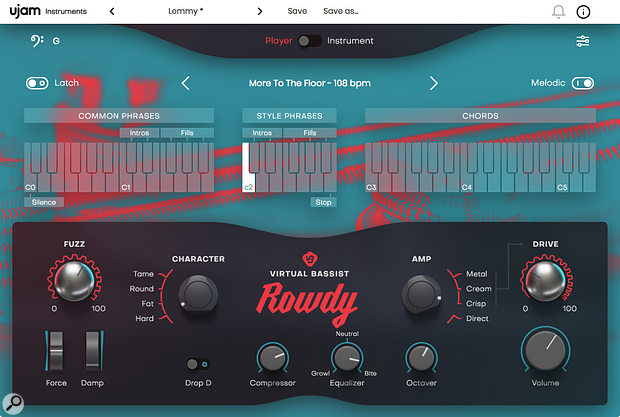 Style-wise, the presets are organised into Classic Rock, Hard & Heavy, Millenium Rock and three '70s, '80s and '90s categories. This actually spans quite a lot of musical territory and, as with the other two titles, a number of the presets hint at their inspiration — Live & Dangerous, Holy House, Nirvana's Bass, etc — while there is even a Lemmy preset in honour of the rowdiest bass player of them all.

When deadlines are short, or ideas are in danger of escaping, UJAM's VBs might get you a complete, super-solid performance in less time than it takes to record the real thing.

So, the UI is easy to use, the bass sounds themselves are really good and the range of performance patterns each virtual player offers, while not limitless, provides enough choice to keep things fresh. What about within an actual project/mix or three? Given that UJAM also offer virtual guitarists, that seemed like a good place to start. For example, with Rowdy, an obvious companion is the rock-orientated VG Iron and, having programmed a suitable chord sequence, I had quite a lot of fun sitting the various style presets and patterns alongside each other to see what worked. Other UJAM combinations worked just as well and I have to say I was impressed. Indeed, it was rather too easy to create a very creditable backing track and, with a virtual drummer added (I used Superior Drummer 3 but UJAM have offerings in that department also), my completely virtual band of session musicians just needing pointing in the right direction. Add in some 'human' with a few guitar overdubs and some vocals, and a song idea can be fleshed out very quickly. What's more, the virtual band sound very polished indeed.

That's not to say there are not things you have to watch out for. In general, I would say all three VBs are best suited to more mainstream pop/rock or singer/songwriter musical styles rather than more specialised, niche genres. In addition, Working with the VB performances — each of which is a one- or two–bar performance pattern — has similarities to working with audio loops; some effort is required to make sure those pre-formed performances fit the groove within the rest of your project. However, compared to loops, UJAM's session players have the advantage of instantly adjusting the notes used within each pattern to the required chord/key. In addition, tweaking the push/pull and swing is easily done by ear and you can also ride the playing dynamics using the appropriate controls. Oh, and the Instrument mode means that, even if you can't find a preset performance pattern to match every section of your song, you can always play something appropriate by hand. That said, it would be interesting to know if UJAM might consider providing style expansion packs for each product to expand each virtual player's repertoire further.

Perhaps the only other comment I would make is that, unlike a Stanley Clarke, Pino Palladino, Flea or a Billy Sheehan, Royal, Mellow or Rowdy are unlikely to create that moment of absolute bass magic — the 'featured' bass riff — that suddenly becomes the hook of the song. These virtual bassists will turn up, play something polished and mix-ready that serves the song, and then get out of your way. In most circumstances, that will be exactly what a solo songwriter, music producer or media composer will need, so it's not a criticism, more an observation to be aware of.

That said, at €$129 each (and a bundle price for all three), I think UJAM are providing excellent value for money and, when deadlines are short, or ideas are in danger of escaping, UJAM's VBs might get you a complete, super-solid performance in less time than it takes to record the real thing. Sensibly, if the concept of a virtual session bassist appeals, UJAM offer a free 30-day trial of all three VB titles via their website. Well worth a look.

While there are lots of very good sample–based bass instruments to choose from, virtual bassists are thin on the ground. Steinberg's original Virtual Bassist is long since a legacy product. However, if you are a mobile musician, one option is the rather wonderful iBassist, an iOS-only app by Luis Martinez. In addition, on the desktop, Toontrack have recently announced EZbass, due for release towards the end of 2019. Given their track record with Superior Drummer and, in this context, the excellent EZKeys, when it becomes available, EZBass is likely to be an obvious competitor to UJAM's offerings.

UJAM have done a great job with Royal, Mellow and Rowdy in reviving the virtual bassist concept. All three ought to appeal to solo songwriters/music producers or busy media composers.