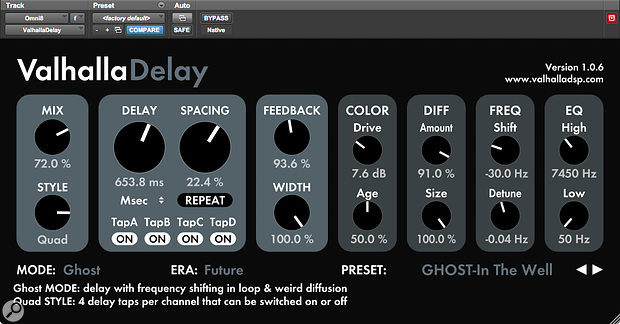 With seven different flavours of echo on tap, this is one seriously versatile delay plug-in.

Over the last few years, Sean Costello has quietly built up an enviable reputation for his Valhalla DSP range of plug-ins. In products such as Valhalla Plate, Room and VintageVerb, he's managed to capture what people love about the sound of different vintage reverbs, without slavishly emulating the look or functionality of any specific hardware unit. Valhalla DSP plug-ins thus boast refreshingly clean and friendly interfaces that are free from ersatz VU meters and brushed metal; and they sound like the real deal if used within the original parameters, but will cheerfully go beyond them if you like. Oh, and did I mention that they are seriously affordable?

The latest addition to his stable is also, probably, the most ambitious to date. Valhalla Delay doesn't just mimic one particular type of classic delay unit: it has no fewer than seven different modes, including some that have no counterpart in the vintage world. Like all Sean's plug-ins, it's available in all the common native formats on Mac OS and Windows, and is authorised using a simple key file.

The first four delay styles on offer are loosely inspired by vintage hardware, though they certainly aren't attempting to recreate particular devices. Tape produces the kind of effects you'd associate with units like the Roland Space Echo or Maestro Echoplex; HiFi is also a tape-style delay, but with the full-bandwidth sound you'd get from using a studio quarter-inch machine in this role. BBD, naturally, replicates the dirty sound of a bucket-brigade chip in action, while Digital seeks to capture the slightly crunchy flavour of old-school digital delay lines.

Two further algorithms called Pitch and RevPitch introduce lo-fi pitch-shifting into the delay path, with the latter adding a granular reverse algorithm for 'backwards' delay. Finally, there's Ghost, an intriguing algorithm that employs frequency-shifting rather than pitch-shifting to achieve interesting and sometimes clangorous effects. In all modes, an additional Diffusion section allows you to soften the repeats and even generate full-on reverb at extreme settings, while there are two dials that adjust parameters specific to a given mode. In the Tape algorithm, for example, these are labelled Wow and Flutter, while in Pitch mode they become Shift and Detune controls. As well as the obvious Width and Feedback controls, Age and Drive dials are available in all modes, and allow you to colour the tonality of the repeats to your chosen degree, the shade of coloration being chosen by the Era setting's Past, Present and Future options. There are also conventional high and low EQ controls within the feedback loop.

Sensibly, to my mind, Sean hasn't limited the functionality of the delay styles to what would have been available on vintage units, so all modes provide the choice of Single, Dual, Ratio, Ping-Pong and Quad delay algorithms. The Dual, Ratio and Ping-Pong algorithms provide separate left and right delay lines, but in Ratio mode, the delay time of the second line is set as a percentage of the first. As the name suggests, Quad mode features four delay taps, configured using a single delay time setting plus a Spread control. Naturally, delay times can be set in milliseconds or in musical divisions including dotted and triplet notes.

There's no doubt in my mind that Valhalla Delay can do all the classic delay sounds, and extends them in useful ways courtesy of the various stereo and Quad options. It also does things you might not expect.

That sounds like a lot of control, and it is; but it's been very thoughtfully packaged in an interface that makes everything accessible, friendly and intuitive. Even though the different modes have quite different sonic characteristics, the control layout remains the same, so it quickly becomes second nature to tweak the Age or EQ parameters to fine-tune the character of the delay. It's clear that a lot of attention to detail has gone into getting the behaviour of the various algorithms right at extreme settings. Crank up the feedback in Tape mode, for instance, and you get a gorgeously dirty yet controllable slab of recirculating sound that can be manipulated to your heart's content by changing the delay time and other controls. Try the same thing in one of the pitched delay modes and you can create all manner of rocket-taking-off swooshes, seasick wobbles, vinyl slowdowns and so on — but, crucially, it seems to be pretty much impossible to make it sound broken in a bad way!

There's no doubt in my mind that Valhalla Delay can do all the classic delay sounds, and extends them in useful ways courtesy of the various stereo and Quad options. It also does things you might not expect. For one thing, there's the Diffusion section. Introduced subtly, it just softens and blurs the edges of the repeats, helping them to sink into the mix a bit more; turn the Amount control up full and you can get a pretty convincing reverb or, with Size close to zero, a neat flanging sound. The forward and reverse Pitch modes are a fertile source of weird effects and textures, but I think the real star of the show is the Ghost algorithm. Small amounts of Shift and Detune add a distinctive and appealing character to the repeats which helps them stand out without making them noticeably effected. Turn them up further, and you get a fascinating effect whereby the echoes become increasingly enharmonic and metallic as they decay; not something you'd want to use every day, perhaps, but a unique and surprisingly useful sound.

All in all, then, Valhalla Delay is pretty much the complete delay plug-in, being equally capable of both conventional and avant garde delay-based effects. It's a worthy addition to any plug-in folder, even one that's already well-stocked with delay effects — and at the price, it's an absolute bargain. Don't delay!

Valhalla Delay represents a really well thought-out balance of the classic and the modern. From sordid tape and bucket-brigade filth to space-age pitch- and frequency-shifted echoes, it convinces in every role where you'd think of using a delay plug-in, and it is super-affordable into the bargain.