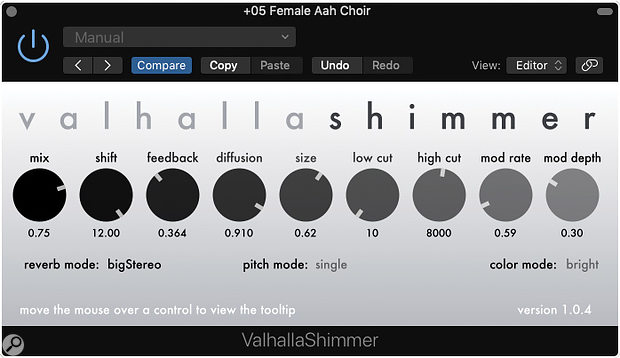 For more instant gratification, you could try a commercial plug‑in such as Valhalla Shimmer!

Creating your own shimmer reverb effects is easy, and gives you plenty of creative control.

One of the staples of ambient music is the so-called shimmer reverb effect, in which each note is followed by a reverberant wash of sound an octave higher than the original. Guitar players often combine this effect with a slow fade-in to the note, which can be achieved using a volume pedal, a little finger wrapped around the guitar's volume knob, or a dedicated slow-attack pedal, such as the EHX Attack Decay that we reviewed in SOS July 2019 (https://sosm.ag/ehx-attack-decay). Numerous reverb pedals now include a shimmer effect, but those that do it well don't come cheap. An inexpensive software option is the excellent Valhalla Shimmer plug‑in. But you can also set up your own variation on the shimmer effect using plug‑ins that most of us already have.

Taking the basic shimmer effect first, this is best set up as a send effect, as this allows you to use different processing to the dry part of the sound, such as a more conventional reverb and/or delay. Some shimmer pedal designs also incorporate a little feedback from the output of the reverb back to the input, and this configuration makes replicating that trickier in most DAWs, but I've found that this step is usually unnecessary anyway.

The two key components of the shimmer effect are octave-up pitch shifting and a suitably long and washy reverb. But it's also helpful to place a compressor before the pitch-shifter — this can help to keep up the level and density of the reverb tail, creating something akin to a pad or string machine sound. To reinforce the pseudo-strings effect, try adding modulation to the shimmer sound using a subtle chorus or ensemble plug‑in. Using a rotary speaker emulation, on the other hand, will give you something more akin to (surprise, surprise!) an organ sound.

As a Logic Pro user, I have my own template for the shimmer effect that uses only Logic's built-in plug‑ins, and you can download a Zip file of that above. But I realise that many of you use other DAWs, so in this article I'll try to suggest third-party plug‑ins that will work well. The best place to start, of course, is with the plug‑ins you already have — not least your own DAW's bundled collection.

By way of insert effects on the main source track, I like to add a little reverb plus some quarter-note tape-style delay, with the top rolled off down to maybe 1.2kHz to make the repeats sit nicely behind the main sound. (Without such delay and/or reverb effects, I find the dry part of the sound can seem rather too separate from the shimmer reverb tail.) Pretty much any basic reverb and a delay plug‑in that also includes variable filters will work for this part of the job. 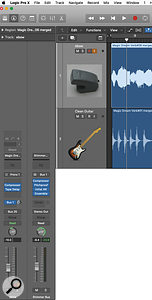 The effects used by Paul for the DIY shimmer effect he describes in the main text.If you're working with a clean, DI'd electric guitar, try putting a compressor at the start of the track's plug‑in chain — this will help even things up, and if the note attack is too 'pingy', reduce the compressor attack time until it is suitably tamed. Add just enough gain reduction (typically 6dB or thereabouts) to soften the note. Either use an auto release or set it to around 200ms for slowly played parts. There's also the option of panning this 'dry' track to one side and the shimmer send bus to the other, which can create a bigger stereo panorama, which is sometimes what you want, and sometimes not.

For the shimmer chain — which, as I said in passing, should be set up as a send effect — you can again start with pretty much any compressor. Of course, the aux send control of your source track controls the level feeding into the compressor, and thus how much signal crosses the compressor threshold, so it's usually best to leave the send at its unity gain position and adjust the amount of added shimmer using the aux bus (effects return) track's level fader. The compressor type and settings aren't critical, but I tend to use a ratio of around 4:1, a fast attack and a release time of about 200 to 400 ms. The threshold is then adjusted to give gain reduction up to about 10dB.

Next up is a pitch-shifter. Most DAWs have one now, but if you don't already have something suitable, the free Pitchproof from https://aegeanmusic.com will do the job nicely. This particular pitch-shifter has the added benefit that it can generate key-related harmonies from a monophonic input, which opens up further possibilities such as having the shimmer tail work as a harmony to the original sound. For the conventional shimmer effect, however, set it to +12 semitones. I also like to run the mix control at between 50- and 70-percent wet, so that some of the original pitch also gets through to the reverb, which comes next. As a rule, the better the quality of the pitch-shifter you use, the smoother the sound. But as the reverb that follows does a lot to hide any rough edges, the pitch-shifting quality doesn't need to be top-notch!

I find an algorithmic reverb set to Hall or 'large' usually gives the best results, and they don't need to be expensive or sophisticated.

I've achieved good sounds with many different reverbs — there are countless options to choose from — but I find an algorithmic reverb set to Hall or 'large' usually gives the best results, and they don't need to be expensive or sophisticated. For this example, I've settled on the Initial Audio AR1, which is very straightforward and usually available at a very substantial discount. Again, you probably already have something that you can try. 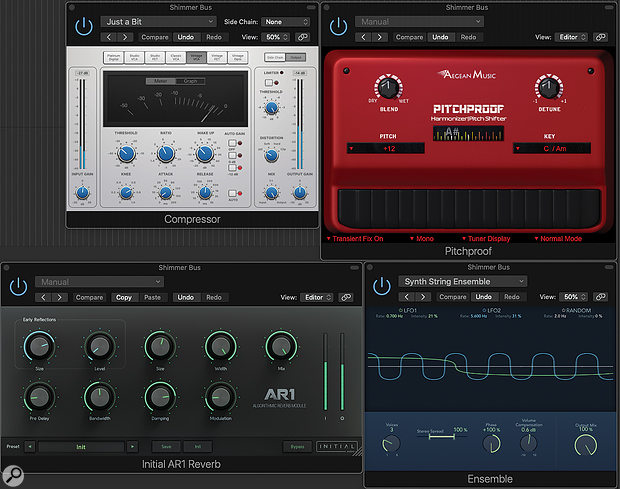 Here, you can see the routing used in Paul's Logic session — note that the 'dry' sound is treated to some insert effects, before being sent to the shimmer effect bus.

The key settings are a long reverb time, little or no HF damping, and a 100-percent wet mix. If your reverb has a top-cut filter, as the AR1 one does, then bring it down until the reverb sounds adequately smooth. If your reverb has modulation, try introducing some of that too, to add more texture to your shimmer effect. When working in Logic Pro, I generally use the old Silververb plug‑in — one of Logic's original 'low horsepower' plug‑ins, it somehow captures that '80s digital reverb sound perfectly.

Another option at this point is to add some soft tape delay to the shimmer effect, but I'll leave that up to you. Finally, we can add a modulation plug‑in, to lend further texture to the shimmer. As an alternative to straight chorus, you could try a Roland Dimension D emulation, or one of those ensemble effects that does a similar thing. I often use Logic's own Ensemble plug‑in, but any multi-voice chorus-type effect will produce broadly similar results if used subtly. 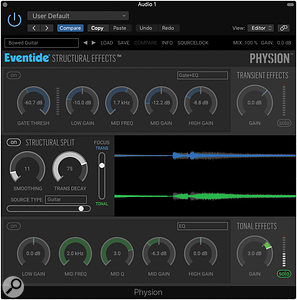 One of the presets of Eventide's Physion will deliver the sort of slow-attack effect that's often used by guitarists along with shimmer reverb.Now for the slow attack. If you're playing your part in live, while monitoring the shimmer effect, you can use your guitar's volume control or a pedal as outlined earlier — many ambient musicians do just that. Alternatively, a gate plug‑in that can be set to a fairly long attack time can be used to coax some passable slow attack sounds, simply by setting the attack to its maximum time (you can do this during the performance, or later). But the plug‑in I've found that works like magic in creating a slow-attack bowed guitar is Eventide's Physion. Set it to the Bowed Guitar preset, adjust the Trans Decay knob to get the speed of attack you require and it's job done!

Finally, the shimmer effect also works really well in turning an eBow part into a rich pad — again, a common ambient music technique. To ring the changes you can also try adding a sub-octave as well as an octave up; you just need a pitch–shifter that can generate two voices with different shifts. In fact, the more you play with this intriguing effect, the more you'll find ways of adding your own twists to it. Things to try right away include putting heavy flanging before the reverb in the shimmer path or using a sync'ed chopper plug‑in to turn the shimmer tails into rhythmic elements. If you have a granular processor, try that on the shimmer bus too as the end result often sounds much greater than the sum of its parts.

Most importantly, remember that this isn't just an effect for guitarists. It can work really well on vocals and piano-style sounds too, but you can try it with any source, whether 'playing' the effect during a performance, or adding some atmosphere and mystery after the fact. Have fun experimenting — I know I have!