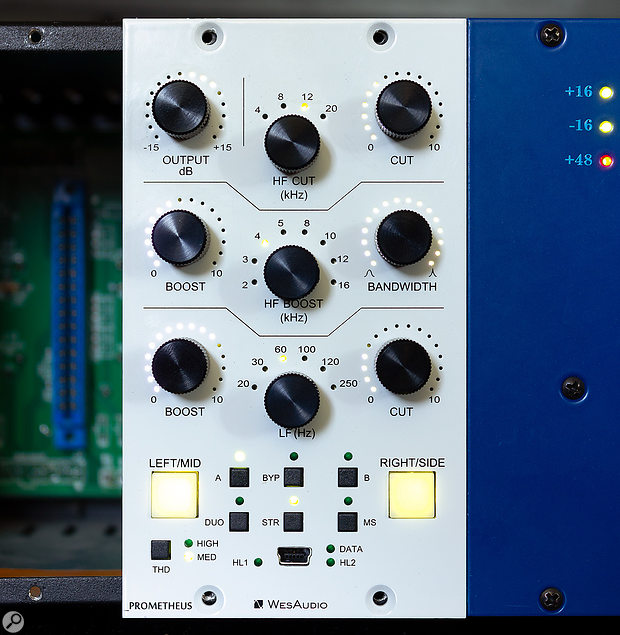 Two channels of Pultec-style EQ in a 500‑series module would be enough for most manufacturers. But not for Wes...

Wes Audio are one of a small handful of pioneering companies developing analogue hardware that can be digitally controlled from a DAW plug‑in. You just hook up their devices' analogue I/O, as with any analogue hardware, connect to your computer over USB, and enjoy two-way communication with your DAW. Importantly, though, Wes Audio's implementation of this concept means that everything can also be controlled from buttons and touch-sensitive encoders on the front panel — while you can enjoy the convenience of DAW integration, you don't have to.

One of the most recent additions to their portfolio is the Prometheus, which is, in essence, a two-channel, passive, solid-state EQ, akin to the famous Pultec EQP‑1A but without the valve stages. The design, which uses Carnhill inductors, is delivered in the popular 500‑series module format. It's one of a growing number of such 'ng500' modules from Wes, all named after the Titans of Greek mythology. Consuming only 70mA per rail, it will work in any VPR Alliance compliant 500‑series chassis/power supply unit, as long as the physical layout allows them to host double-wide modules. With third-party racks, the USB connection is via the front panel, but Wes also make a high-quality chassis with USB connection, the Titan, which communicates with ng500 modules via the card edge connector. 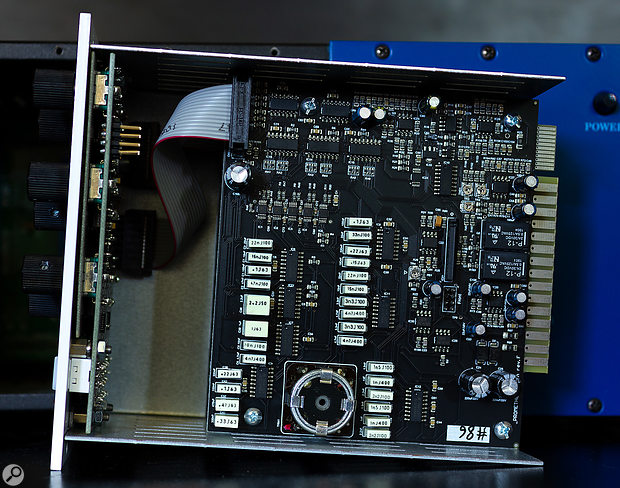 You can see one of the Carnhill inductors at the bottom of the PCB, which is neatly laid out using a combination of SMDs and through-hole components.

The Prometheus is a high-quality device built with top-notch components. Noise and crosstalk are low, frequency response with the EQ set flat is within -2dB between 10Hz and 150kHz, and there's plenty of headroom, with a maximum output of +24dBu. Since it also permits precision matching of settings across the two channels, it's tempting to describe the Prometheus as a mastering processor. It would suit that role, but given that it can be configured for dual mono, L-R stereo, or Mid‑Sides use, it's incredibly versatile, and just as useful when recording or mixing.

A single set of rotary encoders governs both channels when in L-R stereo mode, but when in dual or M‑S mode, two large buttons set whether they apply to the Left/Mid channel or the Right/Sides. 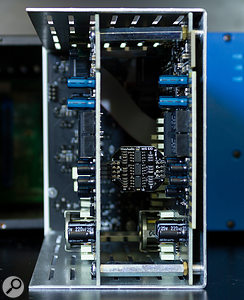 The Mid-Sides encoder/decoder circuitry sits on a daughterboard between the two main channel PCBs.The collection of buttons below the encoders allows you to select L-R, M‑S or dual mono operation, to engage a hard bypass, and to make plug‑in style A/B comparisons between two settings — I can't emphasise enough how refreshing it is to have that facility on a hardware EQ! There's also a button to engage a harmonic distortion circuit.

The control plug‑in is, sensibly, styled to resemble the hardware, so you instantly know where all the main channel controls are. The main difference is that there's a set of controls dedicated to each channel, so you don't have to switch between them. There's also a helpful graphical representation of the EQ curve beneath the virtual encoders. Beneath this are the equivalent of the hardware's button functions, and you have access here to more comparison snapshots than via the hardware (and, of course, to your DAW's plug‑in preset management system).

The installer is a chunky download. The Mac version (there's a Windows one too) is a shade over 400MB, and contains AAX, VST2 and VST3, and AU versions of all Wes' hardware-control plug‑ins. But once downloaded, installation is pain-free, and once in your DAW, you just select which connected Wes unit you want to control and you're off. Almost all the parameters are automatable, though I couldn't find a way to automate switching between stereo, mono and M‑S modes. Not that I'd want to...

I started with the Prometheus as a standard hardware device, not connected to my computer. The digital control makes it look and feel a bit different, but the layout is clean and spacious, and it all feels like 'real' hardware. The LEDs and backlit buttons make it easy to see what the current settings are, and I love the way the LED circles glow brighter for the encoder you're turning. If you've ever used a EQP‑1A-or similar EQ, whether hardware or a plug‑in, operation will feel instantly familiar.

This is one of the most elegant and unobtrusive control systems I've encountered.

I'd characterise the sound as generally clean and punchy, in that it doesn't suffer from the low-end softening effect that afflicts some valve-based Pultec clones I've used, and transients all emerged pleasingly intact. But there's still a subtle character to it. It's hard to 'drive' this processor into distortion, given the acres of headroom, but the THD adds a little more colour to proceedings, which I often found very welcome. It's a pleasant, musical-sounding distortion, and you can choose from two settings in addition to off: Med (1% THD) and a more audible High (2.5%). Switching between any settings, including the different channel configurations, is quick and quiet. 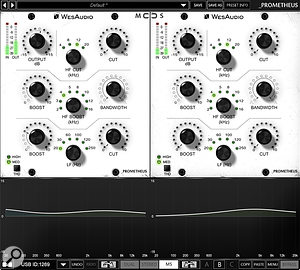 The link betweeen the plug‑in and the hardware is two-way, so as well as storing/recalling presets, you can record and play back automation from your DAW.Bringing the plug‑in into play, it was great to have settings made using the hardware controls automatically recalled next time I opened my DAW session, and automation read/write is a great bonus — for example, it allowed me to change settings in an instant to process the different kick sounds I'd used in a verse and chorus. It's the sort of convenience we've grown accustomed to with plug‑ins, but isn't an option with most hardware; you'd need to invest in a second unit. I've used a few plug‑in controlled hardware processors, and this is one of the most elegant and unobtrusive control systems I've encountered.

Cutting to the chase, I loved the Prometheus. It sounds classy and the layout is right too. The software is well executed and hassle-free, and as you can also use it without a computer it's as future-proof as any other hardware. I'd probably invest in a Titan rack if I were buying more than one of these ng500 units, since the front-panel USB connections could get in the way. But other than that, it's all great. The price is modest for two channels of this quality, even before you throw in the two-way communication with the plug‑in. That it's so configurable and versatile means it represents better value still. Did I mention there's a two-year warranty included in the price? Bravo!

Wes Audio's Prometheus — which sounds great, is easy to use, and offers good value for money — integrates with your DAW better than almost any other analogue hardware I can think of.