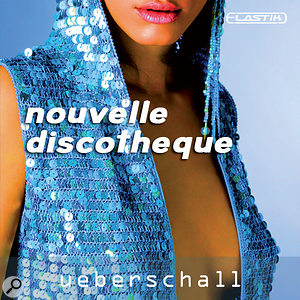 Disco music may have had its heyday in the 1970s, but it's still a significant influence in modern dance music, with mainstream artists — Madonna, Kylie and Lady Gaga included — often dipping into the genre's musical heritage to sprinkle onto a potential chart or club hit. As might be suggested by the 'Nouvelle' in the title, it's this more contemporary flavour of disco that Ueberschall are targeting with Nouvelle Discotheque. This construction-kit library, with Elastik 2 providing the front end for accessing and manipulating the loops, contains 1.2GB of sample data spread across some 600-odd loops. Like all recent Ueberschall libraries, it is available only as a download.

All 10 of the construction kits were recorded in a dance-friendly tempo range of 120-130 bpm. Each kit is also sub-divided into three or four musical sections, so if you want to build a complete song structure, this is perfectly possible. The one qualifier is that, unlike a good number of other Elastik titles, the kits don't include 'intro' or 'outro' sections. Intros are not such a big deal, but if you want something other than a fade-out for your track, you will have to get your hands dirty. Within each sub-section, however, you do get plenty to work with. A full drum-mix loop is augmented by separate kick, snare, hi-hat, clap, cymbal and, where used, percussion loops, so you can easily create your own drum mix or breakdown sections based on these. The other instrument loops include a mixture of guitar, bass, synths, piano and strings, depending upon the particular construction kit. There is an interesting combination here: the guitars are generally funky and straight from the world of '70s disco, while the strings lend a lush and very obvious classic disco vibe. However, the synth, bass and drums, while played in a disco style, on the whole, sound more contemporary. The mixture works though: definitely disco but with a modern twist.

In terms of its mood, the collection is very much 'good time' music, and while I could imagine tunes based just on these loops going down a storm in certain club contexts, they could also be mixed and matched into pop, electro or house tracks. Equally, if you needed music for a catwalk fashion show, Nouvelle Discotheque could turn a trick or two. Overall, the library contains a nice mixture of '70s disco vibe with modern production elements, but there are other disco-themed sample libraries out there that cover similar ground. That said, at this price point, Nouvelle Discotheque is unlikely to break the bank if you have the urge to get out all your Saturday Night Fever dance moves and bring them up to date.