A couple of Ueberschall's 'Score' titles have been reviewed in the pages of Sound On Sound: both Score FX (SOS March 2009) and Score FX II (SOS September 2010) used the Melodyne‑powered Liquid Instrument front end to provide a range of construction-kit and sound-design tools that were aimed most obviously at media composers working on TV, film, game or web‑media scoring. 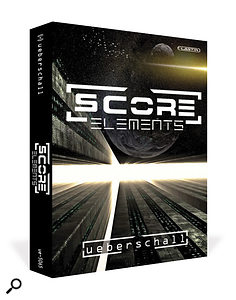 Ueberschall have now added Score Elements to this line, but rather than create another 'Liquid Instrument', they've opted to employ their equally useful Elastik front‑end. This lacks the melody-line editing of the Liquid titles, but it provides excellent tempo, pitch and filter options for use with the loop‑based content of the library.

The library itself comprises around 2.5GB of sample content, which is spread across approximately 800 loops and sounds. The material is split into five categories: Accents, Ambient Beds, Impacts, Transitions, and the wonderfully named Whooshes. Sub‑categories in each main category give an indication of the mood of the content.

The categories are pretty much self‑explanatory. The Accents are divided into Dark, Disturbing, Mysterious and Scary sub‑categories, and the bulk of these are not accents in the sense of true musical accents (where an individual beat gets emphasised), but short sound‑design loops that could easily be blended into a suitable arrangement to change its texture for a bar or two. Again, the labels give a good idea of the moods, although there it's not always successful: one person's 'dark' may be another person's 'disturbing', for example.

The Ambient Beds provide somewhat longer (30 seconds or more) evolving soundscapes, divided into bright and dark types, and many of these could easily form the basis for a full cue.

The Impacts category offers exactly what you might expect: lots of things being hit, ranging from obvious drum sounds, through metallic sounds and on into industrial/electronic territory. These are divided into big, medium and small rooms, each giving a different level of ambience. There's some good stuff amongst this lot, with plenty of ways to add a scary hit point in your horror soundtrack.

The final two categories (Transitions and Whooshes) overlap somewhat. There are both shorter and longer sounds here, with whooshes that build to, and fade from, a crescendo. The Transitions are exactly the sorts of sounds you might hear placed between two scenes in an episode of 24, Heroes or Flash Forward: slightly spooky and disorientating.

What's obviously very different from the two Liquid titles is the lack of construction kits, and the intention seems to be that these 'elements' will provide some additional ear-candy to drop into cues created with the Score FX and Score FX II construction kits.

Score Elements does not break radically new sonic ground, and if I were new to all three Ueberschall libraries I'd probably start with Score FX II, but I suspect media composers and those working on sound design for games will find plenty of useful ammunition here. John Walden