Video makers need to reduce noise too — and W43 lets them do it in time-honoured style... 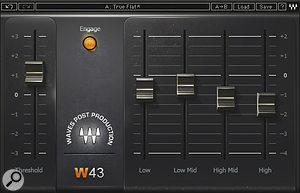 One of the biggest problems faced by engineers when recording audio for video is ambient noise. Camera 'whine', air conditioning hum and distant traffic rumble are all exampes. One long‑standing hardware solution is the rare Dolby Cat43, which is a spin‑off of Dolby A noise-reduction technology (see 'The Dolby Cat43' box). Now Waves have set out to make the Cat43 solution a little more convenient and readily available by emulating its features and functions in software form. The Waves W43 supports up to 24-bit, 192kHz resolution and is compatible with both Mac OS and Windows PC platforms supporting TDM, RTAS, Audio Suite, VST and Audio Units formats. The plug‑in is available separately or as part of the current Mercury Bundle. It's the second tool from Waves aimed at controlling troublesome noise, and joins the more expensive and complicated WNS (Waves Noise Suppressor).

Just like Dolby's original Cat43, the W43 noise reduction plug‑in is very simple to operate, having only four fixed frequency‑band sliders, plus a master Threshold slider.

W43 isn't intended for broadband hiss removal; its primary function is the reduction of continuous, low‑level ambient sounds with the minimum of audible processing artifacts. Waves also state that the plug‑in introduces no additional latency, so dialogue sync will not be affected.

Each of the four frequency-band sliders sets the amount of noise reduction applied to that band. The frequencies are separated into Low (30Hz to 80Hz), Low Mid (80Hz to 1kHz), High Mid (1kHz to 3kHz), and High (3kHz and above). It's recommended that W43 be inserted before other dynamics plug‑ins, such as compressors, which may otherwise further increase the level of noise. There's no metering or display on the interface, so the setup procedure is to start with the master Threshold control at zero (corresponding to ‑39dBFS), then pull down the slider or sliders that encompass the frequency range of the unwanted ambient noise.

The noise‑reduction process depends on the level of signal in each band, so when the signal exceeds the processing threshold, no gain reduction is applied. In other words, it is assumed that over a certain level the noise will be masked by the main audio. When the signal drops below each band's threshold, it is subjected to gain reduction. In order to minimise audible artifacts, specifically tonal changes, the fader should be pulled down only far enough to bring the ambient sounds down to an acceptable level. It is also possible to push the individual sliders above zero, again to mimic the original hardware, in which case some gain increase within that band is applied when the signal falls below the threshold. This provides a useful method of identifying which bands contain most of the ambient noise.

As with the original Dolby hardware unit, having all the faders at zero doesn't automatically signify zero processing, though a true flat setting is available as one of the factory presets. Also, while the Engage button enables and disables the noise‑reduction process, the processor still has some effect on the audio passing through when it's disabled. The conventional plug‑in bypass button in your DAW should be used for a truly clean bypass. For making A/B comparisons and undoing changes, as well as saving and loading presets, the standard Waves toolbar is included. 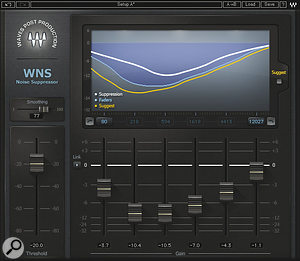 The W43 is much more simple to operate than the Waves Noise Supressor, and costs a lot less too!

While most noise-reduction plug‑ins take a bit of getting used to, this one is extremely simple to use. In most cases, you can simply leave the master Threshold control at zero and use just the four frequency sliders. Unlike typical multi‑band de‑noisers, there are no 'tinkly' or 'watery' processing artifacts, though if you find it necessary to pull down the High slider to any significant degree, there may be a little softening of high frequencies. This side‑effect is especially apparent at lower signal levels.

Personally, I would have liked to see a threshold display for each band, even if just a single 'LED' to show when the signal is above or below the user‑set threshold. Perhaps metering has been left out because it would mean a departure from the original Dolby hardware. As it is, you have to set the faders entirely by ear, so it's up to you to reach the best subjective compromise between residual noise and tonal change.

In a real‑life situation, many types of background noise can be significantly reduced without compromising the sound of dialogue to an unacceptable degree, though it is probably fair to say that if the noise falls into just one of the frequency bands, the process is more benign than if it straddles two or more bands. There may also be situations where material is best processed using a combination of W43 and a conventional broadband noise‑reduction plug‑in.

What you need from a noise‑reduction tool may vary from take to take; sometimes you may need to cut out a single percussive sound in the background, in which case spectral editing will yield the best results. On the other hand, broadband hiss, such as tape noise, responds best to multi-band techniques where each of several hundred bands is essentially an expander with its own threshold setting and where the thresholds are set either by taking a noise fingerprint (from a noise‑only section of the recording) or, in more sophisticated models, by a correlation process that attempts to identify noise in the presence of an audio signal. W43 is rather more straightforward, but has the benefit that it emulates a well‑known piece of hardware that's often used in the video industry, and is well suited to dealing with many of its noise problems.

If you find that a recording suffers from a modest level of air‑conditioning hum or rumble from passing traffic, W43 provides a very fast and simple way of dealing with it, but as with all such devices, the result will be a compromise between degree of noise reduction and introduction of audio artifacts, which in this case often means some loss of high‑end detail and clarity.

W43 is clearly useful when treating dialogue for video, but may also be of benefit when cleaning up audio‑only location recordings, such as background sounds destined for Foley use, or sounds to be used in sample libraries. It's also a relatively affordable noise-reduction solution, especially considering the 40 percent discount on Waves products available at the time of going to press.

As long as you accept that all such easy‑to‑operate systems have their limitations, the W43 is a useful ally anytime you have to deal with recordings made outside the safe confines of the recording studio, especially where the noise problem isn't too severe or too broadband.

While there are numerous noise‑reduction plug‑ins around, the closest to this approach is probably a multi‑band expander. Waves also produce another, slightly more advanced plug‑in, the WNS Noise Suppressor. Rival noise‑reduction suites include Izotope RX and CEDAR's DNS software. BIAS SoundSoap Pro also provides a simple‑to‑operate alternative that is capable of dealing with broadband noise.

Dolby's first professional tape noise‑reduction system, Dolby A, was a four‑band, encode‑decode, compression‑expansion system. Compressing the audio signal before recording to tape allowed quieter sound elements to be raised well above the tape noise floor. Complementary expansion on replay restored signals to their rightful level, while simultaneously pushing the tape noise down to make it less audible. Dividing the audio spectrum into four independently processed bands enabled the system to apply the dynamic processing more effectively and with minimal audible side effects. In essence, it only provided compansion if the signals in each band were quiet enough to warrant it, relying on the principles of noise masking, and this was the key to its remarkable success.

Although intended to be used as a complementary encode‑decode system, it was discovered that Dolby A was also useful when used in decode‑only mode, in which case it served as a four‑band downward expander.

As the system divides the audio spectrum into four bands, each band effectively operates as a dynamic filter, increasing the attenuation as the signal gets quieter. This expansion effect could provide a useful amount of noise reduction in some situations, quieter sounds being reduced while louder sounds were left unaffected. Dolby capitalised on this by developing the Cat43 system, which became extremely popular in film and TV dubbing circles to clean up location dialogue soundtracks, helping to remove the unwanted noise of traffic rumble, fans, lighting and so on, while leaving the speech largely unscathed.

The Cat43 unit used standard Dolby A noise‑reduction cards — one for each channel being processed — in a bespoke rackmounting frame, which configured the cards for downward expansion. A dedicated remote-control unit linked to the frame carried five faders (much like you see on the Waves W43). The first adjusted the overall threshold level, to ensure that the bulk of the dialogue signal sat comfortably in the 'null zone', so that its level was unchanged. The other four faders controlled the amount of downward expansion applied by each of the four audio bands, allowing the user to decide how much to reduce the unwanted noises, and in which frequency regions.

The Cat43 was a noise-reduction system and not a noise-removal system — its abilities were limited by the modest amount of expansion available in the Dolby A card — but it proved immensely useful nonetheless. As a result, the Cat43 system has been used on thousands of movie and TV soundtracks over the years, to improve the quality of location dialogue.

When Dolby launched the far more sophisticated multi-band SR noise-reduction system to replace the ageing Dolby A, it also superseded Cat43 with Cat430 — the same basic idea, but using Dolby SR cards instead of Dolby A cards. The remote control was also simplified to just two faders, adjusting the high-band and low-band attenuation either side of the wanted speech band, plus a rotary master threshold adjuster.

Both the Cat43 and Cat430 systems were analogue, and while that meant zero processing delay, it also meant limited noise‑reduction capability. Alternative digital systems are now available working on similar basic principles, but with the advantage of more accurate and efficient digital signal processing. The CEDAR DNS range of noise‑reduction systems is amongst the most highly regarded. Hugh Robjohns

W43 provides a simple and generally benign method of processing to reduce many types of ambient noise contamination. It's a useful alternative to hardware, for general noise reduction where the noise is caused by predictable sources, such as air conditioning, machinery or camera motors. It isn't a cure‑all, but can be very effective where the noise contamination problem isn't too serious.