Universal Audio take another step — or five — towards recreating every piece of classic audio hardware ever made! 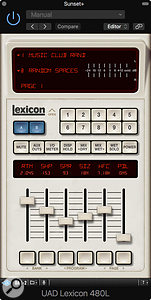 Universal Audio UAD 9.7 - Lexicon 480L plug-in.The term 'industry standard' is somewhat overused these days, but it really does apply to the Lexicon 480L. Back in the day, there were few high-end studios that didn't have its LARC controller perched on the console somewhere — and many still do. Despite the advent of newer technologies such as convolution, the 480L still remains a favourite because of its unique sonic character. A significant part of the 'Lexicon sound' is the use of modulation within the feedback paths of the reverb algorithm to add density and complexity to the sound and avoid resonant frequencies piling up.

Basic convolution can't capture modulation, so it's tough to replicate the Lexicon sound without the correct algorithmic structure. UA's 480L emulation is derived from the final v4.10 firmware, which offers Plate, Ambience, Hall, Random and Room algorithms as well as some creative non-reverb effects including doubling, tremolo, 'reverse'-style reverb and chorus.

The plug-in interface recreates the famous LARC remote control, adapted for a DAW environment. Its red virtual LED display shows the current bank and the selection from within that bank; you can use the A/B buttons to flip between two different settings, and a little open arrow gives you access to input and output level trimmers. There are 10 banks of 10 presets that can't be overwritten, though of course you can make changes and then save your edit as a preset within the host DAW.

Worthy of note for those unfamiliar with the 480L is the Shape control, which adjusts the contour of the reverb decay tail, and the designation of the modulation parameters, which are termed Spin and Wander. Also a little unconventional is the wet/dry mix adjustment. Wet Solo gives you reverb only, but when this is turned off, the Mix Wet and Mix Dry buttons are used to increase or decrease the wet/dry balance a step at a time. In the plug-in, the power button acts as a bypass control.

Even after all this time, the 480L still sounds impressive, though maybe that's just because we associate its sound with classic records. It is certainly very versatile, offering everything from compact room ambience treatments to hugh ethereal swells, taking in some very plausible rooms, halls and plates along the way. The slightly grainy texture of the reverb adds character, while the virtual LARC makes it so easy to control. A reverb that once cost the price of a very nice car is now available for the price of a modest bicycle — not bad at al! 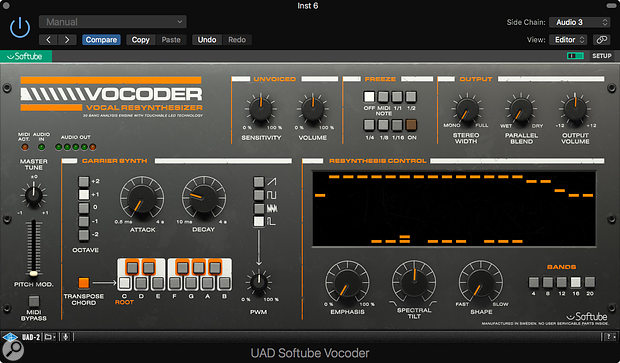 Softube's Vocoder emulates the sound of classic analogue vocoders using a filter bank that offers up to 20 filter bands if good vocal articulation is what you're after, or as few as four if it's not! A spectral tilt control provides an instant way to modify the timbre of the vocoded sound, and there's an in‑built carrier synth offering simple attack and decay controls, with a choice of four waveforms.

The bar-graph display shows activity in the various bands and also allows band levels to be adjusted. There's also a freeze function that can be triggered on a tempo-locked basis or over MIDI, with a choice of note division. In the output section there's a control for stereo width and a wet/dry blend, as well as a master volume. Logic users will find the Vocoder in the MIDI Controlled Effects section of their plug-in menu, enabling it to be loaded onto an instrument track and then fed audio from another track courtesy of its side-chain input.

The AMS Neve DFC is a digital console currently popular in TV and movie production. UA's plug-in replicates the channel strip from that console, with a flexible four-band parametric EQ, two filters, compressor with side-chain access, expander, gate and limiter. Graphical display and adjustment of both the EQ and dynamics processing is available on the GUI front panel, where the order of the processor blocks can also be set up. The ability to use multiple elements at the same time and to be able to chain them in any sensible order is certainly attractive. As this plug-in relies on the same DSP algorithms used in the hardware console, there's no question as to its authenticity, though whether it offers sufficient benefits over your existing EQs and dynamics processors is down to personal taste. 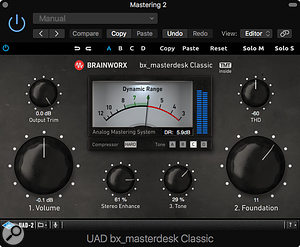 Brainworx's bx_masterdesk Classic is a simplified version of the existing bx_masterdesk, built around the same processing chain but with a cleverly reduced control set. It is designed to make mastering easier for the less experienced user, and offers just three main controls designated Volume, Tone and Foundation, the last of which is designed to make the mix more 'solid' sounding by lifting the lows in a very flattering, non-boomy way.

Further controls adjust the stereo width enhancement and subtle distortion characteristics, and a dynamic range meter inhabits the middle of the screen with the sweet spot range highlighted in green. I have to say that this plug-in is a joy to use: the Foundation control makes the bass end sound just as I want it to without lots of fiddling about. 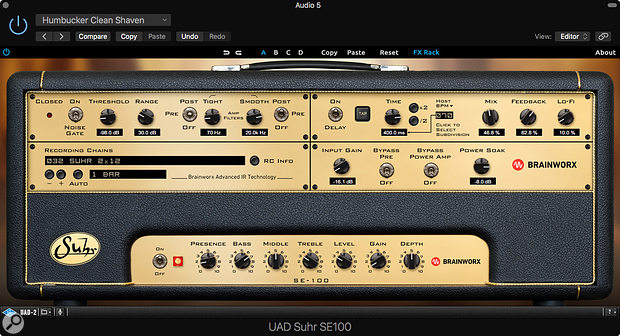 As you can probably guess by the look of the UAD Suhr SE100, there's a certain UK influence behind this three-channel guitar amp. The original hardware was the result of a collaboration between John Suhr and guitarist Pete Thorn, based on a hot-rodded Marshall circuit with 'plexi'-style transformers and EL34 power stage, but offering a lot more gain. Modelled by Brainworx and fully endorsed by Suhr and Thorn, the plug-in aims to deliver the same wide range of tones as the original, and adds some 'behind the scenes' controls that include a noise gate and a digital delay. There's also the option to choose from a very wide range of virtual mic/cabinet combinations, or alternatively to switch off the cab emulation altogether and use your own. Similarly, the power amp and preamp stages can be bypassed separately. While this amp is a bit too full-on aggressive for my own tastes, anyone doing modern rock or metal will appreciate it.

Taken together, these new additions to the UAD arsenal are pretty impressive, and while everyone will have their own favourites, the jewels in the crown for me are the 480L and that wonderfully simple but effective Brainworx bx_masterdesk Classic. As both are mixing tools, those without the Apollo's latency-free capability can use them without compromise. The other plug-ins are also meticulously modelled and do precisely what is asked of them without fuss — and because users always get a free demo period with the new plug-ins when updating their UAD software, you have plenty of time to decide which ones you need to add to your collection.

UA's v9.7 software introduces yet more tempting plug-in goodies, most notably the reverb that has graced more hits than I've had hot dinners.