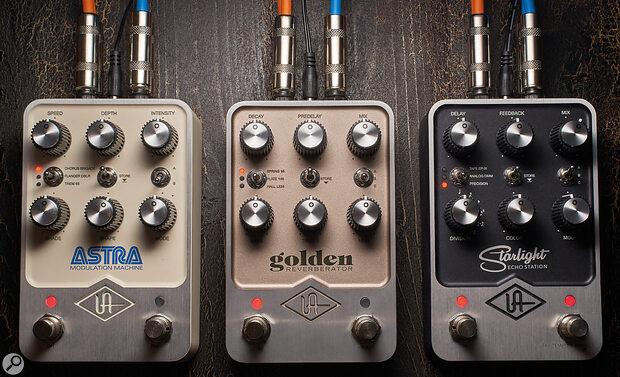 UA have long been among the best developers of analogue‑modelling software, so the world is expecting great things of these little boxes. Do they deliver the goods?

Universal Audio signalled their intention to enter the guitarist’s hardware world in 2017, when they announced the OX Amp Top Box, and they’ve now released a set of conventional stompboxes, comprising a modulation effects unit, a delay and a reverb. All three share the same aluminium cases that slope gently down toward you, and are somewhat larger than typical pedals. They also share the same hardware, with only minor differences: two‑ or three‑position ‘variation’ switches, depending upon the unit, a two‑position mode switch on the Starlight where the Astra and Golden have modulation knobs, and a six‑position clock divider/ping‑pong selector on the Starlight, where the Astra and Golden have tone controls. Other than that, the only visible differences are their colours and silk screening. Ah yes… the silk screening. When I was reviewing the units in my studio I didn’t give this a moment’s thought because it’s well lit and the legends, while small, are clean and smart. But when I took them to my dungeon with the dim lighting and the big amps I found myself struggling to see what was what.

Inevitably, all three pedals also share many less visible features, including ARM‑powered processors that, unlike earlier generations of modelling pedals, are capable of running unadulterated mathematical models at high resolution rather than the approximations that were previously necessary. On the other hand, each offers but a single preset memory, and this is bound to cause controversy.

As supplied from the factory, the Astra Modulation Machine hosts three emulations. The first of these, Chorus Brigade, recreates the sound of the Boss CE‑1 Chorus Ensemble, and the only difference between the original and the emulation lies in a second output mode on the UA pedal. When using both outputs of a CE‑1, the original signal appears on one and the processed signal on the other. The Astra emulates this in its Classic mode but, in Dual Stereo mode, a single input is split into two, both sides are processed, and the results are then sent to the two outputs 90 degrees out of phase from one another. The result is a classy swirl that can’t be obtained from the original. I compared the Astra with my original CE‑1 and found the two to be very similar although, for any given rate, the chorus depth of the Astra is deeper. Do I care? In truth, not at all. The Astra sounds great, and who’s to say that a second CE‑1 would sound exactly the same as mine? I doubt that it would. 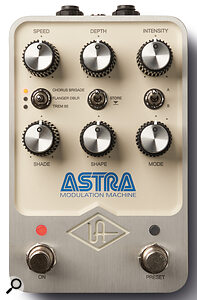 The Astra Modulation Machine.The next model emulates the MXR Model 126 Flanger/Doubler. UA have already cloned this as a plug‑in and, while the Astra doesn’t have the same layout, all of its controls and switches are present and correct. However, whereas the original was a single‑channel device, the Astra can also offer wide stereo effects — these may not be authentic, but they’re very nice. What’s more, and like the Chorus Brigade, you can control the modulation rate using tap tempo, which is another bonus. Or rather, it would be if this facility were available using the factory settings. Unfortunately, you can only obtain it after modifying a hidden setting using the UAFX mobile app, which was still in development at the time of review. I can’t imagine what UA’s designers were smoking when they made that decision.

The third of the factory‑loaded models is a tremolo derived from the misnamed vibrato of mid‑1960s Fender amps such as the Deluxe Reverb. However, while the relationship between faster rates and lesser depth has been faithfully modelled, as has the way that the vibrato ducks when you play loudly and then becomes more apparent as the note...