A set of suspended chimes being played by the wind can be ethereal and mysterious or deeply relaxing, and they're a great way to set a musical mood. I love them and have many of my own, so was very interested to receive this sample library from Universal Sampling, aka composer Jeffrey Hayat. 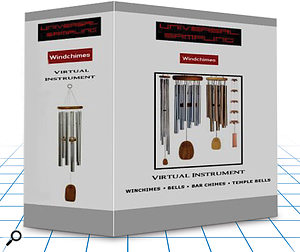 Windchimes consists of 20 Kontakt instruments in all, between them featuring two soprano, two alto, three tenor and one bass set of windchimes, a set of horizontally mounted chime bars, small temple bells and a bonus set of rainsticks. All have been beautifully close‑recorded in stereo 24‑bit, 44.1kHz or 48kHz format but, even so, I was surprised at the huge total of 775 samples and around 4GB of data.

This is because the bulk of this library consists of non‑looped recordings of random windchime 'gusts', comprising several dozen short, medium and long variations ranging from about five to 40 seconds in length, mapped across several octaves of individual keys. Some might complain that these are effectively a set of mini‑performances of someone rattling some windchimes rather than instruments, albeit recorded beautifully, and they would be perfectly correct.

However, it can be very difficult to recreate the 'randomness' of real windchimes, and this approach does let you play them in isolation or in combination to create a variety of natural‑sounding chiming effects ranging from sparse to hectic. No Kontakt features other than velocity sensitivity are exploited, and no effects have been added either; the aim here is to provide simple realism.

On the negative side, no information is provided about the tuning of each set of windchimes, which is, after all, what determines their mood. The effect of pentatonic‑tuned chimes is very different from that of (for instance) those tuned to a whole‑tone scale, so you're on your own when it comes to fitting these sounds into your own musical compositions.

I was hoping that the two 'stretched' instruments, featuring individual windchime bars with three velocity layers and six round‑robin alternatives to avoid repetition, would offer more versatility. However, while each sounded lovely, each bar was only playable over an octave range, with very obvious discontinuities in both pitch and timbre to the next in the sequence, which rather limited their melodic scope.

Overall, I can't help thinking that, given the obvious time and effort that went into its recording, this library misses various creative opportunities. The tiny 55MB Wind Chimes set from Bolder Sounds, for instance, not only offers a small selection of 'random' atmospheres, but also a huge range of other options, including three types of beater, various loops, pads, effects and even granular synthesis, as well as letting you play its 29 instruments in any key and scale option you like. However, Universal Sampling's Windchimes certainly fills a gap in the market for more limited, but very realistic, windchime effects, and is excellent value for money. Martin Walker