Regular readers of our sample library reviews might be forgiven for thinking that Ueberschall's Score FX II is just the same as the original Score FX library, which I reviewed back in the March 2009 issue of Sound On Sound. Well, yes and no. Yes, it is a Liquid Instruments library and, yes, it is aimed at those producing music for film, TV or similar applications. And, while it also has its fair share of atmospheric beds, accents and rhythmic loops, there are three features of this newer library that make it somewhat different from the earlier title. First, the musical moods are less dark and scary, second, greater emphasis is placed on the construction kits and, third (and probably most significant), Score FX II features more melodic elements. This last difference means that this library can, if users so wish, be used to create 'cues with a tune' from just the samples provided. 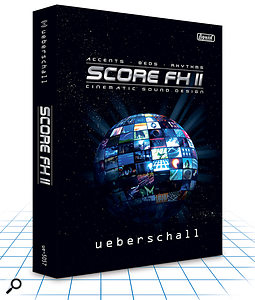 The 7GB of sample material is organised into five basic sections: construction kits, groove patterns, instrument licks, accents, and ambient beds. The first of these dominates, with 30 full kits provided. Titles such as 'Sleeplessness', 'Midnight Sky' and 'Forgiveness' give a good idea of the style of the material. The moods are more gentle than the original collection, with strong rhythmic elements (but avoiding a traditional drum kit). There is a definite 'world' or 'ethnic' feel to many of the kits, and I was reminded of some of Robbie Robertson's Native American material in places, while other kits had a more obvious eastern influence. Within each kit plenty of loops are provided, with sub‑sections for accents, bass, beds, drums, rhythmic elements and solo instruments. The last include atmospheric piano, acoustic guitar and some beautifully evocative duduk playing. The Melodyne‑based phrase editing of the Liquid Instruments front end provides considerable extra flexibility with this melodic material.

Aside from the construction kits, the other sections are all well populated. I was particularly impressed with the ambient beds, many of which are both long and evolving. The groove patterns are also excellent, with lots of rather quirky rhythmic loops created with a very diverse range of instruments, featuring drums, percussion and more melodic sound sources. Aside from the piano and duduk, the solo instruments section also includes sopilka (a Ukrainian flute‑like instrument) and vocal phrases. The vocals are split into soprano, tenor and child groups and are mostly vocalised vowel sounds.

Like the original release, Score FX II packs in a lot of content. The material is excellent and, providing you are happy to use the Liquid Instrument front‑end, there is plenty here to interest media composers looking for some fresh inspiration. John Walden