Given the title, there are no prizes for guessing that the recordings for this sample library were made in Nashville (well, actually a few miles south) in the very highly regarded live room of the Sound Kitchen facility. Produced and engineered by Chuck Ainlay and played by Harry Stinson, the credit list of the team is suitably jaw-dropping. Between them, these guys have worked with Mark Knopfler, Sheryl Crow, George Strait, The Dixie Chicks, Steve Earle, Lyle Lovett, George Jones, Peter Frampton, Trisha Yearwood, Faith Hill and Martina McBride, to name just a few. Given the location and many of the names in the credit list, you could be forgiven for thinking this 10GB, 26‑piece drum instrument collection is aimed at country music producers. Well, it certainly ought to appeal to that market, but there is enough variety in the basic drum sounds — and in the way they have been incorporated and processed in the various SD kit presets included — that they could be equally at home in pop, rock, punk and a whole range of other styles. 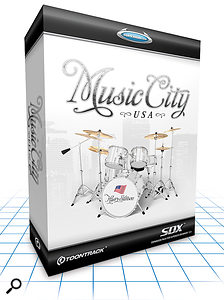 The installation offers you a choice between different levels of sample detail if hard drive space is an issue, while the SD engine can, of course, also lighten the load of the detailed sampling by using settings such as 16‑bit mode. I tried the latter with a few of the larger kit presets (which loaded over a gigabyte of samples at 24‑bit) and the results were still exceptionally good. For tracking, this mode is more than adequate, and I suspect most folk would be happy enough to use them in a final mix.

The kit pieces are beautifully recorded. The cymbals are crisp and clear and the crashes feature long, smooth tails. Both the snares and kicks cover a good range of ground. As a good 'all round' collection of mainstream acoustic drum sounds, Music City USA has a lot to recommend it.

As with other expansion packs, once it's installed and authorised, users can download a collection of MIDI grooves. As someone who fully understands his own limitations with a pair of drum sticks, to me this part of the package is just as important as the sounds themselves. This collection does not disappoint and covers styles from Chicago blues through to straight‑ahead pop/rock. The collection includes a good number of 3/4 time, half‑time and shuffle patterns, so those looking for a wider palette of country music styles are also covered.

As ever with Toontrack expansion packs, the price is not in the pocket money range. but if Superior Drummer 2 is your drum production tool, the quality and versatility of samples and MIDI grooves make this money well spent. John Walden