The world isn't short of decent drum libraries, but it never hurts to have more sounds available, and what Vir2 have done is to create something almost as complex and comprehensive as dedicated drum instruments such as BFD, but within the NI Kontakt environment. (It will run in the full version of Kontakt 5 or the Player version, which is included with your purchase.) 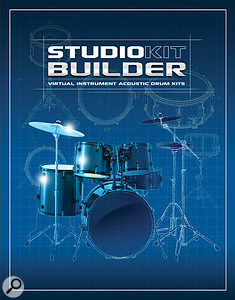 This library comprises around 8.5GB of samples, Kontakt files and MIDI performances and, in terms of genres and kit sounds, these combine to create one of the most comprehensive drum libraries available, with 54 different kits in total. For each kit, you can choose to load different kit pieces (for example, one of 26 different snare drums), or to place the kit in different virtual studios for a different effect. The kits range from brushed jazz, through drum & bass to hard rock.

Quantity and flexibility, then, are covered. But what about quality? The sounds themselves are, for the most part, very decent indeed: cleanly recorded multisamples of useful instruments. However, there are some annoying rattles at very low levels on a tom or two (which sound, to me, more like something on the instrument being recorded than a problem with the fidelity of the recording). There are a few odd choices and omissions, too. While there's nothing wrong with including a Tama Rockstar snare, for example — it's a popular affordable kit that many people will own and will be familiar with — this is the only Tama on offer and it's far from being the company's best. Still on the subject of snares, while there are a couple of Ludwig offerings here, there's no Black Beauty, which is one of the most useful and widely employed snares for recording. So although this is a well-populated instrument, it's hard to agree with Vir2's 'complete encyclopedia of acoustic drum kits' tag.

Thankfully, then, there are plenty of redeeming features that will probably lead me to use this library a fair bit now I've got to grips with it. First, the interface is much better than that of most Kontakt libraries, in that not only are there stylish graphics, but it's very functional too. There are dedicated panels for an output/FX mixer, key mapping, and viewing and selecting the kit pieces. If you prefer to use everything within your DAW host, there are dedicated templates for use with most of the leading DAWs, too. 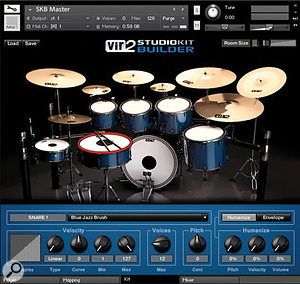 There are also some really useful touches for those looking for a performance instrument, whether they plan on using a keyboard, pads or an electronic drum kit. Click on a kit piece, for example, and a panel pops out which not only enables you to change the kit piece, alter its pitch and so on, but also provides quick and easy-to-use controls for changing the velocity response curves and 'humanising' various aspects of the performance, or applying envelopes to them. The humanise functions can help if you're trying to avoid the rigidity that's sometimes inherent in programming, obviously. The uses of the envelope control are less immediately obvious but, for example, I found it helpful in tuning the response of multiple ghost notes, so that they could diminish in time with the tempo of a particular track before the next clean hit. It's not impossible to do these things in other such kits, but it's great that it has been made so quick and easy here.

By default, the kits all seem to be panned from a drummer's, rather than an audience's, perspective. There's nothing wrong with that, but some people do prefer it the other way around. And while the mixer page allows you to alter pan settings of individual pieces, or to change the left-right balance of the whole kit, I could find no simple way to reverse the whole kit, or even just the toms and cymbals, with a single click, other than by routing everything to a drums bus in my DAW and reversing the LR pan settings on the bus. That's not a huge problem, but it would have made setup and auditioning that bit easier.

The different room options are genuinely useful, and although some felt over-roomy to me, I'm sure plenty of others will prefer those sounds to the short, bright-sounding one that became my go-to choice. In any case, you're able to blend in the desired amount of room using a slider in the main instrument window, or a virtual fader in the mixer.

There are similar faders for each kit-piece's close mics in the mixer, with associated controls determining how much of a particular kit piece is used in the overhead (OH) and room signals, and for the 'DI' (presumably meaning close mic), OH and Master channels. Any of these can be soloed or muted, and another button opens up a complex effects window, where you can tweak the processing on each.

All in all, then, although there are a few of the more subtle touches missing, when compared with the leading dedicated drum instruments such as BFD, Superior Drummer and the like, there aren't many missing, and Studio Kit Builder offers some nice touches of its own. As such products go, it offers pretty decent value for money, and I can imagine it proving popular, particularly if more kits were to be made available in the future. Matt Houghton