We all like to think we have a sixth sense. Mine alerts me to marketing hype at the merest whiff of a press release, and I felt exactly that 'BS sense' tingling when I first read about Vox's amPhone AC30 guitar-modelling headphones. It looked for all the world like a simple marriage of convenience between Audio-Technica, who provide the headphones, and Vox, who provide the guitar amp modelling. But having now tried them out over a number of weeks, I'm pleased to report that my fears were largely unfounded. 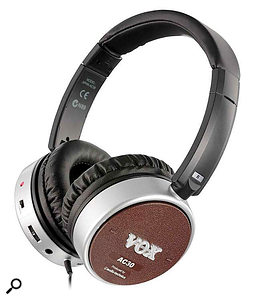 I'm not saying that these are the best cans in the world, because they're certainly not up to mix monitoring or other critical listening standards, largely because they suffer from the boxy resonance that you get from most cheaper plastic closed-back designs, and this inevitably makes setting mix levels and fine-tuning effects as much a game of chance as of skill. Nor is the amp modelling, borrowed wholesale from Vox's Amplug range, the best in the world. In both respects, they're far from being what I'd describe as 'professional quality'.

All that notwithstanding, blending the two products has still created something that I actually quite like. As I've said, they're not really designed for serious professional use, but think of them for what they do offer and you might find that you quite like them too: they're lightweight and convenient, they fit nicely, and they're thus very comfortable to wear.

With the guitar unplugged, or the modelling switched off, the amPhones can be used as standard headphones, with no batteries required. Insert two AAA batteries and plug the quarter-inch jack into your guitar, and you can use the Amplug-style controls on one earpiece to switch in the amp-modelling circuitry. You can also plug a smartphone or other audio playback device into an aux input socket, and there are the same tone and level controls as you'll find on the Amplug AC30. As with that product, there are also models for different styles of amp, including bass.

Although the guitar modelling may not be world-beating in quality, the sound really isn't that bad. In fact, while I might not want to use it on a final recording, it certainly feels pretty responsive, and does a passable enough imitation of an AC30 that I could happily rehearse at home, or in a quiet corner of a studio while band-mates recorded their instruments, without fear of intruding on the session. And that's really what this product is all about. So, while they may well be the result of a marketing opportunity spotted by Vox, I can well imagine the amPhones being attractive to quite a number of guitarists. Just don't expect the ultimate in professional studio quality and you won't be disappointed!