Once again, Waves have tried to bottle the magic of a celebrated mix engineer, so that it can be uncorked in the home studio...

Star mix engineer Manny Marroquin has worked with a diverse range of successful artists, from Alicia Keys and Lana Del Rey to John Mayer and the Rolling Stones. Following the success of similar partnerships with the likes of Chris Lord-Alge and Eddie Kramer, Waves have now teamed up with Manny to produce a suite of six plug-ins that embody some of his typical processing chains. Like the other Waves Signature series bundles, these plug-ins don't emulate individual pieces of gear, but distill complex signal chains down to a relatively small number of user controls. These native plug-ins run on Mac OS and Windows at up to 24-bit/96kHz resolution and support RTAS, AudioSuite, VST and Audio Units. Authorisation uses Waves' online registration system, where your authorisation may be stored on a specific computer, on a standard memory stick or in the Waves Cloud. 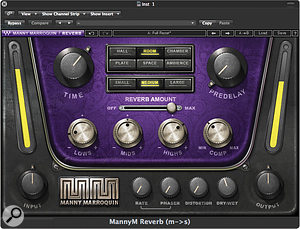 The Reverb plug-in, which is provided in both mono and stereo versions, presents six different reverbs, with three different 'room' size options for each. The plug-in also includes EQ and compression that can be applied to the reverb, along with more unusual treatments including phasing and distortion, which are characteristic of Marroquin's mixes. The overall effect has the usual Mix control, but there's a separate fader for Reverb Amount, so you can apply the EQ, phasing and distortion to the dry sound as well as the reverb. The reverb types comprise Hall, Room, Chamber, Plate, Space and Ambience and are based on convolution, which means that they are able to replicate the originals with a high degree of accuracy. Other than level and balance settings, the user can select the reverb type and size, the decay time, pre-delay time and the EQ over three bands (60Hz, 2kHz and 8kHz). Other controls adjust the compressor, the phaser speed and the amount of distortion. All the plug-ins have separate input and output level controls with level metering.

On vocals, the reverbs provide a great sense of space and place without swamping the dry sound, and in this respect they are somewhat Lexicon-like, but with less of the characteristic 'cat hissing' effect in the reverb tail. The Small Plate and Medium Room algorithms work particularly well on drums. Adding a touch of phaser brings movement to the reverb tail, while using the distortion control in the bottom 25 percent of its travel adds a warmth and thickness that still sounds more or less natural. Go further and it gets pretty dirty-sounding — which may be appropriate for some genres. The palette of six reverb types and three sizes encompasses everything from a very short ambience to a long, washy effect, so all the usual reverb requirements are covered in a classy and musically endearing way. 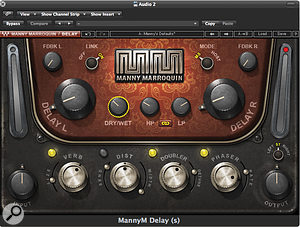 The familiar delay effect gets a similar makeover, whereby a basic stereo delay has been augmented with reverb, distortion and that phaser again, plus a pitch-shift doubler with variable detune. The control set is fairly straightforward, with high- and low-pass filters, separate left and right delay and feedback controls, plus further adjustment for each of the four added effects. Each of these has one knob for the amount added and a curved slider (two for distortion) next to the knob for changing the key parameter of the effect. As with Reverb, the distortion is added as a parallel effect and Width adjusts the stereo impression of the added distortion component. The delay time can be set manually or sync'ed to the DAW tempo, and there's a link button for the two channels. Another link button locks the high- and low-pass filters so that they can be used together to create a simultaneous opening and closing filter effect — one moves up while the other moves down. Each of the four additional effects has its own On button, and there are level controls for the overall input and output.

This turns out to be an extremely useful plug-in for creating contemporary vocal effects: the combination of delay and reverb often yields better results than reverb alone. There may only be one reverb available in this plug-in, but it is well suited to vocal processing. The ability to add pitch detuning to the delays thickens them up significantly, while the filters allow the repeats to be softened so that they sit comfortably behind the main vocal. Add the phaser to slapback delay with a touch of distortion and you can get very close to those trippy old Beatles vocal sounds too. I know that a lot of people struggle to find the right vocal processing approach, but other than EQ and compression, this plug-in has all the right tools, and they are arranged in a manner that makes them easy to handle. 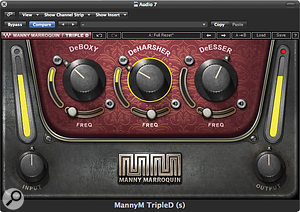 A problem faced by professionals as well as recording musicians is how to avoid that annoying boxy lower mid-range build-up that robs your mixes of clarity. The Triple D plug-in is a dedicated 'de-nastifier' that tackles boxy lows, mid-range harshness and sibilance in one plug-in. It is particularly adept at polishing vocals, but has other applications wherever similar problems need dealing with.

Using split-band dynamics processing, this plug-in has a user-adjustable threshold for each of its three sections above which the offending frequency is attenuated compressor-style. For each of the three bands, the user can adjust the threshold and the centre frequency affected, and a 'listen' button allows the filtered signal to be auditioned independently for each band, to aid setting up. Metering next to each 'grot-reduction' knob shows how much attenuation is taking place in the relevant band.

Obvious applications include finessing vocal parts, but I also found Triple D reasonably effective in reducing the edgy honk of an acoustic guitar recorded with a piezo pickup. It also works well on muddy mixes, if used lightly. To be fair, any capable dynamic EQ or multi-band compressor could be set up to achieve much the same results, but the job is made much easier here by the simplified control set. 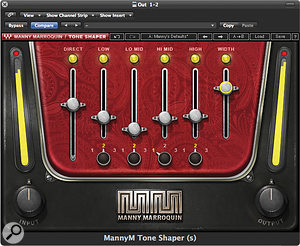 Tone Shaper is another hybrid module, this time combining a four-band parallel compressor with stereo width enhancement. Each band can be muted to allow the process to be evaluated in different parts of the audio spectrum while setting up, and as this is a parallel process, the output from the multi-band compressor is mixed back into the clean signal. Stereo-width augmentation is included to create a more spacious effect. The frequency ranges for each of the four bands can be selected (from a choice of three) using the rotary switch controls below the faders, and the user can control the level of the compressed signal for each band using the faders. A large fader to the left then sets the direct signal level. This plug-in has to be employed with a certain degree of care and restraint, to avoid going overboard with the processing, but, used carefully, it can add a welcome weight to the low end of a mix, and an enhancer-like sparkle to the highs. I found it worked best with the lower-mid fader set at or close to zero, as mixing in compressed lower-mid frequencies can add to the sense of boxiness and congestion. 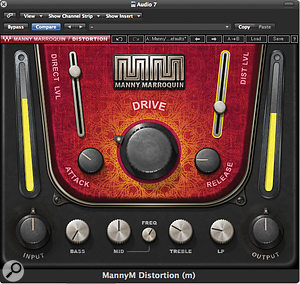 Manny Marroquin makes a lot of use of distortion, often in subtle and mysterious ways, so it's no surprise that one of the plug-ins is dedicated specifically to it. Distortion has a parallel architecture that allows clean and distorted sounds to be mixed, and there's also a useful degree of tonal shaping available via a three-band, swept-mid equaliser and a variable low-pass filter. Unusually, the distortion has attack and release controls to give the distorted component an envelope. Apparently, Manny often uses shaped distortion to add punch to electric pianos and other instruments. My preference was for lower settings of the distortion control, where it adds a warmth and richness to the sound being treated. Higher settings sound very obviously crunchy, although they can work well in adding definition to dull snare drums, for example. Of all the plug-ins, I found this one perhaps the least useful, as I imagine most of us already have various distortion plug-ins and guitar amp simulators that can achieve pretty much the same kind of effect, but it doesn't hurt to have it in the suite for the sake of completeness. 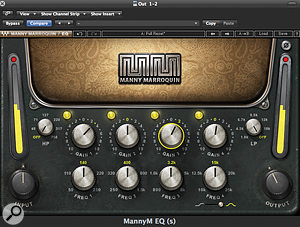 No suite of processors would be complete without equalisation, and this EQ plug-in combines emulations based on aspects of Manny's six favourite equalisers: SSL 9080 XL K high- and low-pass filters plus Quad 8 and Neve 1073 low-end EQ, Quad 8 and Motown low-mid bands, Motown, 1073 or API 550B for mid-range and high-mid frequencies, and his Avalon 2055 for its silky highs. Apparently, the idea was to take what Manny liked best from each of his favourite equalisers and build a kind of dream hybrid equaliser. The result is a four-band, semi-parametric equaliser — each band has a fixed Q setting and a bell/shelf switch is available for the high band — that emulates Manny's favoured type of EQ character for each band. While some may see the fixed Qs as limiting, this equaliser produces great-sounding results, even if you leave all four frequencies to their default centre values, and doesn't create harshness or muddiness even when you apply more EQ than might normally be considered decent — although in most cases you'll find that a little goes a long way.

Having put each plug-in through its paces, I have to say that the Manny Marroquin Collection meets its design brief extremely well. While there's no guarantee that your mixes will sound as slick as Manny's do, at least you'll have the tools at your disposal, and the straightforward layout of these plug-ins not only saves you having to come up with your own complicated effect and processor combinations, but also makes everything much more controllable. There are also lots of supplied presets that serve as excellent starting points for creating your own treatments. I'm not sure why the collection doesn't include a more conventional compressor plug-in, just to complete the processing set, but then most people will have a plug-in that does that particular job well enough already.

I enjoyed using this package, and though it is only one producer's idea of appropriate processing, it lends itself to a useful range of contemporary styles and doesn't demand too much expertise from the user.