Isolating your guitar cabinet allows you to crank up your amp on recording sessions — but without deafening the neighbours! 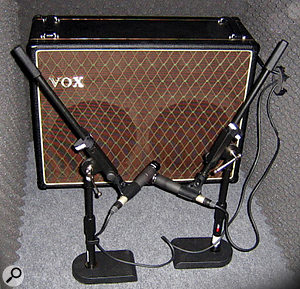 VocalBooth's Amp Box is a portable amplifier enclosure for sonically isolating guitar amps or cabinets so that they can be played at loud enough volumes to create natural-sounding distortion and overdrive. If you live in a shared‑wall apartment or just want to crank up in the same room as your studio setup, an amp enclosure such as this can allow you to capture your favourite tone(s) without breaking your ears — or the terms of your lease!

The Amp Box is basically a cube in which the sides and top are held securely together with Velcro straps in locking housings, or channels machined into a base plate. The base has an insulating foam layer on its bottom, which prevents sound vibration created inside the box travelling into the floor (important if you have a neighbour living below you), or loud sounds entering the box through the floor, as in the case of an adjacent drum kit. The Amp Box has a convoluted, foam‑lined interior, a cable port and enough extra interior space for a mic and stand.

To rid the interior of the heat build-up from an enclosed guitar amp, the standard ventilation consists of an air-intake labyrinth and a short length of five‑inch vent tubing with a fan attached at the end. There's a vent silencer upgrade option if the ventilation system's slight noise is an issue — although it was not in our tests.

The Amp Box's panels are made using ¾‑inch OSB (oriented strand board) and covered in heavy exterior fabric. As an option, you can order additional half‑inch layers of MDF or buy a dual enclosure — basically a box within a box. VocalBooth also make a product called the Speaker Box, which has no ventilation but comes in the same sizes as the Amp Boxes (and at lower prices). 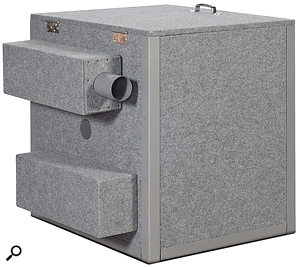 The optional 'exhaust pipes' allow heat from the amp to be removed from the enclosure without compromising the degree of isolation.

I tested the Amp 4040V 'Large Amp Box' at Gary Belz' House Of Blues Studios in Encino, California, along with chief engineer Doug Tyos and guitarist Bill McBee. The Amp Box was placed out in the studio as if during a tracking session, as is usually the situation when this is used at the studio.

We wanted to attenuate the sound level of a Mesa closed‑back, 2x12 cabinet powered by a Mesa Electra Dyne head. The Mesa cab was a tight fit, and when the box was closed the sound level reduced to about the same as if you were standing next to the bare amp wearing form-fit ear plugs — that's to say, a lot! Mid‑range frequency SPL reductions are stated as: at 1kHz, 36dB; at 2kHz, 40dB; and at 4kHz, 42dB of attenuation.

We recorded a 'crunch' rhythm-guitar part in three ways: with the front and top panels of the Amp Box off (essentially not using it); with the Amp Box closed up and the speaker cab inside facing straight at the inside wall of the front panel; and then with the cabinet rotated, angled 45 degrees from the front panel.

We were careful to be consistent with the same guitar and amp settings, the same guitar part and performance, and the same SM57 mic placement and distance (it was placed one inch from the grille cloth, halfway between the speaker's dust cone and the surround suspension and angled toward the centre). We did all the tests twice, to prevent any slight inconsistencies that might have crept in colouring our opinion.

The results seemed counter‑intuitive. When the cab was aimed at a 45‑degree angle from the front panel, the sound was closest to the sound of the amp without the Amp Box, whereas firing straight into the front panel produced a pleasant bass build‑up. If you like the sound of the amp, mic and guitar combination without using the Amp Box, you should aim at the 45‑degree; and if you want a thicker sound, aim straight into the front.

In general, the guitar sound is close, present and great for clean and tight rhythm, or compact crunch parts. Because the mics are close, and considering the small space surrounding the cabinet, there's no room ambience mixing with the direct sound into the mic. Creating the sounds associated with soaring and heroic lead guitar solos may depend more on stomp pedal effects, or on processing during the mix.

Another possible use in the studio is to use the Amp Box as a 'tunnel' for recording a kick drum, where an additional mic is placed two feet in front of the kick's front head and you need to isolate the kick from the rest of the kit, or the rest of the band. Simply aim the kick (and rest of kit) into the Amp Box and close it up. Perhaps an alternative front panel with a 22‑inch-diameter hole would make a nice option for recording drums with the Amp Box? 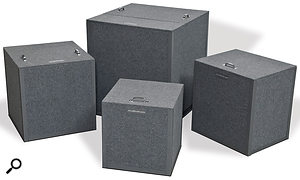 Unfortunately, as these are currently shipped from the US on a per-order basis, the £945 shipping cost may prove prohibitively high in the UK. However, tThe difference in sound when using the Amp Box is minimal, making it a good solution to a common problem, especially if you are searching for a tight and close-sounding amp sound, or if outside noise is polluting your guitar amp's sound when miking.

There are four sizes of Amp Box:

Sizes are given in inches, and listed in order of height, width and depth. The small and medium boxes have hinged lids, and the larger ones removable lids. Other options comprise a hinged side-door, castors, different interior Auralex foam, and exterior colour choices.

The VB Amp Box is a well‑built system to control loud sound. Something like this is a necessity for maintaining civility while you play 'rowdy'!