Warm Audio’s assault on the vintage mic market continues with this impressive take on an Austrian classic.

Since their first release in 2011, Warm Audio have gone from a ‘man in a garage’ operation to an established name in the pro audio world, producing microphones and other studio kit. As a studio owner and regular reviewer of their gear for SOS, It’s been fascinating to observe their development from industry feather‑rufflers to a major brand. It took them a while to win over a self‑confessed gear snob like me, but the last few Warm Audio microphones I’ve reviewed have been nothing short of excellent. Not only do they get impressively close to the sound of their inspirations, but they’re high‑quality studio mics in their own right. In my last Warm review, I wondered whether they might be close to running out of fantasy mics to mimic, but then I opened the box that arrived at my studio for this review and realised that of course there is still at least one big hitter left... 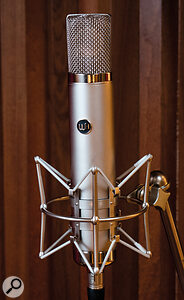 Originally in production from 1953‑1960, the AKG C12 is a large‑diaphragm valve capacitor mic offering no fewer than nine different polar patterns courtesy of a switch on the power supply. It used their original ‘brass ring’ CK12 capsule, regarded by many as being one of the finest ever built, and it’s a testament to its enduring success that the C12 is still regularly referenced in new designs nearly 70 years after it was first released. Like many of the legendary vintage mics that now cost a frankly ridiculous amount of money on the secondhand market, the C12 was originally seen as a high‑quality workhorse microphone that would be used on a variety of sources, not a rarified investment piece that you got out only for special occasions. Abbey Road engineers, for example, were happy to use the C12 in front of most sources, and Geoff Emerick notably employed one to record Paul McCartney’s bass for Sgt. Pepper, with the mic positioned four or five feet away from the cab. Although known for its all‑rounder ability, the C12 is perhaps most associated with having a brighter, ‘present’ sound that works well with female singers in particular and for generally being adept at capturing a full‑range, lifelike recording of any instrument.

The WA‑CX12 ships in a solid‑looking tweed case, with all the components neatly housed in a velvet‑style lined interior. It’s been noticeable with recent Warm Audio mic releases that the company are taking much more care over accessories such as mounts, cables and cases. Rightly so, because although these products could be considered bargains compared with the originals, they still represent a significant investment for a home recordist or small studio owner.

The WA‑CX12 is an impressively large and serious‑looking microphone, and I immediately liked how minimal it looks with its large brushed‑metal housing and authentic‑looking capsule basket. The power supply is a no‑frills box that houses the polar pattern selector; as on the original, this offers two intermediate positions between the cardioid, figure‑8 and omni polar patterns, providing a total of nine options.

In recent press materials, Warm Audio have described something called the ‘Warm Formula’, which seems to be about identifying the key components that are responsible for the sound of a particular product, and then ordering them on a large enough scale to bring the price into the desired range. In this case, it means combining their choice of capsule — which, like that of the C12, is edge‑terminated — with quality components such as a hand‑selected 12AY7 tube and a large‑core TAB‑Funkenwerk USA output transformer. Described in this formulaic way, the process might might sound a little simplistic, but of course the technical expertise required to recreate these old designs also needs to be paired with the ears and judgement to know when the combination of components is right.

My first studio tests with the WA‑CX12 were with a female singer who was recording some demos of new material. She was singing and playing acoustic guitar at the same time, and one of my favourite techniques for this scenario is to use two mics in figure‑8: one pointing towards the singer’s mouth, with the other towards the guitar. The idea is that by directing the deep ‘null’ from the side of the figure‑8 pattern towards the source you want to reject, you can achieve very good isolation from the voice or guitar. The WA‑CX12 worked superbly on my singer’s voice in this setting: not only did it provide excellent separation from the guitar, it also captured a lovely ‘present’ representation of her voice that had no sense of harshness or excessive sibilance. Later on, in the same session, we recorded some vocal overdubs in a more conventional setting with the singer standing in front of the mic, in its cardioid polar setting. Again, I was very impressed with the results: bright, present and with a balanced lifelike quality that would be mix‑ready without needing any EQ.

It was similarly impressive on male vocals, and in addition to that presence, the mic brought a lovely sense of authority to the low end of a baritone vocal. What also struck me on these vocal sessions was how comfortably the mic coped with sudden changes in dynamics. High‑quality valve mics can have an almost compressed sound when pushed slightly, and on at least one occasion when tracking I found myself double‑checking I hadn’t accidentally engaged a piece of outboard that might have been colouring the sound in a positive way.

As well as vocals, I used the WA‑CX12 on a few different acoustic guitars, and it worked perfectly for capturing the detail of a quieter picked part whilst doing a solid job of keeping louder parts in check. Finally, in a nod to Sgt. Pepper, I positioned the mic about five feet away from a monstrously loud bass cabinet on a bass overdub session. This seemed a bit excessive at the time, but it ended up being a key part of the bass sound, providing a full, lifelike quality to the bass parts to the point where you could hear the grille on the bass cabinet rattling in a way that felt real and engaging.

I was very impressed with the results: bright, present and with a balanced lifelike quality that would be mix‑ready without needing any EQ.

To put it simply, for a sub‑£$1000 mic, the WA‑CX12 is an exceptional‑sounding microphone. I didn’t have an original C12 to audition it against for a direct comparison, but it fitted very well with my perception and experience of what that style of mic can sound like. More important to me, though, was its ability to produce balanced results in a variety of recording situations. If you work with female vocals in particular, but also want a high‑quality all‑rounder for your studio, then you should feel confident giving this mic a try. In what is now a common theme for my reviews of Warm Audio’s recent releases, I’m a ‘doubter turned believer’, and the formula they have worked on has seemingly been refined enough now that they’re turning out some seriously impressive microphones for equally impressive prices.

I've supplied a few audio examples to give you an idea of the sound of the mic in a range of studio applications. In particular, I've included a few female vocal examples as it is one of the uses that people associate the original C12 with as excelling at. Thank you to Kerry from the band Keltrix (https://keltrix.uk)  for kindly helping me with these.

Download the hi-res WAV files in the ZIP, or check out the MP3s in the Soundcloud player.

For all the recordings, I used the relatively neutral sounding preamps on my Audient ASP24 mixing desk with no additional processing.

This is how the WA-CX12 sounded on my vocalist Kerry, singing a softer sounding vocal.

This is the same singer singing a much louder part.

I also used the WA-CX12 to capture Kerry's voice as she played her acoustic guitar at the same time. By pointing the side nulls of the figure-8 polar pattern at the guitar, I got an impressive amount of isolation.

How the WA-CX12 fared on a male vocal

For this test I used the WA-CX12 in its cardioid polar pattern about six inches away from an acoustic guitar, pointing toward the 4-5th fret.

In a nod to a famous use of the AKG C-12, recording the bass for the Beatles' Sgt Pepper album, here's how the WA-CX12 sounded five feet away from a loud bass cab. The mic was in its figure-8 polar pattern.

Warm Audio’s take on the classic AKG C12 delivers the goods, and for a very reasonable price.