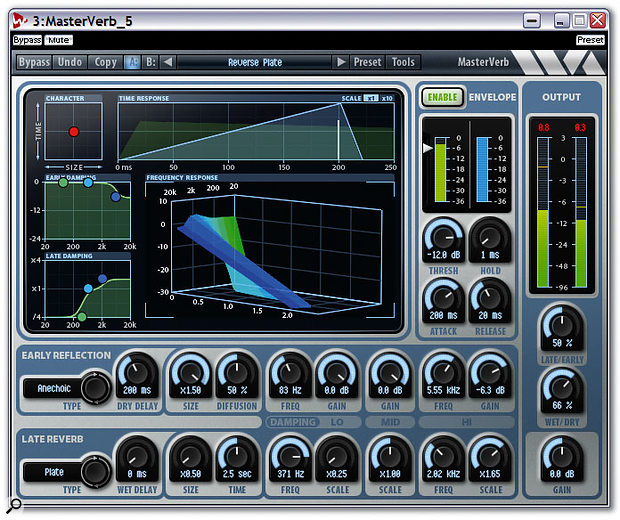 Although most major MIDI + Audio sequencing applications include bundled EQ, dynamics and reverb plug-ins, they don't always sound too great, so many users are on the lookout for alternatives, like these two from Wave Arts.

Wave Arts' first product was the impressive Masterverb DX, which I reviewed back in SOS February 2002, commenting on its smooth sound and low CPU overhead, and Mac/PC VST versions have since appeared. Their second is Trackplug, which combines EQ, compression and gating into one handy plug-in. The new Power Couple is a bundle containing both plug-ins at a reduced price.

Masterverb is now up to version 3.03, so here's a quick update on what's new. The most obvious improvements are the more refined graphics and stereo peak-reading output level meters, but the engine has also been enhanced with an additional Diffusion control. A 50 percent value gives identical results to previous releases, while lower values provide more discrete early reflections, and 100 percent gives an extremely smooth build-up. The Decay Time can now be extended to 60 seconds for special effects. The sound is still as smooth as silky as ever, the CPU overhead remains just as low (about 3 percent of my Pentium III 1GHz at 44.1kHz), but the new features definitely provide more versatility and polish.

Trackplug is supplied in both stereo in/out and mono in/out versions, and combines a 64-bit EQ with up to 10 click-and-draggable bands in its graphic window, and a comprehensively featured 32-bit compressor/gate. Each EQ band can be high-pass or low-pass, high-shelf or low-shelf (all with fixed slopes), band-pass or notch with variable bandwidth, or fully parametric. Even better, the EQ can be placed pre- or post-dynamics, and it's incredibly easy to use — just click and drag an existing point to change frequency or gain, shift-click to adjust bandwidth where applicable, and double-click to add more points. Knobs and buttons are also available for most functions if you prefer, and it sounds sweet, even at extreme settings.

The compressor/gate section starts with a common Peak/RMS detector for greater efficiency, along with an optional 1ms, 2ms or 5ms look-ahead delay to help catch transients. Next in the chain is the gate, and finally the compressor, each with its own Enable button. If either of these is active the input meter displays both minimum and maximum signal power, so you can monitor dynamic range. Each also has its own meter, displaying both minimum and maximum amounts of compression and gating using different colours. Taken together, the three meters show a surprising amount of useful information.

Both compressor and gate have their own Threshold, Ratio, Attack and Release controls, along with a selection of soft, medium and hard knee shapes, while there's also a Dynamics Input Gain for the incoming signal, and a manual make-up gain for the compressor, which can also be used in conjunction with the Auto Make-up Gain button to make level adjustments easier. Like the EQ, the dynamics section has its own graphic display with draggable points for compressor gain, along with both thresholds and ratios. At the end of the chain there's a further Output Gain control with a ±24dB range, and finally a stereo pair of peak-reading output level meters.

Trackplug provided smooth and transparent results with all the sounds I threw at it, including vocals, solo instruments, drum kits and complete mixes, and is far quicker and easier to set up and use than patching in separate plug-ins. It helps that 47 presets are included, ranging from suggested starting points for various instruments and styles through to extreme treatments, along with a range of useful EQ settings including noise filtering and special transformations like resonant comb filtering.

Like Masterverb, Trackplug is very economical with CPU, and with my Pentium III 1GHz took just 1 percent with both compressor and gate in circuit, and about 0.3 percent for each EQ band. With all 10 bands, gate, and compressor activated, the grand total came to just 4 percent for the stereo version, and 2 percent for the mono one. These figures are low enough to mean you can patch Trackplug into patch into plenty of channels without worrying. It sounds great, is extremely flexible, and together with Masterverb makes the perfect Power Couple.