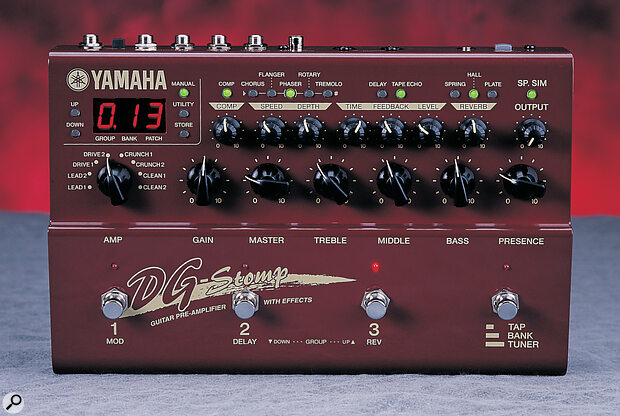 Based on the technology pioneered in their DG1000 digital guitar processor, the Yamaha DG Stomp is a modelling‑based digital guitar preamp that is priced to compete head‑on with the Line 6 Pod and the Johnson J Station. However, the design philosophy of the DG Stomp is slightly different to that of its two closest rivals insomuch as it's built from traditional folded sheet steel rather than packaged in a fashionable moulding, and it has more dedicated controls — not only seven knobs dedicated exclusively to the effects section, but also four footswitches which may be used either for patch selection or to engage individual effects — live performers should note that the footswitch controllers for the other preamps mentioned come as optional extras. 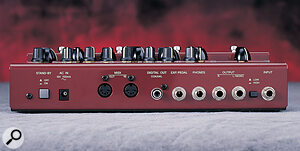 In addition to its signal input and output jacks, the DG Stomp sports an expression‑pedal input, an S/PDIF digital output, and a pair of MIDI sockets.

The DG Stomp's control section is recessed and all its connectors are located on the rear panel. Sadly, the external power supply is no tougher than those of its rivals and comes with a woefully short cable, meaning that you're always going to have to play within a metre or so of a plugboard! It has stereo outputs, a high/low input gain selector for matching your guitar's output, MIDI In and Out connectors and an S/PDIF digital output (48kHz only) on a phono connector. The DG Stomp has impressive 20‑bit converters and electronics so quiet that the designers didn't even bother to include a noise gate! A headphone jack is fitted for private practice use and an optional expression pedal may be used to control one of the internal parameters, such as the wah‑wah frequency. A three‑digit LED display shows the patch, group and bank number or the value of any parameter being edited.

As with other modelling preamps, the unit offers a number of guitar amp emulations that can be combined with virtual speaker cabinets of various configurations and a selection of onboard effects. You can choose one modulation effect (Chorus, Flanger, Phaser, Rotary or Tremolo) and combine that with Compression, Reverb and Delay. Reverb modes include plate, hall and spring, whereas the Delay processor can operate as a straight delay or as a warmer‑sounding tape delay emulation. There is a function to use the fourth footswitch as a Tap button for setting up delay times easily. Each of the effects have associated control knobs for their most commonly‑used parameters, though most of them have additional parameters available that can be accessed by holding down the effect button.

Controlling the main amp model is a Gain control, a traditional three‑band equaliser and a separate Presence control, plus an output gain knob. An eight‑position selector switch accesses the amp models, which are fairly generic offering two Leads, two Drives, two Crunches and two Clean channels. In combination with the 16 speaker models (4x12s down to 2x10s and 1x12s), this covers most bases fairly effectively. Again, the speaker cabs aren't based on certain models but on generic American, British and Yamaha configurations.

The choice of speaker simulator (or bypass) is saved with the patch, and the DG Stomp makes generous provision for 90 user patches as well as providing 90 factory patches. Because of the limited number of switches, the patches are arranged in ten groups of nine, each group being further divided into three banks of three patches each. Groups, banks and patches in either User or Preset areas can be selected either from the Up and Down buttons by the display or through sequences of footswitch presses.

Because the DG Stomp doesn't have the motorized knobs of the DG1000, when you change patch the knobs won't represent the true state of the controls — something that newcomers to digital control systems are sometimes confused by. When you adjust a control, it has no effect until it passes through the position corresponding to the stored parameter value. However, there is a Manual mode available, which forces all parameter values to those shown by the physical positions of the controls.

Global parameters are set up via the Utility button. It's possible to switch the speaker simulator on or off globally, overriding this setting for all individual patches. It's also possible to set one of the two Clean models to act as a preamp bypass position, making it possible to access the effects without the amp simulator. Another setting allows the footswitches to be used to individually bypass the delay, reverb and modulation effects, instead of performing their usual patch‑selection duties.

The DG Stomp transmits MIDI Control Change messages when the footswitches are operated. In fact, the MIDI implementation of this unit is quite advanced, and includes the ability to create MIDI Program Change transmit and receive tables and to merge incoming MIDI data with that generated by the DG Stomp. This could be very useful to the live player who uses a lot of MIDI‑controlled equipment in his rig, as it would enable one patch‑change event to set up several pieces of equipment simultaneously.

Finally, there is also a built‑in tuner, accessed by pressing and holding the fourth footswitch for a couple of seconds. In the tuner mode, the illuminated buttons in the modulation section double as 'too high', 'too low', and 'just right' indicators.

Both lead sounds are fairly heavy with plenty of available overdrive and Lead 2 has the familiar 'scooped' mid‑range associated with Marshall amps. Drive is still fairly assertive, while Crunch is less overdriven and no ticeably grittier. Of the two Clean options, Clean 1 is the most neutral while Clean 2 can be driven to sound slightly more ragged and also sounds more coloured.

Though amp models are never as dynamic as real tube amps, here you get a reasonable degree of touch sensitivity and the less distorted sounds are reasonably responsive to picking intensity, making it possible to create blues tones as well as heavy rock sounds. Though there isn't the range of different sounds you get with a Pod or a J Station, the overall sound quality and playability is comparable and I didn't miss the extra options.

As with other digitally modelled guitar preamps, I found the clean sounds were the weakest part of the package. Though sound is always subjective, I'd say the clean sounds are comparable with the Pod but not as good as the J Station. Normally a lifeless clean sound can be perked up a bit by using compression, but I found the compressor tended to overemphasise the attack of the note, while 'jumping on it' after this, making it sound duller rather than adding sustain. Fortunately, the other effects fared much better, especially the very competent modulation section. The rotary effect is particularly nice and, though not absolutely authentic, it's very musical. The delay and tape echo effects also work nicely, particularly when sync'ed to tempo using the Tap switch.

I found the reverbs (which are all stereo) effective for guitar use, even though you can only control the level, not the decay time. There's enough of a tonal difference between the hall, spring and plate settings and, unless you're switching to a patch with a different type of reverb programmed into it, the reverb hangs over nicely as you change patches.

As a live performance tool, the DG Stomp is rather better value than its rivals, as it provides foot control as standard, though the flimsy PSU works against it in this respect. The quality of the overdrive sounds should satisfy most players and, in the studio, the speaker simulators work well in producing very convincing rock overdrive sounds and acceptable in‑between blues tones. The low background noise is also laudable — you can create all types of guitar sound without battling against hiss, though extreme overdrive settings inevitably introduce some noise, just as a real amp would. I like the ability to use a regular expression pedal with the unit and also appreciate the number of dedicated controls in the effects section, as it makes setting up the effects very fast and unambiguous. While not perfect in every respect, the Yamaha DG Stomp works well both live and in the studio and represents very good value.

The DG Stomp is a cost‑effective all‑purpose guitar preamp that does not need an optional foot controller for stage use. It compares well against the competition and is very quiet.