Zero-G | Beats From The East Skip to main content

Zero-G | Beats From The East

As a title, Beats From The East is slightly misleading, as this library's real focus is on delivering Western-style commercial loops for hip-hop, R&B, crunk, trance, techno and house tracks. The twist is that the loops incorporate drum and percussion sounds from South and East Asia. Notable examples include tabla, dholak, kanjira, ghatam, yak bera, geta bera, thammattama, udakki and raban, most of which appear as part of ensemble mixes alongside more generic electronic drum and percussion sounds derived from instruments such as Roland's TR808 and 909. The collection was created by Eranga Jayawansa, a producer based in Sri Lanka who has previously worked as a DJ, sound engineer and sound designer. Apparently, Jayawansa took seven years to compile the 1150-plus loops, which add up to 2.5 gigabytes of content. 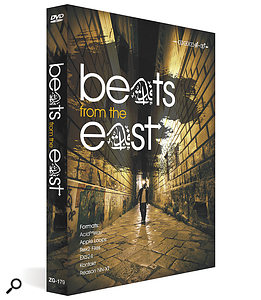 Unlike so many modern sample collections, Beats From The East does not use the Construction Kit method of organising its files. The loops are pretty much all independent of one another and clearly not designed to fit together to form compositions, although where Jayawansa has provided several variations on a theme, it would be possible to use them in such a way.

It has to be said that the categorisation of the material is a little random, and possibly indicates that this is very much how Jayawansa had things arranged on his hard drive. There are just nine folders, entitled Dance, Ethnic Fusion, Hats n FX, HipHop, Others, Pop Rock Etc, RnB, Six Eight and Variations Etc, and within each one is a very long list of samples. The only way to truly get to grips with the content is to trawl through the folders systematically, making notes along the way.

Jayawansa says that, for him, the hip-hop and R&B collections are the highlight of the library. The material in these folders is his most recent work and the loops are specifically equalised and mixed to suit contemporary commercial projects. For me, though, the most interesting and exciting material is found in the Ethnic Fusion collection, which seems to make more extensive and experimental use of sounds 'from the East'. The Six Eight folder is also an interesting one — its title giving a clue as to the nature of the time signatures of its constituent loops — and there are further variations on Western and Eastern sounds and rhythm combinations throughout the 'Variations Etc' and 'Others' folders.

What this library lacks, however, is a folder of single hits and loops of just one instrument playing. Instead, pretty much everything is mixed, and therefore fairly limited in its potential uses. This is a shame, because Jayawansa clearly went to some trouble recording his traditional Asian instruments and must have the discrete tracks on disk somewhere. As it stands, the library doesn't work as a sample toolkit, only as a collection of loops with an Eastern flavour. Nevertheless, jobbing composers are sure to find it a plentiful source of inspirational material. Tom Flint