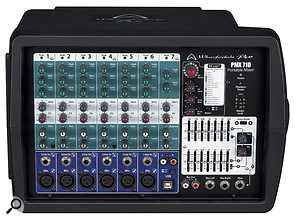 The PMX range of powered mixers from Wharfedale Pro is designed to provide a single-box solution for mixing and amplification, wherever portability is a key requirement. The original two models were the PMX500, which has five input channels and a mono 150W RMS power amp, and the PMX700, which offers seven channels and a stereo 150W RMS per-channel output. These have just been joined by the new PMX710, which features a significantly more powerful amplifier and a two-way USB interface.

The PMX710 is a one-box mixer with an integral Class-D power amplifier, also incorporating an on-board digital effects processor and a twin graphic equaliser. Small-format amplifier-mixers come in two basic configurations: the flat, mixing-board style, like a 'passive' traditional desk, and the box type with all the mix controls on the vertical front panel, and often designed to be optionally mounted in a rack. The PMX710 is one of the latter types, although its compact and chunky shape is intended for carrying around as a self-contained unit.

The PMX710 has six mono channels that are equipped with balanced XLR and TRS inputs for either microphone- or line-level sources. The XLR inputs have globally-switched 48V phantom power available: the switch is on the rear panel and there's an associated indicator LED on the front. The phantom switch itself is next to the main power switch, and follows the common convention of being made slightly thinner so you can feel the difference between the two if you can't see them. On some mixers, accidentally switching the phantom power on or off with the system up and running produces a nasty noise at the output, but the PMX710 doesn't suffer from this.

The line-input connector accepts balanced or unbalanced jacks, and is intended to be used instead of the XLR input. I did notice, though, that inserting a jack doesn't cut off the mic input, so the two will actually work at the same time. I do like the fact that the XLR input is at the bottom of the front panel and the jack above it. It's a minor point, but as jacks are generally smaller than XLR plugs it keeps all the inputs visible at a glance, and looks neater and more organised than the opposite arrangement.

Each input channel strip has a rotary level control for trimming incoming signals, although there is no input monitoring (PFL) function to assist with this. There is, however, a red 'peak' LED at the top of the strip, which warns of overload. Note that this monitors the signal after the pre-amp and EQ section, and is looking at what's coming out of the strip rather than what's going in. As the PMX710 is a stereo device there's a pan control, and on a different coloured background there are two auxiliary sends. One of these is for the monitor mix and one for the internal effects bus. Completing the channel is an equaliser section that gives three adjustment bands based on frequencies of 100Hz, 2kHz and 12kHz. It's not a comprehensive EQ, but enough to do the basics, and there's a graphic equaliser in the master section.

True to its name, the PMX710 has a seventh channel, which accepts a stereo source using either a pair of unbalanced RCA phono connectors or a USB input. In this case, the input is switched to one or the other. Channel seven has all the same sends as the mono channels, but it has a simpler, two-band EQ section.

The master section is clearly and neatly laid out, and has two master level controls: one each for main and monitor mixes. There are also twin seven-band graphic equalisers, which can be configured to operate in two different modes. There's a slide switch that selects option 'A' or 'B', where 'A' routes the main left and right buses through the two graphic EQ processors, giving independent EQ control to each. This is useful if the loudspeakers are in different parts of a venue, such as can be the case with outdoor events or building lobbies.

When option 'B' is chosen, both left and right main signals are controlled by the lower set of graphic EQ controls, and the monitor mix is passed through the top set. I think this would tend to be my preferred option, as live monitors usually need a different overall EQ than the main mix, especially since the PMX710 doesn't have low-cut filters on the input channels. Either way, it's a useful piece of extra flexibility that makes the best of the resources available in what is, after all, a very compact unit.

The PMX710 incorporates a digital processor that provides a total of 16 preset effects. The effects are dialled up with a rotary selector: there are no fancy LEDs here, and it's quite difficult to read the small numbers around the knob, although the full index is printed alongside. The effects library includes eight reverbs (two hall, three room, three plate), a couple of choruses and delays, and even a vocal canceller, which presumably would be applied to the stereo input at party time. No user adjustment of any parameters is possible, but the essentials are all covered by the presets.

I quite liked the plate reverbs, and tapping a mic with my thumb in conjunction with lots of bass boost and the 'Hall 1' effect sounded uncannily like a full-size concert bass drum! Completing the master section, the main stereo and monitor-bus mixes can be taken from line-level front panel jacks, while a pair of phono outputs provides a recording tap of the main stereo mix, which is also sent to the USB port, for recordings to be made from there.

The PMX710 has the most powerful amp section in the PMX range, and at 250W RMS into 4Ω a channel, it's able to stand its ground against the competition in its price range: when comparing similar products, it's worth noting that Wharfedale do quote RMS power, not 'programme' or even peak-power ratings. Personally, I tend to be impressed by the sound level something actually produces rather than a big label on the front, though Wharfedale could probably get away with calling this a 2kW amp if they wanted to.

The overall result will depend on a number of factors, such as the efficiency and quality of the loudspeakers, the venue, and, of course, what you feed into the system. I ran the PMX710 up fairly loud using two sets of speakers, and it's got more than enough power for solo performers and ensembles, village halls, churches and modest outdoor events. The Class-D switching amp module is very light and efficient, and the heat-sink fins don't get particularly warm in use.

In conclusion, it's important to focus on what the PMX710 is really all about, which is extreme portability. The enclosure is made from moulded plastic and weighs only 5.7kg, which is a one-finger lift. The large integral handle (which is part of the moulding, not a separate fitting) is comfortable to use, and everything you need apart from a source and a speaker is within the box. 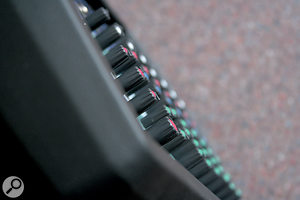 The PMX710's controls protrude a little from the front of the box, so it's best to take care when transporting it.

I did notice that the front-panel controls protrude beyond the edge of the casing, and look a bit vulnerable to accidental damage: if the panel could be recessed by 5mm more it would provide a bit of extra protection. There isn't much more to say about the PMX710, though. It does what it's supposed to do, and it does it without fuss. It's utterly straightforward to use, provided you get your 'A' and 'B' options sorted out, and it's well-mannered too, with only a subdued click when the power is cycled.

I would describe the PMX710 as a practical, flexible and highly portable mixer-amp, which has enough inputs and ample output power to make it an interesting proposition for small-scale live sound requirements.

Viable alternatives to the PMX710 mixer amplifier include the Phonic Powerpod 1062 Plus, Samson XML410, Yamaha EMX312SC and Mackie PPM608.

The PMX710 is a practical, flexible and highly-portable mixer and amp. It has plenty of inputs, built-in effects and a decent amount of amplifier power, making it well worth considering for small-scale live sound requirements.