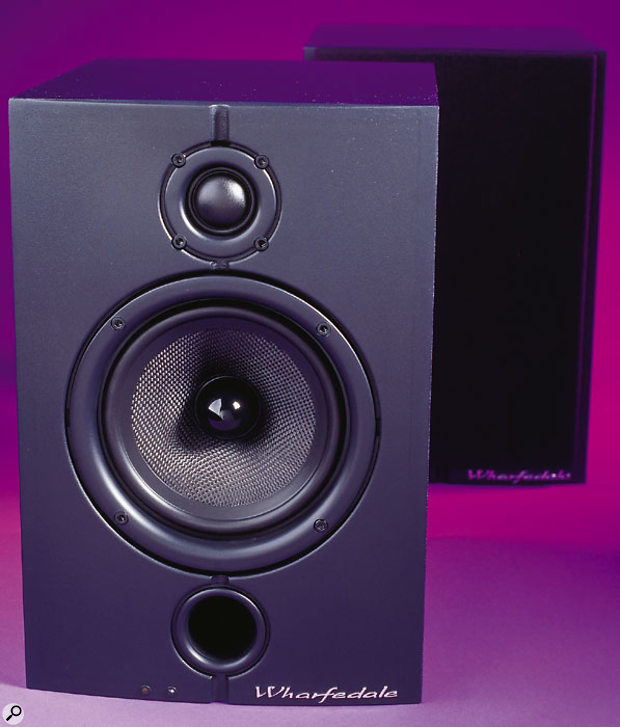 Wharfedale's Diamond brand has been associated with a range of high-quality but affordable domestic and home-studio speakers, going back the best part of 20 years. The most recent in this long line are the 8.1 Pro and 8.2 Pro models, available in both active and passive versions. The larger 8.2 Pro has a 6.5-inch bass/mid-range driver and claims a few extra Hertz of useful bass response, whereas the 8.1 Pro Active model reviewed here is slightly smaller, employing a five-inch bass/mid-range driver along with the ubiquitous one-inch soft-dome tweeter.

The Diamond 8.1 Pro Active model reviewed here is a compact two-way, active nearfield monitor, intended for small home studios and the like. The speakers can be used as a conventional stereo pair, or extended to form a nearfield 5.1 monitoring system complete with an optional matching subwoofer which includes bass management facilities. The active version is physically slightly deeper than the passive model to accommodate the amplifier chassis, and its very solid and well-damped cabinet measures 295 x 198 x 280mm (hwd), including the rear-panel heat sink. It is made from MDF and covered in an Iridium-coloured laminate which gives a shiny, mottled-grey finish. The front baffle appears to be a composite-loaded plastic material with a matt-black finish, and it is slightly convex — presumably to aid dispersion.

The two drivers are mounted vertically above one another in the centre of the baffle, with a 1.5-inch circular port at the bottom extending some 4.5 inches into the cabinet. A pair of LEDs at the bottom of the front baffle indicate power and amplifier clipping. The bass/mid-range driver is a little unusual in that its cone is made from a 'bi-directional Kevlar weave', and it has a phase-plug cone at the centre which is intended to improve the off-axis performance and thus the stereo imaging. The voice coil is double wound and vented to ensure reliable high-power handling.

The tweeter is a fairly conventional one-inch soft dome with ferrofluid cooling and a neodymium magnet, although it sits well inside a recessed chassis. The monitor is magnetically shielded to allow use close to TV and computer CRT screens. Although the 8.1 Pro Active is a fine looker au naturel, it is supplied with a removable cloth grille supported on a plastic frame. However, this doesn't appear to be very robust — especially the retaining clips — so best to either remove it and pack it away safely for when you come to sell the monitors, or leave it firmly in place and not fiddle!

The rear panel carries the amplifier chassis, housed in a divided section at the back of the cabinet. At the top of the panel is a large finned heat sink, with the audio connectors and controls below. Both balanced (on combi jack/XLR) and unbalanced (on phono) inputs can be accommodated, the two effectively being wired in parallel, and there is a centre-detented volume knob and bass filter switch. The nominal input level is 0dBu, and the bass-cut switch introduces a 6dB/octave high-pass filter, reducing the output bass level gradually from 400Hz. This is intended to knock the level of low frequencies down in compensation for the natural bass boost that occurs when monitors are placed close to walls. At the bottom of the panel is the IEC mains inlet with integral fuse holder, and a power switch. There is no provision to change the mains input voltage.

The amplifier electronics are very compact and relatively simple. The active crossover stage operates at 2kHz and is built around a couple of the ubiquitous TL072 op amps. This crossover is set to operate at a slightly lower frequency than the passive version (which is set at 2.2kHz), and amongst other things this is claimed to improve the stereo imaging slightly in comparison to the passive model. The power amplification is provided by a pair of TDA7294 chip amps, and the ratings are given as 60W for the bass/mid-range driver and 40W for the tweeter. A distortion figure of 0.1 percent is specified at 50W output, and the speaker can deliver a peak SPL of 106dB at one metre. The specifications also claim a usable bandwidth of 50Hz-24kHz. 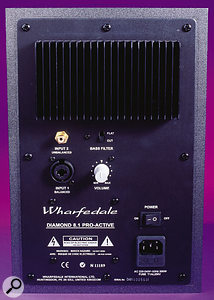 The Diamond 8.1 Pro Actives are very straightforward to set up, thanks to the flexible connections and lack of EQ frills. I used the balanced inputs via TRS cables, as the rest of my monitoring chain is entirely balanced. The rear-panel volume control ranges from silence when fully counterclockwise, through to the nominal 0dBu sensitivity at the centre detent, and on to give additional gain as it is rotated further clockwise. The operating range is such that I can't foresee any situation that would present difficulties in finding a workable volume setting, regardless of the monitoring signal source.

With my equipment, the centre detent position seemed to be the ideal setting for the kind of moderate listening level I tend to work with, and it made matching left and right gain controls very easy. I left the bass switches in their flat positions, as the monitors were supported on Atacama stands roughly 0.5m away from the rear wall and about 1m from the side walls in a nearfield environment. I tried a brief experiment with the speakers backed up to the rear wall, and found that the bass-cut facility was pretty well judged, restoring the level and extension of bass fairly well back to its freefield character.

As I sat down to listen, my first impressions were very favourable indeed. There aren't many active monitors at this price that sound inherently 'right' from the off. As is my normal practice when reviewing monitors, I worked my way through my own test disc of familiar material, starting with some well-recorded male speech. This is actually a very demanding test for loudspeakers and often shows up subtle colorations and distortions that can be missed with musical tracks.

The limited bass response of the 8.1 Pro Active was immediately evident, but the bottom end fell away fairly smoothly and gently, without the over-emphasised hump that so many ported speakers seem to suffer. I felt there was a bit of an upper-mid-range 'bloom' around 400Hz, which made the monitors sound slightly warm and 'likeable', and another small peak around 1.5 kHz which made the sound a little bit forward — a hint of a 'shouty' quality perhaps. The high end seemed to tail off very gently over the top octave or so, which produced a sound that was very easy to listen to.

The speaker handles dynamics and transients pretty well, although it can start to sound noticeably hard and glassy when the listening levels are raised. It may be technically possible to produce the specified peak level of 106dB, but I don't think you would enjoy working at such levels with these monitors — not that many comparably sized monitors would cope significantly better, to be fair. However, working at moderate levels in a nearfield situation, the 8.1 Pro Active is capable of generating a usably clean output at levels to satisfy all but the most crazed of heavy rockers.

Stereo imaging is good too, with stable spatial information over a reasonably wide sweet spot. On good coincident-pair recordings made in nice acoustics I didn't feel the sense of perspective and depth was portrayed as well as I know it can be from more expensive monitors, but it was a fair performance given the price, and certainly up to the standards of the immediate competition.

The overall sound quality is fairly neutral, but I'd say these speakers tend towards the pleasant rather than the revealing — although that's probably not surprising given their domestic hi-fi heritage. Technical faults don't scream out at you as they do on high-end professional monitors, and it is hard work trying to listen into the inner details of a complex mix. However, the trial mixes I produced with the 8.1 Pro Actives seemed to travel well to other systems without any surprises, and I was pleased to find that the bottom end, while not extensive, was sufficiently neutral and informative to enable the balance between basses and kick drums to be judged reliably. However, I did find it necessary to reference a lot of commercial material before I felt completely happy that I could interpret what I was hearing with confidence.

At the recommended UK price, the Wharfedale Pro Diamond 8.1 Pro Actives represent good value for money, and would make a workable nearfield monitor for anyone on a limited budget, although I feel that more informative active designs are available for not much more outlay — it would be well worth auditioning these Wharfedales alongside classic favourites such as the Alesis M1 Active MkII, for example.

Very much a beginner's monitor, but one which is workable and represents good value for money.