Whether you're looking for a compact stage monitor or a boost for a small PA, this active speaker could help. 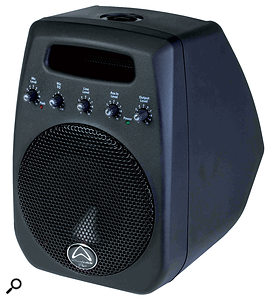 Wharfedale's WPM1 is a compact personal monitor of the kind that's especially useful for live vocalists. This extremely compact device includes a five‑inch, full‑range speaker as well as on‑board processing, EQ and amplification. It also has a built‑in mic preamplifier (albeit without phantom power), so the vocal mic feeds into the monitor first, then to the front‑of‑house mixer, allowing for effect‑free vocal monitoring.

The WPM1 has a metal frame within its small moulded ABS plastic case (measuring 330mm x 315mm x 285mm), and is made using the same gas-moulding process as Wharfedale's larger Titan cabinets. The driver is protected by a tough metal grille, above which is a selection of controls, including level pots for the three inputs, one for the main output, and a mic EQ control. A red LED adjacent to the mic gain control indicates if the gain is set high enough to risk clipping. All the connection sockets are on the rear, including an IEC mains inlet.

Above the front-panel controls is a port that, as well as improving low‑end output, serves as a convenient means of picking up the speaker one‑handed. The WPM1 can be stand mounted using a moulded socket in the bottom for the included mic-stand mounting post, or a second socket in the angled section of the case that's suitable for a boom stand. A further socket at the top allows the top half of a boom stand to be mounted, and all the necessary adaptors are included. The angled cabinet means that the speaker can also be rested on a flat surface and angled towards the performer.

A 75W amplifier drives the five‑inch speaker, producing a maximum SPL of 114dB with a frequency range of 120Hz to 18kHz (+/‑ 3dB). The balanced XLR mic input offers up to 45dB of gain, while the mic EQ is a simple cut or boost, providing up to 15dB each way at a fixed frequency of 2.1kHz. The line input (which can be switched between line and instrument) and the line output both use balanced TRS jacks. The Aux in and Mix line output are also on TRS jacks, while the mic Thru socket is a balanced XLR, with the level determined by the mic gain control. The separate Mix output also has a switch to take the signal feed from before or after the main level control, which is useful. 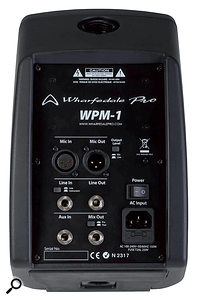 The WP1's input and output options are quite comprehensive.

There are several different ways to use the WPM1. You can feed it in the conventional way, from a foldback send on the main PA mixer, or send your vocal mic through the WPM1 and take a general mix into the monitor from the PA desk, giving you full control over the 'vocal versus the rest' balance. The mixing facilities enable the WPM1 to mix the three input signals and then feed this mix to the main PA mixer, which may be useful if you have a mixer with a limited number of inputs.

In smaller venues, I've grown to appreciate the benefit of compact personal monitors, as they can be mounted much closer to you than conventional floor monitors. You do have to take care to place them in the dead spot of the mic you happen to be using, though. For a cardioid‑pattern mic, this is directly behind, while a hypercardioid mic is usually least sensitive around 45 degrees off the rear axis. Mounting the monitor on its own mic stand allows more flexibility in positioning.

My first practical test was to use the WPM1 as an extension speaker to a Fishman acoustic guitar combo, which I use for vocals and acoustic guitar when playing small pub venues. With the EQ set flat, this setup worked really well, giving plenty of coverage and volume, while the lack of low end was completely disguised by the better bass extension of the Fishman combo.

My second test was to use the WPM1 as my personal monitor for a band gig in a medium-sized venue. This time I placed it on its angled base, sitting on top of the PA sub closest to me, so it was around 1.25 metres away and aimed directly at my head. This gave me more than enough vocal level, with no feedback issues at a sensible working level. As usual, bass from the PA filled in the low end nicely and the vocal was clear and full.

The WPM1's cabinet is not as solid as those of some competitors, but the sound is clean enough to get the job done and it carries vocals adequately. It has only a single EQ control in comparison with the Mackie SRM150's 3‑band system, for example, and it can be argued that its +/‑ 15dB range is about 12dB too much for the intended application! This isn't too much of a problem; you just have to be careful to use small amounts of EQ. In terms of maximum subjective, clean volume, though, the WPM1 measures up well.

The manual seems more concerned with the user correctly supporting the speaker than with the finer points of operation, so there's no block diagram showing the signal flow, but it doesn't take long to figure out how everything works. I particularly like the flexibility of the WPM1, with separate line (or instrument) and mic outputs available as well as a mix output, and the mounting options are also pretty all‑encompassing too.

Given its modest cost, small size, useful feature set and generally decent sound quality, the WPM1 makes a very practical alternative to bulky and often poor‑sounding and low‑output floor monitors. If monitoring is something that gives you problems, and you play mainly small and medium‑sized venues, a mini monitor just like the Wharfedale WPM1 may be exactly what you need.

The Mackie SRM150 and the VoiceSolo VSM300 XT are the closest alternatives in terms of features and price, although you could also consider the Galaxy monitoring system, with one active monitor able to power two further passive monitors.

The Wharfedale WPM1 is a practical solution for stage vocal monitoring, wherever a loud yet compact and portable device is required. While the adjustment range of the EQ is questionably large, the flexible signal routing options are attractive, and the WPM1 has plenty of volume and clarity for the stage performer.