While I’m not 100 percent sure I could define exactly what distinguishes intelligent dance music (IDM) from some other forms of electronic music production, Zero-G’s Cinematic IDM library provides over 3GB of sample material aimed at that genre. As with Electro Cinematic that I reviewed in the January 2015 issue, while this is a genre-based library, Zero-G are clearly hoping the content will appeal to music-to-picture composers as well as those involved with music-only productions. 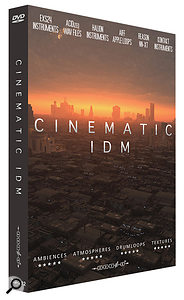 I explored the WAV files and Kontakt patches via Cubase Pro 8. The format of the library is, however, very straightforward and rather symmetrical. The material is divided into five sub-sections: ambiences, atmospheres, textures, one-shots and drum loops. In each of the first four of these you get exactly 100 samples/patches. The drum loop section is further subdivided into four tempo-based groups (90, 120, 140 and 170 bpm) and, within each of these, there are also 100 samples/loops. All rather neat.

You might, of course, be wondering what the difference is between an ambience, atmosphere and a texture. Well, for the first two of these, I’m not sure I can really tell you, but that doesn’t stop there being some really excellent ‘atmospheric ambiences’ amongst the two groups. The sounds definitely have an electronic feel and the mood lies firmly in scary sci-fi territory. The textures are distinctive, however, as there is lots of bleeping and spluttering of electronic ‘stuff’ going on; machines at work is perhaps one way of describing this section. In all three of these categories, the samples are extended in length with the textures around 10 seconds, the ambiences around 20 seconds and the atmospheres mostly running to 30-plus seconds, and some up to 60 seconds. The one-shots are all sound hits of one sort or another, but these are also quite long with a generous reverb tail. Again, the sound sources are predominantly electronic in nature.

So far, so sound design. However, the drum loops section is what glues all of this together. These really are a lot of fun and there are some great electronic drum beats with lots of interesting percussive elements and unusual electronic sounds. Many of these are almost a complete musical bed rather than just a conventional drum loop. However, blend one of the drum loops with an element from elsewhere in the library and suddenly you go from pure sound design to electronic music. So that’s what IDM is then!

For conventional music productions, Cinematic IDM is perhaps going to be a bit of a niche choice, but I can see contemporary film or media composers lapping this up for a little bit of hi-tech electronica. The blend of sound-design elements and modern electronic rhythms works very well and, at this price, some cutting-edge and ultra-cool electronic music cues are just an instant away for almost anyone. John Walden