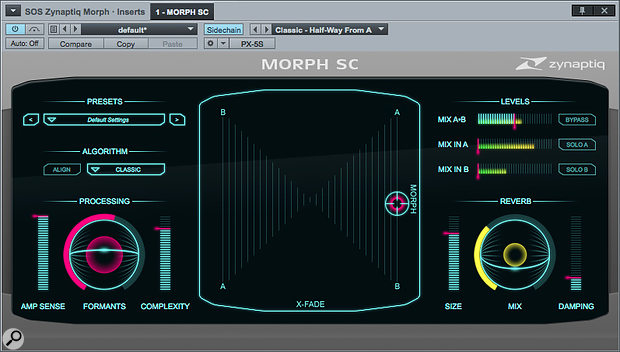 Merging two different creatures didn’t work out so well for Jeff Goldblum and co in The Fly. But what if you could merge the DNA of two different sounds instead? That’s what Zynaptiq’s Morph is all about. It’s a fascinating processor, and luckily the results are generally more thriller than horror.

Morph was originally developed more than 10 years ago, by Prosoniq (of Orange Vocoder and sonicWORX fame), but passed to Zynaptiq when Prosoniq went into liquidation in 2013. The new owners have very obligingly provided an upgrade path for Prosoniq customers, and continued to add new features to the plug-in, so it seems to be in good hands.

After making the small download and activating an iLok authorisation (a dongle-free computer activation is available), the toughest bit of getting going with Morph is establishing which version of the plug-in is the best fit for your DAW. It’s good if your mixer supports stereo side-chains, and you can use the ‘SC’ version; if not, you might need to set it up on a multi-channel bus. The PDF manual is helpful in this respect, providing setup instructions for Logic Pro X, Pro Tools, Live, Cubase/Nuendo and DP. However, I did all my testing in Studio One (which does happen to have stereo side-chains), and found it all perfectly straightforward.

Thereafter, Morph is a doddle to use. You basically direct two audio sources at it, which can be recorded audio, virtual instruments, live inputs, whatever. Then, the central X-Y field and its ‘scope’ handle let you explore combinations of those inputs with varying degrees of what you might call ‘integration’. There’s a choice of five processing algorithms: three of them sound very different from each other, and the other two provide low-latency alternatives. There’s also a very fine formant shifter, which is independently usable in its own right, and some parameters for fine-tuning the nature of the morph. Finally, there’s a simple onboard mixer and a three-parameter reverb which sounds classier and is more flexible than I was expecting. All controls are automatable, and overall the GUI is clear, responsive and intuitive.

Most importantly, what does it sound like? Well, that’s difficult to answer, because results are very dependent on the input signals. The effect can sound closely reminiscent to vocoding, especially if your inputs happened to be a lead vocal and a synth pad. But a mere vocoder this ain’t: it’s inherently much less goofy-sounding, and the potential integration of the two sources goes far deeper and is more respectful to harmonic structure and transient content. For example, if you choose to morph two different drum loops you can end up with an entirely new, crisp, complex hybrid that maintains aspects of the originals but manages to sound convincing in its own right. Engaging the Interweave or Tight algorithms helps here, as the default Classic (based on Prosoniq’s original version of the plug-in) can leave transients a bit squelchy. For melodic or sustained chordal sources, though, Classic provides the richest and fullest-sounding results. It’s also the basis of what is near-as-dammit the Harder, Better, Faster, Stronger vocal sound: choose a vocal track as one input, a buzzy solo synth as the other, swing the X-Y scope to centre-right and you’re there — the vocal suddenly conforms to the pitch and inflections of the synth (and even harmonies, if you play chords), and yet no intelligibility is lost. So many other combos suggest themselves: pianos morphed with guitars, pads with ambient field recordings, drums with arpeggiated synths Inspiring and, more importantly, controllable results can be had from all of them. Speaking for myself, Morph has frequently left me with my jaw on the floor, or animatedly exclaiming ‘Wow!’ I’d have no hesitation rating it in the very top rank of ‘creative’ plug-ins.

There are drawbacks. It’s heavy on the CPU, and even on a respectable quad-core i7 Mac I had to run high DAW buffer sizes or freeze Morphed tracks (or both) if very much else was going on in the mix. I also noticed Morph could sound rather dirty, generating various grumbles and rumbles for some source combinations, especially when one source was silent or had only low-level content. Following it up with a gate, or manually trimming the inevitable freeze or bounce is the solution.

As a plug-in for experimenters, sound designers, programmers, and anyone who likes getting off the beaten track, though, these won’t represent significant problems. In fact, Morph might just prove to be indispensable. The price of admission is worth it for loop treatment alone — it’ll make it sound like you’ve been programming for hours! Robin Bigwood