Zero-G’s Impact Designer Cinematic Slam Creator is perhaps best described as part sample library and part virtual instrument. As the ‘instrument’ in question is all about creating impact-style sound effects, it is most obviously aimed at sound designers, but lots of musical styles — rock, metal, electronica or harder-edged hip hop — could easily make use of these kinds of sounds. Potential purchasers should also note that Impact Designer requires the full version of Kontakt (5.3.1 or newer); it will not function with the free Kontakt Player.

Two elements combine in the library; 500+MB of samples covering a range of impact sounds and styles, plus a rather clever Kontakt front end that allows you to combine and process the raw samples in various ways. While you can tweak the various front-end options to customise the sounds to suit your needs, there are 90 presets already included and, usefully, these are organised into a dozen themed groups. So, depending upon the type of impact you might require, you can dip into specific folders for ‘slams’, ‘ker-booms’, ‘deep impacts’, ‘reverses’ or ‘soft impacts’, amongst others. 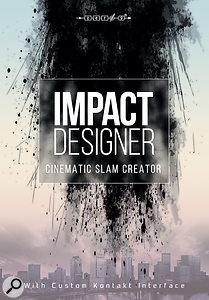 The front end itself, while seemingly uncluttered, actually provides you with plenty of options. Each impact is built on three distinct elements: hit (attack), boom (the body of the sound) and decay (the release of the sound) and, with multiple samples used for each element, even if you trigger the same impact in rapid succession, you don’t get exactly the same sound. You also have the option for adding a pre-hit (a reverse element that builds to the actual hit itself), changing the blend between the three core elements, adjusting the velocity sensitivity, pan, filter, tuning and release. Finally, on a second screen of controls, there are options for drive, compression, filter, delay and reverb effects.

And just what kind of end result does this all produce? Well, when a key member of the design team is Alessandro Camnasio, who has film trailer credits that include Transformers and Captain America, you can probably take a good guess. If you want access to an almost endless variety of sounds to recreate the noises that happen when two mega-robots smash into one another at high velocity, then Impact Designer is a pretty useful tool (unless, of course, you want to go to the bother of building said robots and miking up the results). The sounds are big, bold and, because of the options provided by the Kontakt front end, easy to customise. There are also some brilliantly heavy drum sounds embedded amongst the presets.

I’m sure sci-fi sound designers ought to lap up Impact Designer, and media composers or music producers of harder-edged music styles would also find plenty of uses in terms of musical punctuation. Impact Designer is also very keenly priced considering just how much bang, crash and wallop it can deliver. Highly recommended. John Walden