The new DBR series makes the technology from Yamaha’s established DXR speakers available at an even more wallet–friendly price.

At first glance the Yamaha DBR10 appears to be just another two–way, 10–inch ‘plastic’ speaker, but when you dig deeper you’ll discover that it incorporates 700W of Class–D amplification (325W ‘continuous’ power), and can deliver a hefty maximum SPL of 129dB. It soon becomes apparent after switching on that it’s actually pretty loud for such a small unit! Measuring 308 x 493 x 289 mm it is also a comfortable carry, and light too, at 10.5kg.

Yamaha use their own custom bass driver, comprising a two–inch voice coil and a 10–inch cone. This sits beneath a one–inch, horn–loaded compression driver, and both the tweeter and the woofer are protected by a perforated steel grille. A DSP is used to handle the crossover (an FIR filter) and speaker management functions, and the crossover frequency is 2.1kHz. 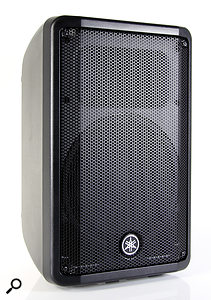 The horn coverage angle is specified as 90 degrees horizontal by 60 degrees vertical. The main body of the cabinet is moulded and includes a sensibly placed top handle, as well as the expected 35mm pole mount in the base. Yamaha tell us that the DBR series of speakers, of which the DBR10 is the smallest, benefits from the transducer, amplifier and DSP technologies developed for Yamaha’s more upmarket DSR and DXR ranges. If you need something larger than this one, then there are 12–inch and 15–inch models in the range. The DBR10 has a frequency response of 55Hz to 20kHz.

In common with many modern PA speakers, the cabinets, which include M8 rigging points, are formed with an angled rear corner (50 degrees in this case) to allow the speaker to double as a floor monitor. Another increasingly common feature that is also present here is the inclusion of basic mixing facilities, enabling the speakers to be used in stand–alone mode for simple jobs. In this case it is a two–channel mixer, where both channels are fitted with a ‘combi’ XLR/jack socket. Channel one can accept either mic or line–level inputs, while channel two is line–level only, and can accept either balanced or unbalanced line signals. There’s also an RCA phono socket for connecting portable music players and the like. Both channels have individual level controls, and channel one has a slide switch to select between mic and line sensitivity. A ‘thru’ connection is provided, with a switch to select whether both channels pass through, or to pass on the signal from channel one only. There are no EQ controls on the speaker.

I had the opportunity to try these speakers both as floor monitors and as the main PA for a pub gig. As monitors, I used them for a PA job I had doing the sound for Red Molly. They are an outstanding New York–based, all–female three–piece outfit doing close harmony vocals and accompanying themselves on slide resonator guitar, bass and acoustic guitar. We took a lot of time getting the monitor balance exactly as they wanted it, and in this role the DBR10s worked extremely well, and aimed upwards at just the correct angle. There was good clarity, no obvious feedback issues and a nice warmth to the sound. 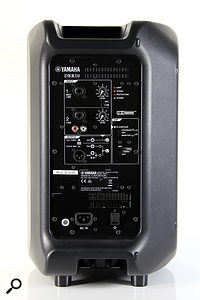 The DBR10 has a built–in mixer section, capable of accommodating one mic/line signal, one line–level signal and a stereo unbalanced line input on RCA phono.Using a pair as a small PA, handling mainly vocals and acoustic guitar, the DBR10s projected a clean and loud sound towards the audience, and though plastic cabinets invariable add some coloration of their own, everyone felt the vocal sound out front was both musical and plentiful. There were no obvious feedback issues when compared with other speakers I’ve used in the same venue, though in common with many plastic cabinet speakers I’ve tried, the sound you hear when standing behind them is pretty woolly and tubby, as plastic enclosures typically aren’t as good as wooden ones when it comes to minimising resonances. No problem if you have monitoring of course, but if you’re trying to get by without monitors, then what you’ll hear from a performer’s perspective isn’t very helpful.

If you need to plug a mic directly into the speaker, it needs to be of the type that doesn’t require phantom power, and the sensitivity may also be a little lower than you’d be used to with a mixer, but it will get you by for announcements or musical applications where effects are not required. It’s always better to have this facility than not as it could get you out of trouble if somebody pours beer into your mixing desk halfway through a gig!

The key attractions of these little speakers are that they are compact, very loud and extremely light. They deliver clean vocals with a degree of warmth, and also handle acoustic guitar and keyboard sounds pretty well, as long as you don’t ask them to handle too much low end. If you need more lows you can always add a sub. So, in all, the DBR10 is a pretty flexible little speaker, whether it’s delivering plenty of level to get your vocals across in a typical pub venue, or it’s being used as a very capable floor monitor.

The most obvious competition comes from the likes of Mackie, JBL and Alto.

If you’re looking for a compact PA speaker that punches above its weight in terms of volume and quality, this could well be it.

£372 per speaker including VAT.