While the Legacy title for Zero-G’s latest offering might not provide an unambiguous steer as to its contents, the cover art is perhaps more forthcoming, especially if you happen to be old enough to remember Ridley Scott’s classic Blade Runner (starring Harrison Ford) on first release. For its time, Blade Runner was a sci-fi game changer and, while it’s cinematic visual imagery was what caught the eye, it was the sonic underpinning that did so much to bring it to full, futuristic (and dystopian) life. That world of sound is what Legacy attempts to capture, distil, and then present to the user in a sample library format. 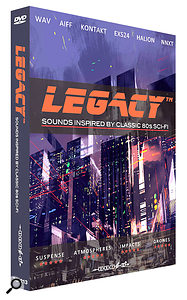 I explored the 1.6GB of Kontakt-based patches in my own testing but identical content is provided in all formats (WAV, AIFF, EXS24, Halion, NNXT). Within Kontakt, the samples are organised into six groups of presets: Atmospheres, Cinematic Effects, Drones, Impacts, Rises and Suspense. Within each group, two types of Kontakt presets are supplied: a small number of multi-sample patches, where each key triggers a different sound, and a larger number of ‘playable’ patches, where an individual sample is mapped across the keyboard. While the library is as much about sound design as music creation, some of the sounds do actually lend themselves to harmonic performance, although, in the main, these patches are perhaps intended so that you can layer the same sample at different pitches to create further variations.

The various sample group titles do a pretty good job of characterising their contents but, as with any library of this kind, its best not to get too picky about the difference between what makes a good ‘atmosphere’ sound and why that’s different from a ‘suspense’ sound. Instead, just delve in and explore. As you might expect, the Atmosphere, Drones and Suspense categories contain some longer samples while the other categories, such as Impacts, are generally shorter. Incidentally, in terms of impacts, this is more R2-D2 than Transformers; if you are after the sounds of explosions or large space ships crashing into planets, then look elsewhere.

In terms of the other sound categories, there are perhaps no great surprises in terms of the content — it is sonically exactly where you would expect it to be — but these sounds do nail the genre. And, while the homage is towards ’80s sci-fi, don’t think you are also getting ’80s sampling technology; the sounds seem to be of a consistently high quality and would not sound out of place in any professional music or sound-design context. OK, so perhaps Legacy doesn’t break any radically new sonic ground, but if you are looking for some additional sound elements for your latest film or game soundtrack in the horror, sci-fi, thriller or mystery genre — or just want to add something a little other worldly as ear candy to a musical production — Legacy will give you that sonic universe in a very convenient and inexpensive format.