Sax Supreme is not so much a collection of saxophone samples as it is a virtual instrument specifically designed to run in Native Instruments' Kontakt (version 4.2.4 or above) and be played using a MIDI controller. 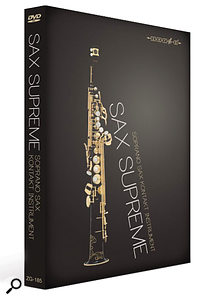 Its producers, Xfonic, have used scripts to control the playback of over 1200 samples so that, collectively, they perform like an instrument rather than individual recordings. At every opportunity, the instruction notes warn users to move the modulation wheel on their keyboards before playing any notes, as this action enables the vibrato and legato scripts. Scripts also manage seven velocity layers and four round-robin samples per note, the idea being that more or less all of the necessary expression is automatically added by the program. Indeed, the custom interface is very simple and straightforward, leaving the user with just a handful of controls to tweak.

The source instrument was a vintage soprano saxophone, recorded in an anechoic chamber so that the basic samples are neutral. Spatial characteristics are introduced by a convolution reverb with a drop-down menu of 10 simulations, ranging from a closet to a concert hall.

For realism, the producers have also made recordings of the instrument's mechanical key noises, and these can be fed into the mix by adjusting the Key On Noise and Key Off Noise level controls. The only other controls on offer are bass and treble EQ and pan and reverb level.

Getting the best from Sax Supreme requires a bit of practice — understandably, given that playing a keyboard is different from blowing and keying a wind instrument. That said, it is still easier than I imagined it would be, and sounds better. In particular, I anticipated that the instrument would fail to render fluid glissandos, yet they proved to be surprisingly smooth.

Inevitably, a little is lost in translation, but the basic sound of the source instrument is very nice indeed and could be described as warm and smooth, tending slightly towards the clarinet in terms of its character. Hitting a note hard produces a very mildly honky tone, but it isn't really possible to get that raspy sound used by jazz and rock musicians, especially those who favour alto and tenor saxophones.

By recording just one musician playing one instrument in a very particular environment, Xfonic have somewhat limited the scope of Sax Supreme. Baritone, tenor and alto sax recordings would greatly expand the sound palette, as would the performances of other musicians using their own instruments. Obviously that could increase the product's retail price, which is currently quite reasonable, but the point is that in this form it probably won't meet all of your saxophone requirements.

Sax Supreme is not a replacement for the real thing, of course, but for a lot of projects it will probably do the job. To sum up, if a vintage, mellow, soprano sound is what you're after, rather than something with more bite, this library fits the bill. Tom Flint