Zoom's latest recorder ups the ante on the features front — even including M/S recording — but remains very affordable. 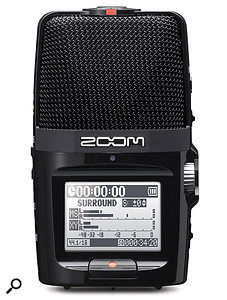 Glimpsed from afar, the H2n digital audio recorder could be mistaken for a microphone, as it has a similar shape and proportions to Neumann's popular TLM mics. Indeed, although Zoom's latest brainchild has been given the 'Handy Recorder' moniker, it also qualifies as a versatile microphone in its own right. Like Neumann's similarly shaped multi-pattern TLM 170R, the H2n offers a number of settings, but rather than using Neumann's method of altering the polar pattern characteristics of a single capsule, Zoom have installed four separate capsules (one of which is bi-directional) to enable M/S, X-Y and two flavours of '360-degree' surround recording. In other words, Zoom's recorder is not so much a microphone as a collection of them, arranged so that classic multi-mic configurations can be achieved at the turn of a dial.

Audio file-format options range from low-quality MP3s all the way up to 24-bit, 96kHz WAV files, and recordings are saved on SD/SDHD media cards of up to 32GB, which equates to many hours of CD-quality recording. One way to import the H2n's files into a DAW is to pop the SD card into a USB card reader and plug that into a computer, but the recorder also has its own USB 2 socket, and via this it can be hooked up to a computer so you can read the card directly. A second USB mode turns the recorder into an audio interface, allowing audio data to be sent directly to a DAW and making use of the H2n's headphone output for monitoring. Other notable features include an external line/mic input supplying 'plug-in power', a miniature speaker for playback monitoring and a large, bright LCD screen.

Directly behind the screen on the reverse side is a compartment for two standard AA batteries, apparently giving up to 20 hours of use — which is 16 more than the original H2. The unit itself is very lightweight, but the two batteries add about 30 percent to the overall weight, making it feel more substantial. That said, the battery lid is a reassuringly snug fit, and the build seems significantly more solid than some competitors I've reviewed in the past. 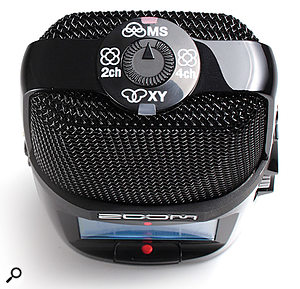 A switch on the top of the H2n allows you to select from a number of different multi-mic setups.

The designers seem to have taken a no-nonsense approach to operation. From the instant the H2n boots up, you're only ever one button-press away from recording, with no necessity to confirm settings beforehand. If changes do need to be made, pressing the Home/Menu button at the side gives immediate access to the lists of input and record options. In the Input Settings menu, the Comp/Limiter options include three compressor and three limiter types, and there are also Lo Cut and Auto Gain settings in parallel menus. The Record menu enables the setting of things like sample and bit rates, auto-record and pre‑record.

As well as these basics, there's a decent set of supplementary features, including a tuner, metronome, playback speed adjustment (from 50 to 150 percent) and the ability to set loop points and A-B repeat, plus a whole selection of file conversion and management options.

Given that the top half of the recorder is full of mic capsules and the bottom is nothing but screen, battery compartment, card slot and stand-mount socket, Zoom have had to do away with the large matrix of buttons used in the original H2 design. Instead, they've come up with a single control that seems to do almost everything just as well, while taking up almost no space at all! Labelled Play, and situated on the upper right-hand edge, the sprung button feels a little like a miniature pitch-bend wheel, and can be pressed to select menu items, pushed up or down to scroll through lists and, when a recording is loaded, takes care of play, fast forward, rewind and pause functions.

The all-important recording level is set by way of a numbered wheel found on the same side, and is reasonably easy to adjust from most hand positions. Over on the other side is a volume control for the speaker output and headphones.

Of course, the H2n's key selling point is its ability to record using any one of four different settings. The first of them is the X-Y configuration, involving a 90-degree crossed pair of mic capsules on the front of the H2n — a setup that's now fairly standard on hand-held recorders — and another pair on the rear to produce 120-degree capture. Used in unison, all four capsules combine to give you what Zoom describe as '360-degree' surround recording, the results being saved either as two stereo files ('4ch' mode) or mixed down to a single pair in '2ch' mode. As this is a combination of the 120-degree and 90-degree stereo setups, there's a degree of rejection at some points in the circle, but it could certainly be a useful facility when recording a band rehearsal, or working with several backing singers.

A number of other products have already made use of four capsules on a single hand-held device, but the H2n's setup is rather different. The second capsule pairing comprises a bi-directional 'side' capsule, producing a figure-of-eight polar pattern, and a front-facing, cardioid 'mid' capsule. These combine to make Mid/Side (M/S) recording possible. The mechanics of how M/S recording works have been extremely well documented, so there is little point in detailing it here. Suffice to say that by balancing the two capsules it's possible to manipulate the perceived stereo width of the recording. In this case, the adjustment can either be made in the recorder and saved as a stereo file, or made externally using a suitable M/S decoding programme.

Downloadable from Zoom's web site is a VST M/S Decoder plug-in for use with the copy of Steinberg's Wavelab LE7 audio editor that's bundled free with the H2n. There is, however, a slight caveat. For the plug-in to work, the recordings have to be made in M/S-RAW mode, and RAW is not an option when using the 2ch and 4ch modes. Nevertheless, the M/S width can still be adjusted using the recorder's on-board settings in M/S, 2ch and 4ch modes.

The other restriction worth mentioning is that the 96kHz sample rate is not available in 4ch mode, so 24-bit/48kHz is the closest alternative. 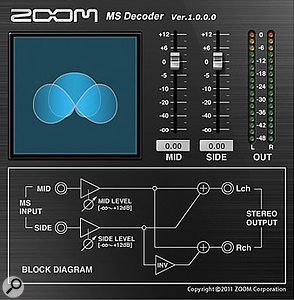 Software is available to set up and adjust Mid/Side recordings made using the H2n.

Zoom have done well to make all the mic settings extremely simple and intuitive. For example, changing the M/S spread in M/S, 2ch and 4ch modes is illustrated by an animated line drawing showing the sideways figure-of-eight pattern growing and shrinking in relation to the 'mid' cardioid mic as the field is narrowed and widened. The scale range starts at mono and then goes from -24 to +6, flashing up a message whenever significant angles such as 30, 60, 90, 120 and 150 degrees are reached. It's all very well done.

I was particularly keen to test how well the recorder worked as an audio interface. I found that, using the Audio I/F mode, I was able to select the H2n from the Windows MME driver list in Wavelab LE7 and record directly using all of the mic setups, without any problems at all.

Generally speaking, the H2n is very well designed in terms of ergonomics — you don't even have to turn it on to figure out how it's going to work! The mic-mode selector, situated on top of the recorder, is brilliantly labelled with text and informative diagrams, and two LEDs leave the user in little doubt as to whether M/S or X-Y is selected.

The universal Play button at the side feels easier to use than more complex solutions employed by other products, and every other button or menu item pretty much speaks for itself. I haven't always found Zoom's methods intuitive, but this time they really have kept things refreshingly simple.

There is, however, one significant usability problem. If the person setting up the recording is also the one performing via the built-in mics, it's pretty much impossible to see the on-screen metering and the recording indicator light when using M/S mode, because they're on the opposite side to the mics! The X-Y and M/S indicator LEDs are still visible and flash to warn of overloads, but even the manual suggests adjusting the mic gain so that the on-screen meters average -12dB.

Initially I wondered if the M/S facility would work properly or be a marketing gimmick, given that this is a budget product. I'm happy to report that I found it extremely effective. Although the parameters can be adjusted on-board, in RAW mode, I found leaving this until the mixing stage was the best option, and the M/S decoder was joyously simple to use.

The quality of the mics is about the same as those on similarly-priced products I've tested: sound quality is reasonably good, and certainly usable, but not exceptional. Importantly, handling noise is very low — all the more impressive when the entire recorder is about the price of a typical budget condenser mic!

Zoom have, once again, created an impressive product bursting with well-designed features, and the asking price is very competitive. The H2n is neither super-small nor amazingly robust, it doesn't achieve the highest quality recordings, and there's the issue I mentioned earlier relating to the screen position... but bearing in mind the price, there really is very little to complain about. For anyone not experienced in M/S recording, this would be a great way to get to grips with its qualities, particularly given that quick and easy comparison can be made with X-Y mode. Sadly, the accessory kit, comprising useful things like a case, stand, windshield and remote control, is a cost option, but on the plus side, this helps keep the price down — and, in any case, buyers will still be confident that they have got more than their money's worth.

No directly competing hand-held recorders offer M/S recording. The Alesis PalmTrack is similar in size and does both stereo and omnidirectional recording by way of multiple capsules, but is optimised for cost, not quality. Tascam's DR100 has two omni and two directional microphones, as does Roland's new R26, but both are pitched at semi-pros with deeper pockets. Now that Zoom have gone M/S, others may follow.

The H2n in no way diminishes Zoom's reputation as innovative designers. This recorder adds M/S recording to the standard X-Y configuration, and also provides basic surround recording. It's designed to be simple to use and even operates as a card reader and audio interface.