The Cable Conundrum By Paul White

At one time, you'd buy a guitar cable and if the plugs didn't fall off or short out, it was a good cable, right? Now we have esoteric guitar cables that cost as much as some guitars, and claim all kinds of tonal benefits — but can cables really make a difference, or is it all just smoke and mirrors? If you use a guitar or bass fitted with active pickups you can sit down now, because your choice of cable will make very little difference, due to the very low output impedance of active circuitry. However, if (like the majority) you use conventional passive pickups, then yes, cables do make a difference. 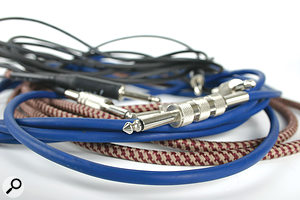 The electrical resistance of a guitar cable is insignificantly tiny compared with the impedance of the pickups and controls, so that won't affect your tone a great deal, but cable capacitance is another matter altogether. A capacitor is formed whenever two electrical conductors are in placed in close proximity, and for a given spacing, the larger the surface area of the conductors, the larger the capacitance. The core and screen conductors of typical guitar cable may produce a capacitance of around 30 picofarads per foot (or 100 picofarads per metre), so it follows that the longer the cable, the more capacitance you have hanging on the output of your guitar.

Putting a capacitor across an audio circuit creates a low‑pass filter, and given this, you might expect a long cable (or one with a higher capacitance than usual) to kill your guitar's high end — and this is exactly the argument used by those companies making esoteric guitar cable. However, there's actually far more to getting a great guitar sound than simply choosing a low‑capacitance cable.

Firstly, before anyone gave cable a second thought, guitarists were making great‑sounding records using standard guitar leads, so if you're after imitating their sounds, there's little point in seeking out an ultra‑low-capacitance cable: that would make your guitar sound brighter than theirs did. After all, the entire history of guitar sound is built on technological imperfections. Today we could make a guitar pickup with a 20Hz to 20kHz response, we could build perfect amplifiers with no audible distortion and we could connect those to state‑of‑the‑art speaker systems that cover the whole audio spectrum. But we'd hate it! It might be fine for quasi‑acoustic rhythm playing, but it just ain't rock & roll!

Another interesting and important fact about guitar cable capacitance is that it doesn't only act as a low‑pass filter. An electric guitar's pickups are made from coils of wire, which makes them highly inductive. Wire a capacitor across an inductor and you get a tuned circuit, rather like a mixing desk's mid EQ set to boost. In the case of a typical guitar, the tuned circuit is fairly well damped, because of the resistive parts in the volume and tone circuits and the resistance of the pickup coil itself, but you can still end up with a 1‑2dB hump in the response. If you choose low‑capacitance cable, the tuned circuit will resonate at a higher frequency, whereas a high‑capacitance cable will push the pickup resonance downwards. Either way, the tonality of the pickups will change.

This knowledge can be helpful, because if your instrument lacks sparkle, choosing a low-capacitance cable could improve matters significantly. What's more, you can check the outcome before spending your money by making up a very short conventional cable (a couple of feet should do the trick) and seeing how your tone changes compared with your standard cable. On the other hand, if your guitar sounds thin and lacking in punch, a standard high‑capacitance cable might actually make it sound better.

A further consideration, taking all this into account, is the behaviour of radio systems designed for guitar. Many of these ignore the cable capacitance issue, or simply put a low‑pass filter in the receiver, but that won't affect the resonant frequency of the pickups like a real cable does. If you use a radio system and find that the tone seems thinner, why not try wiring a capacitor of 200‑400pf across the jack plug at one end of the short cable that connects the guitar to the transmitter and see if that helps?

Summing up then, cables really do make a difference with guitars that have passive, magnetic pickups. However, there's no simple answer as to what type of cable will work best with your instrument because, just like the amplifier and speaker, the cable is part of your sound. Paul White