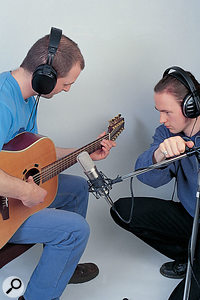 Recording satisfying acoustic guitar sounds in the home-studio environment can be difficult, particularly if the part will be prominent in the mix. Most home studios are not acoustically well balanced or quiet enough to allow optimum studio miking techniques to be used. Pickup systems of all varieties each have their own compromises too. Combining a pickup and a mic signal recorded to separate tracks offers one way forward, but often doesn't sound as satisfying as it should because the pickup tends to remain dominant in the mix until it is reduced to the point where it is almost inaudible.

The key to making this work is time alignment of the two signals, which is easily achieved if you are working with a software DAW (or a reasonably sophisticated hardware digital recorder). Normally, the pickup is heard as the dominant source because its signal always 'speaks' first — the electrical signal from the transducer under the bridge is practically instantaneous, whereas the microphone signal has to travel the distance between the guitar and the mic, and other elements of the sound take even longer as the bridge drives the top into vibration and stimulates the resonance of the body enclosure. 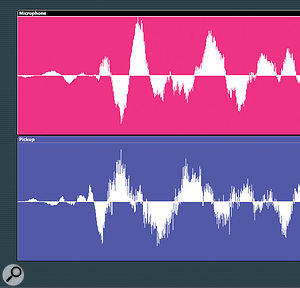 The mic signal (top waveform) can clearly be seen to lag behind the pickup (lower trace).Sound propagates in air at a speed of roughly one foot per millisecond, so if your mic is a foot away from your guitar, delaying your pickup signal by one millisecond would be a good place to start (44.1 samples if you are working at 44.1kHz sampling rate). It is only a starting point, however, for the dissimilarity between the two signals means that there is no exactly 'right' time-alignment point.

The different shapes of the waveforms make it quite difficult to decide by eye when the two tracks are optimally aligned. The best solution, I find, is simply the one that sounds best, starting from the nominal '1ms per foot' mic distance compensation and then nudging by ear until the attack of the pickup no longer dominates, but its track continues to add sustain and body to the notes.