DI Boxes & Why We Need Them 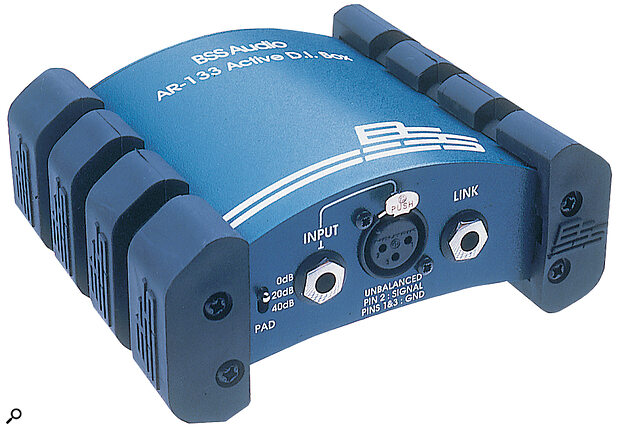 The latest model from BSS (AR‑133) features both an active input stage, and transformer isolation for bullet‑proof professional performance.

Paul White explores the role of both passive and active DI boxes in recording applications.

If you've done much in the way of recording, you'll probably have come across that apparently dull but sometimes essential studio tool, the DI, or 'Direct Injection', box. DI boxes perform two important roles: they provide electrical ground isolation between input and output, and they match the impedance of the source signal to that of the load. For example, a DI box with a high input impedance and a low output impedance may be used to match an electric guitar or bass to the input stage of a mixing console. 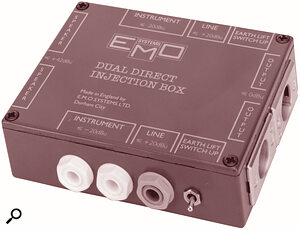 The simple transformer DI box has the advantages of simplicity, excellent electrical isolation between input and output, and lack of dependence on a power supply. Good‑quality transformers are expensive (which is why most low‑cost DI boxes are active), but transformers used on their own are limited in what they can do, by virtue of the fact that they are passive devices. If you discount any losses due to inefficiencies in the transformer, the total power going into a transformer equals the power coming out, and as power is equal to the current in Amps multiplied by voltage, it's apparent that if you step up the voltage you end up with a lower current capability. If you step up the current, on the other hand, the signal will be at a lower voltage. In the example I referred to above, where a transformer DI box is being used to match a guitar to a mixing desk, the output side of the transformer is required to deliver a higher current than the original signal source, which means a significant drop in signal voltage. To overcome this, the DI box needs to be be plugged into a console mic input, where sufficient gain is available to restore the signal level.

Even relatively inexpensive DI boxes can work extremely well, so it's worth having at least one in your tool kit.

A transformer DI box usually comprises a single transformer with a centre‑tapped secondary winding, as shown in Figure 1. The centre tap provides the ground for the output signal, the ends of the winding providing the '+ve' and '‑ve' balanced outputs. The unbalanced input is completely isolated from the output, but you can connect the input ground to the output ground if necessary, by setting the ground lift switch to 'Off'. Again, Figure 1 should make this clear. Note that the input connection has a thru socket so that the DI box can be used to take a feed from an existing signal path without breaking the signal flow. This is useful in live sound applications, where the DI box can be inserted between the instrument and its amplifier, to permit an isolated feed to be sent to the mixing console. Note that a transformer DI box doesn't necessarily provide a foolproof safeguard against electric shock in fault conditions, as it's possible that the connected cabling is grounded at some other point in the system. 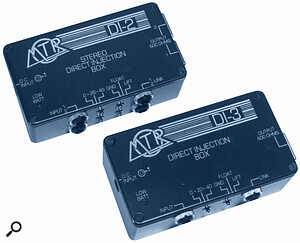 Active DI boxes such as these units from MTR, incorporate a buffering amplifier to isolate the input from loading effects.

Many active DI boxes dispense with transformers altogether — although, as mentioned at the outset, some include both active components and a transformer output stage. A typical transformerless DI circuit uses a minimum of two op‑amps to provide a 'floating' output where the input and output signal grounds are independent, but unlike the transformer, there is no true galvanic isolation. As with transformer models, ground lift switches and thru sockets are generally fitted, but because active circuitry can produce power gain, the input to output voltage ratio can be made independent of the impedance ratio. To make the devices more flexible, it's not uncommon to include switches, so that the user can choose the output level, or to provide two different output connectors, one operating at line level and one at mic level. 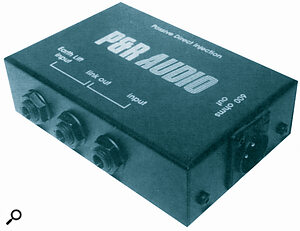 Even an inexpensive passive box with minimal facilities, such as this unit from P&R Audio, will be a useful addition to your studio armoury.

Sometimes it's desirable to take a DI feed from the speaker output of an amplifier, and both active and transformer DI boxes can do this, as long as they are fitted with an input designed to accept speaker‑level signals. Amplifiers' speaker outputs carry signals of several tens of volts, while line‑level signals are usually only around a couple of volts, so it's evident that plugging a speaker signal into a line‑level input would overload it massively, probably to the point of causing damage. Mic inputs are designed to accept signals of typically only a few thousandths of a volt in amplitude, so the effect of plugging in a speaker signal would be even more serious than in the case of the line input. DI boxes with speaker input jacks should also have thru connectors allowing connection to either the original speaker or to a dummy load. The DI output signal will be at either mic or line level and can be fed to the appropriate console input.

The simple transformer DI box has the advantages of simplicity, excellent electrical isolation between input and output, and lack of dependence on a power supply. 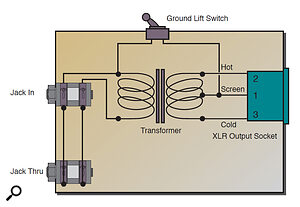 Figure 1: Transformer DI box (with ground‑lift switch and thru socket).

Guitar amplifiers and, to some extent, bass amplifiers are special cases when it comes to DI, as the final sound they produce is dramatically affected by the character of the loudspeaker cabinet through which they are played. This is largely due to the restricted top end of a typical guitar or bass speaker, so some additional circuitry is required to emulate the frequency response of a speaker cabinet if DI'ing from the speaker output of a guitar amplifier is to be really satisfactory. This type of circuitry is known as a speaker simulator, and both active and passive models are available. Passive models, such as the Palmer Junction Box, combine the elements of a DI box with those of a speaker simulator, but it must be stressed that unless the speaker simulator also contains a 'dummy' loudspeaker load, it is necessary to connect a loudspeaker to the amplifier via the thru connector of the DI box. Failure to do this will leave the amplifier running into such a high impedance that it is effectively the same as having no load connected and, depending on the amplifier type, this could do serious damage to the output stage. Figure 2 shows a combined DI box and speaker simulator connected to a guitar combo. 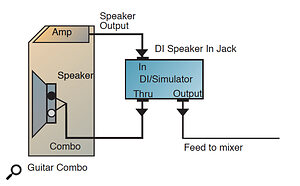 Figure 2: A combined DI box and speaker simulator connected to a guitar combo.

DI boxes are essential pieces of equipment in recording, as they allow signals from either instruments, preamps or power amplifiers to be used as recording sources without the risk of impedance mismatch or ground loop‑induced hum. This can be particularly important in live recording situations where the source from which you are recording may also be connected to the PA system. Even relatively inexpensive DI boxes can work extremely well, so it's worth having at least one in your tool kit, as they can solve problems that are very difficult to cure by other means.

DUMMY LOAD: A high power resistor that can be connected to the output of a power amplifier to make it function as though a speaker is connected, but without producing any sound.

GALVANIC ISOLATION: A transformer provides 'galvanic isolation' in that no electrical current can flow directly from one winding to the other as they are not in direct electrical contact. However, a signal can flow via electromagnetic coupling between the two windings.

GROUND LIFT: Where it is desirable to isolate the ground of one circuit from that of another, for example to prevent ground loop hum, a piece of equipment with a ground lift facility is required. In a DI box, this may simply take the form of a switch that essentially disconnects the incoming signal screen from the outgoing screen.

IMPEDANCE: Though this definition is oversimplified, impedance decribes the effective resistance of a circuit to alternating current signals such as audio signals.