Q. Are hybrid solid-state drives any good for audio?

Solid-state drives (SSDs) seem expensive, and I've seen some so-called 'hybrid' drives which combine a small solid-state element with a traditional hard drive. Obviously they give you more storage, but are these any good for audio work, and better than conventional drives, or should I steer well clear?

SOS contributor Martin Walker replies: The advertising makes hybrid drives seem tempting: they are sold as combining the capacity of a traditional mechanical hard drive with the speed of a solid-state drive, at a much lower price. In practice, however, the typical 8GB of flash storage in a hybrid drive can only speed up certain 'hot data' that you access frequently.

The significantly faster read/write speeds of an SSD can typically boost your operating system boot time by some 20 percent, and most other operations by a smaller amount, but it's the incredible improvement in application loading times that you'll notice most of all. These may appear 10 times more quickly than when loaded from a traditional hard drive!

As you might expect, any performance improvements you get from a hybrid drive will depend on the cleverness of the algorithm that decides how best to utilise the much smaller amount of solid-state memory. This Adaptive Memory Technology algorithm has to 'learn' how to use its 8GB buffer, and does so by monitoring which files are accessed most often when you boot up your computer and run your applications, and placing these in the SSD buffer.

The first time you run your operating system after installing it on a hybrid drive, its boot time could be half that of the traditional drive, but after a few boot,s this initial boot speed will gradually drop to somewhere near that 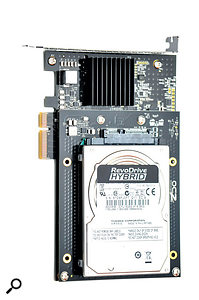 Hybrid drives, like this Revo model from OCZ, combine a traditional mechanical hard drive with a large SSD buffer that can improve system performance, but are not really worth installing for audio or sample-streaming purposes. of a traditional hard drive. No real advantage so far. However, once the algorithm has learned which applications you use most often, they could end up loading at four times the speed of the traditional hard drive, every time you need them in future.

So where does this leave the musician? Well, a hybrid drive doesn't make much sense for a dedicated audio drive, as 8GB is peanuts in this scenario, so the solid-state buffer wouldn't improve performance. Nor would it be suitable for a drive that streams sample data, for the same reason. It would be worth considering a hybrid model if you want to fit a single hard drive in a desktop or laptop computer, providing significant application speed-up at a significantly lower price than an equivalently sized SSD.

However, in my opinion, the best approach on a desktop audio computer is to install a smaller and cheaper SSD to give you the fastest boot and application loading times (128GB or even less should be suitable), alongside a much larger traditional hard drive (or a couple of them) dedicated to audio or sample streaming. This approach also helps with your backup regime, as an image of the smaller system drive can easily be backed up onto the larger data drive to guard against future problems, while your audio/sample data is already separate from the system files, ready to be backed up onto external media to protect it for posterity.