Q. Do I need to think about matching mic and preamp impedances?

SOS Technical Editor Hugh Robjohns replies: Pretty much all analogue audio these days is designed to work in a 'voltage transfer' mode, where the source is 'low impedance' and the destination is 'high impedance' — the difference between them, as you suggest, notionally being a factor of 10. It is for that reason that the typical mic output impedance is between 150 and 200Ω, and the standard mic preamp input impedance is about 10 times higher, typically ranging between 1.5 and 2kΩ. However, this is just a handy rule of thumb, to avoid 'loading' the source, and it's certainly not cast in stone. Some would argue that anything above a 1:5 ratio is fine — and your situation certainly meets that requirement.

In fact, there can be benefits in using a higher input impedance to reduce the source loading even more; Rupert Neve 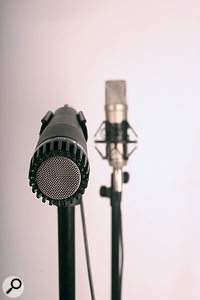 Not all mics expect to be plugged into preamps with the same input impedance — and while most expect to be greeted by an impedance many times their output impedance, many older designs, including the ubiquitous Shure SM57, were intended to work with a much lower input impedance. employed a 5kΩ input impedance in many of his preamp designs, for example, and many dedicated ribbon-mic preamps present 18kΩ or more. Then again, some dynamic mics designed back in the era of 'impedance matched' interfaces quite like to see much lower impedances, typically around the 600Ω mark. The SM57 is one such antiquity!

When it comes to line-level devices, the receiving input impedance is generally designed to be far higher — typically 100 times higher — than the source impedance, specifically so that multiple devices can be connected in parallel to one source without dragging the overall signal level down. A 10kΩ 'bridging' impedance is standard, and 47kΩ is not unusual. With this arrangement, a signal can be split to feed three paralleled destinations with less than 0.25dB loss in signal level, and six parallel splits would only cause a 0.5dB loss. It would take more than 10 splits to reduce the level by 1dB.

I discussed the whole topic of impedance as it relates to microphones, electric guitars, loudspeakers and so on, in some depth in an article in SOS January 2003 (http://sosm.ag/jan03-impedance) and if you're still wondering about all this, that article is well worth checking out.

Magneto Audio Labs' Variohm allows you to change the input impedance 'seen' by the mic, which enables you to press different mic-and-preamp combinations into service, as well as to experiment with existing ones.Hugh has hit the nail on the head when it comes to using mics in their intended applications, but it's worth discussing the subjective impact of 'mismatching' mic-output and preamp-input impedances, because when it comes to moving-coil and ribbon dynamic microphones in particular, this can open up some useful tonal options. Several mic preamps, such as those in the Focusrite ISA range, allow the user to select different input impedances. Obviously, this enables you to select an input impedance that is 'appropriate' for the mic in question, but it also allows you to experiment more creatively. With some mics, changing the preamp's input impedance will result in quite a noticeable tonal change. With others it will be hardly noticeable. Which is 'right' will depend entirely on the material you're working with and what you're trying to achieve. Of course, most mic preamps do not offer such a facility — and that means that if you like the sonic characteristics of one preamp but that preamp doesn't allow your mic to give of its best, then you'll need some other way of altering the input impedance. The Magneto Audio Labs Variohm, reviewed back in SOS Jan 12 (http://sosm.ag/jan12-magneto-variohm) is a device which allows you to do precisely that, so could be well worth investigation.