I read your feature about 'Digital Problems, Practical Solutions' (/sos/feb08/articles/digitalaudio.htm), which said that digital audio can capture and recreate analogue signals accurately, and that the 'steps' on most teaching diagrams are misleading. Does that mean that the graph should really show lines, or plot 'x's, instead of looking like a standard bar-graph?

SOS Technical Editor Hugh Robjohns replies: Good question! The graphs in that article are accurate as far as they go, but offer a very simplified view of only one part of the whole, much more complex, process.

When an analogue signal (the red line on Graph 1: Sample & Hold) is sampled, an electronic circuit detects the signal voltage at a specific moment in time (the sampling instant) and then holds that voltage as constant as it can until the next sampling instant. During that holding period the quantising circuitry works out which binary number represents the measured sample voltage. This, not surprisingly, is called a 'sample and hold' process, and that's what that diagram is trying to illustrate. 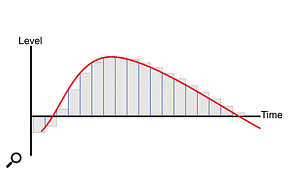 So the sampling moment is, theoretically, an instant in time, best represented on the graph as a thin vertical line at the sample intervals (the blue lines in the picture Graph 1: Sample & Hold), but the actual output of the sample and hold process is the grey bar extending to the right of the blue line.

However, the key to understanding sampling is understanding the maths behind that theoretical sampling 'instant', and that means delving into the maths of 'sinc' (sin(x)/x) functions, which is the time-domain response of a band-limited signal sample. At this point most musicians' eyes glaze over…

As we know, the measured amplitude of each sample from an analogue waveform is represented by a binary number in the digital audio system. When reconstructing the analogue waveform that number determines the height of the sinc function.

The important point is that we are not just creating a simple 'pulse' of audio at the sample point, because the sinc signal actually comprises a main sinusoidal peak at the sampling instant (and of the required amplitude), plus decaying sine wave 'ripples' that extend (theoretically for ever) both before and after that central pulse. The reconstructed analogue waveform is the sum of all the sinc functions for all the samples.

The clever bit is that the points where those decaying sinc ripples cross the zero line always occur at the adjacent sampling instants. This is shown in the next diagram (Graph 2: Two Sinc Functions) where, for simplicity, just two sample sinc functions are shown for samples 23 (red) and 27 (blue). You can see that at the intermediate sample points (26, 25, 24 and so on) the sinc functions are always zero.

That means that the ripples don't contribute to the amplitude of any other sample, but they do contribute to the amplitude of the reconstructed signal in between the samples, with the adjacent sample sinc functions having the greatest influence, and lesser contributions from the more distant samples. This is shown in the next diagram (Graph 3: 3kHz Sinc Addition), in which the sinc functions of a number of adjacent samples are shown, and when summed together produce the dotted line that is a sampled 3kHz sine waveform. 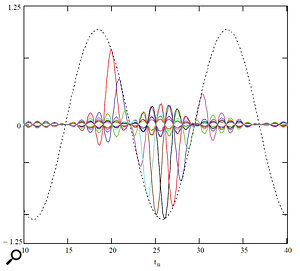 These last two diagrams have been borrowed from a superb paper by Dan Lavry (of Lavry Engineering), which explains sampling theory extremely well, and can be found here: www.lavryengineering.com/documents/Sampling_Theory.pdf.