Q. Can I correct my speakers' response with graphic EQ? Skip to main content

Q. Can I correct my speakers' response with graphic EQ? 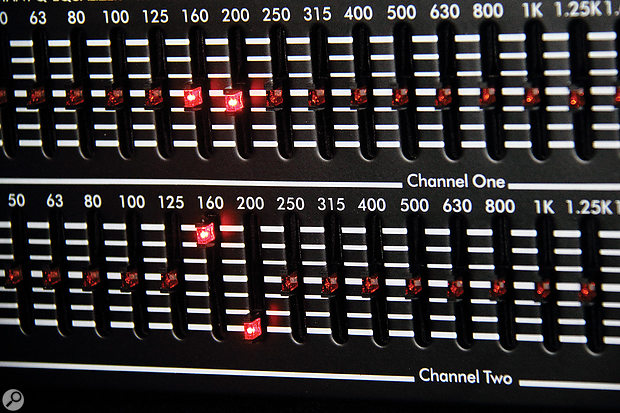 Though commonly used to adjust the monitor-speaker and room response in the studios of old, it's now generally recognised that graphic EQs aren't best suited to this task — and neither are our ears!

My KRK Rokit G4 monitors sounded inconsistent to me, so I've been adjusting their frequency response by ear using a 31-band EQ on my PC. I've done a lot of tweaks, and they now sound phenomenal, but I want to be sure I'm doing the tweaks correctly. Is the general rule of thumb for flat-response calibration as simple as listening to the full range of frequencies and listening for flatness across the spectrum — or is it based on tests done by special equipment? I've pushed some ranges as high as 10-15 dB (after -15dB pre-gain to compensate), and it sounds awesome, but I want to be sure I'm calibrating correctly.

SOS Technical Editor Hugh Robjohns replies: The fundamental problem with your approach is that our ears are rather more subjective than objective, so you may well find your results are a little variable. In particular, our perception of a flat response varies considerably with listening level.

In the 1970s it was normal for recording studios to have 31-band graphic EQs in the monitoring signal path to help tune the sound coming from the big speakers. But that idea went out of fashion as a better understanding of the importance of room acoustics developed, along with an appreciation of the potential signal degradation that can result from using that kind of equaliser.

Today, digital 'room correction' processors (both software and hardware variants) are often used to do a similar job, in the hope of achieving a flat frequency (and sometimes time) response in the room, but with far greater sophistication and precision. Such systems normally use calibration mics and work at reference signal levels, for more accurate and reliable alignment.

A conventional 31-band EQ doesn't just change the amplitude at different frequencies, it alters the phase response too — and that can also alter the sound in ways which aren't always very helpful.

Another factor to consider is that a conventional 31-band EQ doesn't just change the amplitude at different frequencies, it alters the phase response too — and that can also alter the sound in ways which aren't always very helpful. Most digital room-correction systems use linear-phase filters to avoid the phase response issues, and with a lot more precision than your 31 bands can provide.

I'm a bit concerned that you've felt the need to introduce as much as 15dB of correction. Either you're trying to correct the response beyond the bandwidth the speakers are intended to reproduce — usually to generate a low-frequency output the speaker really isn't capable of delivering — or you're trying to correct for some pretty major local reflection/cancellation issues within the room, caused by poor room acoustics.

If you're asking the bass driver to produce 15dB more low end than it was designed to deliver, for any given listening level, that will inherently stress the bass driver more and will trigger the speaker's protection circuitry at a significantly lower overall listening level than intended. It's not necessarily a problem (unless you listen at loud levels) but it is definitely something to bear in mind. If you want a lot of extra bass from speakers that aren't designed to deliver it, you might be better off repositioning the speakers closer to the back wall, or even into the corners, to benefit from the low-frequency acoustic gain that comes for free with close proximity to boundary surfaces (half- or quarter-space).

If you're finding that you need to boost strongly in very narrow frequency bands, that's a very good indication that you have significant standing-wave problems in the room, whereby the low frequencies are reflected off the walls and cancel out or attenuate the direct sound from the speakers. Different frequencies are cancelled or attenuated in different parts of the room, giving a very inconsistent overall response. In extreme cases, some bass notes can go missing completely! In this situation, which is very common, especially in smaller rooms, it would be far better to address the acoustic conditions in the room first, before resorting to any form of corrective EQ, using broadband absorbers and bass traps.