Q. Can I do what I need to with samplers, and what equipment is right for me? Skip to main content

Q. Can I do what I need to with samplers, and what equipment is right for me? 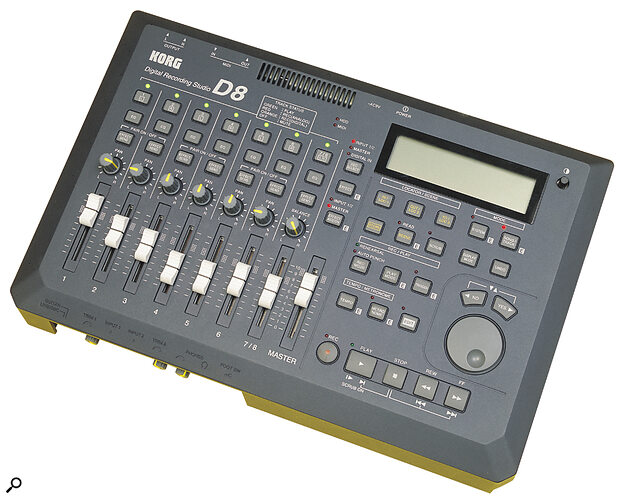 I am hoping to raise funds to purchase equipment for a home recording studio. With this I then want to write songs professionally for other artists as well as writing tracks for myself and a band I hope to form. I'm writing to you for advice on what equipment I should purchase. I am not looking at purchasing just what is cheap, but rather good‑quality equipment that will serve my exact purpose, so I'm looking particularly at equipment which has been heavily reduced from its original RRP.

I am thinking of buying a Korg D8 digital 8‑track, which can now be purchased for around £450, and Roland's VM3100 digital mixer, which looks a bargain at its current reduced price of £379. I realise that the D8 cannot record on all eight tracks simultaneously, but since I will rarely require this, does it really matter? Can I not also get around this problem by using a digital mixer with the D8 when I record a live performance?

I am also intending to buy a sampler, and would like to know more about what it is possible to do with samplers. If you're writing music using a sampler and say, for example, you sample brass, guitar or strings, how do you get the sampled sounds to play in the key of the song you're writing? Will a sampler convert the sampled sounds into the keys you want to use? Can you purchase long sample solos of guitar, bass, or brass, for example, and get these solo sounds to play over parts of your track in the right key? And are sampled sounds now so good and plentiful that one could put together tracks using the preset patterns, without having to rely on musicians? Finally, can a sampler take a track recorded by an artist and separate all the sounds on the track? For instance, say I wanted to sample Donald Fagen's voice without also recording the music in the background, or vice versa, could I do this with a sampler?

I'm not a very good keyboard player, but there seem to be many DJs mixing and remixing music successfully who, I assume, have little or no knowledge of music theory, nor can they play a musical instrument — so how do they do it? What tools do they use? Is it a case of getting a sampler and CD samples and using the CD samples as you would preset patterns to build up a track?

Assistant Editor Sam Inglis replies: To answer the last question first, I think you're probably right that most of the DJs who make remixes have little or no training in 'traditional' music skills such as keyboard playing. It's also true that samplers are probably the most important tool in remixing and much dance music generally.

Samplers can manipulate samples in a number of ways on playback, including changing their pitch — so you can, for instance, sample a note or riff and play it back a couple of semitones higher or lower to fit in with the key of your song. However, the further you change the pitch away from the original, the more noticeable the processing becomes, and shifts of more than a few semitones either way often sound very unnatural. Also, playing back samples at different pitches varies their length as well as their pitch — so if you raise the pitch of a bass line, for instance, you will also make it faster. Some modern samplers will perform true pitch‑shifting (ie. changing the pitch of a sample without altering its length) and time‑stretching (vice versa), but this process usually has some audible side‑effects.

You can use samplers in two basic ways. On the one hand, you can use them like a keyboard or sound module, where every note plays back a single note at the appropriate pitch (so, for instance, you might load up a set of electric piano samples into your sampler, whereupon playing a Middle C on your keyboard would make the sampler play an electric piano note at Middle C, playing a D would produce a D, and so on). In this sort of arrangement, your sampler would be loaded up with what is called a 'multisample': because shifting the pitch of a single sample by more than a few notes tends to sound unnatural, the sampler will actually contain lots of samples of an instrument at different pitches — so while the C sharp above Middle C in the electric piano sample would just use the same sample as the C, played back at a slightly higher pitch, the C two octaves above or below would use a different sample. In general, you'd use this sort of sampler program if you wanted to play or record an electric piano part (or clarinet, guitar or whatever) but don't own a real electric piano.

The other basic way of using samples is what is sometimes called 'phrase sampling'. In this case, your sampler is loaded up with a whole set of completely different samples such as drum loops, short bass lines or synth parts, guitar riffs, vocal phrases and so on. You would then construct a track or parts of a track either by triggering these manually (each would be assigned to a different key on your keyboard) or, more usually, from a sequencer.

Dance tracks, including remixes, are usually constructed in the latter way. You can buy sample CDs for both purposes — ie. CDs which contain multisamples of instruments playing single notes, and CDs containing various phrases and drum loops. There's a huge range of both available, and it's certainly possible to put together dance tracks just using a few samples from commercially available sample CDs. Most 'real' dance tracks tend to be a bit more sophisticated than this, however: either the creator will use his or her own samples or synth parts, or record some new vocals especially for the song, or use parts of an existing recording. They will also often use sample‑manipulation tools such as filtering, phasing, flanging and other effects. However, as you say, it's certainly not necessary to use any 'real' musicians at all, if you have a suitable set of samples, and many hit dance tracks are created just using samples.

When it comes to remixing, the remixer will usually be working from the original multitrack recording of whatever it is that is being remixed, so he or she will have access to the component sounds (drums, bass, vocals, and so on) individually. This makes it easy for them to take the bits they want and replace the bits they don't. If you're sampling from a record, CD or other form which is already 'mixed down' into stereo, your options are much more restricted. In your example, for instance, if you wanted to sample Donald Fagen's voice, you would inevitably get the background music as well; there's no way to separate them. In general, if you want to do remixes, you really need to have access to the original multitrack recording, or at least to some of its component parts.

With regard to your equipment choices, the Korg D8 is a good digital 8‑track if, as you say, you're sure you'll never need to record more than two tracks at once. The Roland VM3100 is, likewise, a good mixer. However, I'm not sure that they would make a particularly good combination: since the D8 has its own mixer built‑in, it's not really designed to be used with an external mixer like the Roland — in order to make much use of an external mixer, you'd need to have individual outputs for each of the D8's tracks, so you could send each of these tracks through a separate channel on the Roland mixer, but in fact the D8 has only stereo outputs. Having an additional mixer wouldn't allow you to record any more simultaneous tracks on the D8, though it would provide extra inputs which could be mixed together to be recorded via the D8's stereo input.

If you were to buy both, then, you would effectively be buying two mixers, which you wouldn't be able to take full advantage of, and which you might well not need. You could consider two other possible approaches. The simplest option would be to spend the same amount on just buying one unit which combines a mixer and hard‑disk recorder (such as Roland's VS880, Akai's DPS12 or, if you can stretch to it, Korg's new D16). Alternatively, you could buy a mixer such as the Roland and a digital 8‑track recorder which has no mixer section, such as Fostex's FD8, or a second‑hand Alesis ADAT. If you do this, you need to make sure that your mixer and recorder are properly integrated: for instance, to properly interface Roland's VM3100 with a digital 8‑track such as the Fostex or an ADAT, you'd need an additional converter box to convert digital signals from Roland's proprietary R‑Bus format to ADAT‑format. 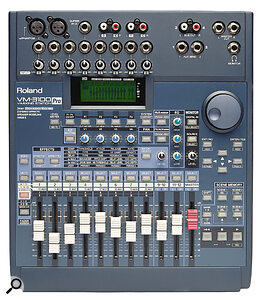 ...so there's little to be gained by adding another, like the Roland VM3100 (right).