Q. Can I get a more accurate bass sound using a subwoofer? Skip to main content

Q. Can I get a more accurate bass sound using a subwoofer? 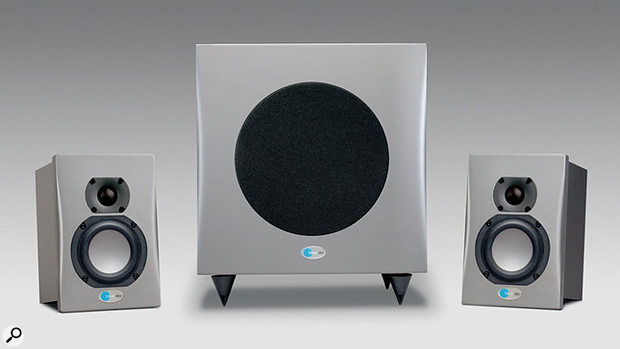 What are your opinions on having a subwoofer in the studio? I have recently demoed the Blue Sky Media Desk 2.1 system and I was very impressed by its quality and its price, but I have a few concerns. I'm worried that having a sub in my bedroom studio may cause more problems than it solves. The room is on the second floor of a semi-detached house, has thin walls and a lot of other annoyances (fitted cupboards and so on) though I will be treating the room as best I can.

There are calibration tests that you can do for the 2.1 system but I cannot afford to spend another £200 or more on a spectrum analyser kit to carry them out. How easy is it to do these kind of tests by ear, and, in any case, can the response of this sort of system be made accurate in any kind of room, no matter how unsuitable? My music tends to be quite bass-heavy (drum & bass and hip-hop), so I want as accurate a bass response as possible. I also demoed the Genelec 8030As as a stereo pair, which sound very nice, but I have read that they need their matching sub to reach their full potential (the satellites go down to 58Hz).

So, what would give me a more accurate bass response under my conditions: the 2.1 system set up as well as possible by ear, or a standard stereo setup like the 8030As?

PC music specialist Martin Walker replies: Thankfully, small Genelec monitors like the 8030As don't hype up the upper bass area just above the point where their response suddenly disappears altogether like many ported (bass reflex) speakers do, which is what helps to make them sound so natural. However, their response does fall off pretty dramatically below 58Hz, so for drum & bass or hip-hop you'll still need some low-end reinforcement from a subwoofer like Genelec's 7050A model to judge the low end of your mixes — assuming, that is, that your thin walls still make this acceptable to those on the other side! So, I suspect that whichever of these two systems you choose, you'll end up with two smaller satellites and a subwoofer.

Personally I'm always a little wary of trying to achieve really low bass in a small room, whether using a large pair of speakers or small satellites and a sub. It's certainly possible, but without some acoustic treatment most rooms already have serious problems below 200Hz that will only be aggravated by trying to generate sizeable amounts of additional low end below about 50Hz or 60Hz.

There's some good advice to be found in Mallory Nicholls' article on choosing and installing a subwoofer from SOS July 2002. One useful technique for finding the optimum position for the subwoofer, as described in SOS April 2003's Studio SOS, is to start by putting it in the centre of your listening position and then crawl around close to the wall behind the satellites until you find the spot where the bass sounds most even and balanced, then put the subwoofer there.

Adjusting its level is also crucial. Remember that if you dial in unnatural, window-rattling bass your friends may be impressed, but your mixes will sound thin on most other systems. In the absence of any test equipment other than your ears, slowly increase the relative level of the subwoofer until it just starts to draw attention to itself as a separate source, and then back it down a little — the perfect setting should seamlessly add bass to the satellites without being obvious. By listening to some familiar CDs on your setup, you can judge its settings, gain a reference point for your own mixes and gauge how well they will translate to other systems.

Mind you, if you want an accurate bass response you'll have to install at least some acoustic treatment. In most rooms, you'll encounter room modes (the resonant frequencies determined by the room's dimensions) that give an extremely lumpy bass end with several huge peaks and troughs, which would still make judging mixes of drum & bass and hip-hop extremely difficult.

You can hear these yourself by playing a bass guitar over its bottom octave (the low 'E' on a four-string is 41Hz, and the low 'B' on a five-string bass 31Hz) or a clean bass sound on a keyboard. Most of the notes should have similar volumes, but a few will be significantly louder (peaks) and a couple will probably be a lot quieter (troughs). If you don't have any other test equipment, you can just move the subwoofer a few inches at a time and try again for a smoother response until you find the best position in your room.

However, in an untreated room this response will also vary hugely depending on your listening position, with huge bass levels in the corners (where the modes pile up). In the case of a small room like yours where your listening position will probably be about halfway between the front and back of the room, with no acoustic treatment you may even find an almost complete null at one high-bass frequency at the listening position. The easiest way to hear these positional variations is to play sustained bass tones at the peak or trough frequencies you've already determined and walk around the room — I guarantee you'll be shocked at how their levels will vary.

So if you want an accurate bass end, installing some bass traps in the corners, like the Real Traps Minitraps I reviewed in SOS September 2004 will provide a good start in flattening out the response of your room, and only then will your mixes sound neutral at the listening position, but also remain reasonably consistent when you move around.