Q. Can I use multiple controllers with my software?

I'm a Propellerhead Reason user and I plan to Rewire the software to Steinberg's Cubase DAW. My plan leads me to ask two questions about using MIDI keyboard controllers and control surfaces.

First of all, is it possible to use two, three or four MIDI keyboards simultaneously in Cubase and/or in Reason without using Reason's Combinator device? A lot of the time I will want to use both my hands on two different keyboards, or route three or four keyboards to trigger different sound modules so that I don't have to use the mouse to change patches, especially during a live performance. 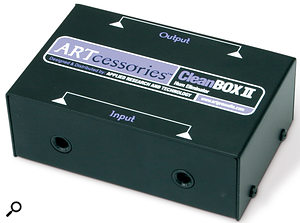 A transformer-isolating DI box such as the ART Cleanbox II can be a cost-effective solution to ground-loop hum.Secondly, I'd like to buy a fader-equipped control surface, to control the mixers in Reason and Cubase. I'm impressed with the price of Behringer's BCF2000, but then I found out that its motorised faders are not 'touch-sensitive'. How important is this feature for a control surface? Considering that I'm on a tight budget right now, do you think I should wait — say, a year — until I can afford something like Mackie Control Universal Pro?

SOS contributor Derek Johnson replies: The answer to your first question is yes, but you will need to have a MIDI interface that can handle three or four keyboards, with a MIDI In and Out port for each instrument if you plan to use the sounds generated by those instruments. In addition, more MIDI interfacing will be required for the sound modules you mention. Be aware that two or more keyboards playing simultaneously can potentially generate a lot of MIDI data, and some simple, USB 1.1-based interfaces may struggle.

In Cubase, you'll have to set up the MIDI Input for each track — new tracks default to 'All MIDI Inputs,' which is not what you're after. Obviously, you'll need to assign a track to a particular MIDI Out and MIDI channel. Note that it is possible to record on multiple MIDI channels generated by an external device (a multiple-zone controller keyboard, for example) but the data will be recorded on one track. It's simple to extract individual MIDI channels to their own separate tracks using the 'Dissolve Part' function, however.

If you're Rewiring Reason to Cubase, there's nothing else to worry about. The Rewire link routes audio to Cubase, provides bi-directional MIDI communication and full synchronisation, and (of particular interest here) allows Reason to be treated as a sound module by Cubase. From the Cubase track list, any device in Reason's rack will be available as a target to any of your controllers.

Should you want to work with Reason alone, Reason's Hardware Interface device (below) provides access to four MIDI buses — your controller keyboards are assigned to these — which can then be routed to devices in the Reason rack. The limit here is 64 devices (16 MIDI channels for each external control bus input).

Now to your second query: touch–sensitive motorised faders are a very useful tool, and it's fantastic that the option is available in the price range offered by Mackie's MCU. With touch-sensitive faders, the host software immediately goes into record mode (for fader automation) as soon as you touch a fader — even if automation is currently being played back. Recording stops when you let go of the fader, and any pre-existing automation data continues as originally recorded. Changing existing automation data without touch sensitivity is a little less spontaneous.

However, let's put this into context: motorised faders are a good thing in any shape, and Behringer's BCF2000 offers the facility at an exceedingly favourable price point (well under £150 in the UK if you know where to shop). Not many years ago, motors on your faders wouldn't have been an option at anything approaching this price. Though coming down generally in favour of touch-sensitive faders, Hugh Robjohns made a some useful points against them (or at least against leaving the touch sensitivity on all the time) in a 'Sound Advice' response back in the November 2004 issue of SOS.

If I was on a tight budget, I'd probably go for what I could afford now and enjoy a year of having hardware control over my virtual studio. Anything that takes the focus away from the mouse is going to enhance the fun and creativity in anyone's studio. Besides, you could wait forever for each new jump in technology to become affordable, or to fall within reach of your saving ability. However, no-one would blame you for wanting the MCU and being prepared to wait for it. In fact, your patience is admirable!